In any other restaurant, the scene around the table of fifteen revellers would have spawned a hundred little I'll-have-what-they're-having moments.

A whole, slow-roasted, $240 pork butt arrived first, filling the room with the smell of caramelized, oven-crusted pork fat and molten sugar. It came with a tray of oysters, a pair of tongs, a bundle of lettuce and an array of condiments. There were two Southern-fried chickens next, with a stack of scallion pancakes, and heaping platters of vegetables, too many of them to count.

They drank local beer by the gallon – literally, by the one-gallon jug, which the servers kept chilled in a silver ice bucket, draped with linen. They hooted and laughed and took pictures throughout the dinner, and finished with a whole, Quebec-style sugar pie.

But the most incredible thing about that scene at Momofuku Daisho the other week was how little of it the other tables in the restaurant, crowded around with a mix of high-gloss uptown money, and young, cool downtown grit, seemed to notice. If my own table was any indication, they were locked in their own private ecstasies, unable to conceive of anything else.

Daisho, one of three new Toronto restaurants from the New York chef David Chang, is one of the most ambitious and exhilarating places to eat in the city. So too is Momofuku Noodle Bar, the deceptively cheap and cheerful restaurant on the four-storey Momofuku complex's ground floor.

Along with Momofuku Shoto, the restaurants stand testament to the power of constant forward creative motion, to Mr. Chang's stubborn insistence that his staff must invent and evolve and incubate new ideas as much as serve exceptional food and drink.

And to his great credit, Mr. Chang has also made Daisho a distinctly Canadian enterprise, through his choice of Matt Blondin, a rising star who made his name cooking at Acadia on Clinton Street, as Daisho's chef.

His kitchen's cooking is exceptional. It builds superfine textures, uncommon ingredients and surprising combinations into gutsy, massively delicious dishes that somehow wow you with their thoughtfulness and subtlety even as they smack you in the face.

The starter called "egg," for instance. Mr. Blondin's kitchen fills a tall, gauzy nest of deep-fried potato threads and pickled red onion with cured juniper berries, smoked salmon roe and a peeled, soft-boiled duck's egg. It collapses, of course, almost as soon as you touch it, into a spectacular mix of fried potato dredged with yolk, caviar and the juniper's woodland spice.

The rice cakes are terrific, gloriously chewy in a messy, steaming, dopamine-priming pile of crumbled pork sausage and red Korean chili. Terrific, too, are the carrots that come deep-browned with birch syrup and dark malt, bathing in a pool of malted milk.

Daisho specializes in large-format meals for groups of ever-so-slightly feral diners. There are seven of them: a $270 five-lobster dinner, $125 fried chicken for six, the $600 horseradish-crusted rib eye for eight. At lunch, there's a whole Nova Scotia haddock that comes deboned, fried and stuffed into a $115 sandwich for eight. Yet they all arrive on plastic chop suey house platters. Too much of anything is great unless it's polish, Mr. Chang seems to be saying; the chef's a master at balancing high with low.

The room, with its long views over University Avenue, its soft lighting, its outstanding wine and beer list, and its all-pro service staff, is one of the city's more elegant eating spaces – he's even hired a maître d' from France to work the front door. Yet Mr. Chang has also numbered the menu, just like in Chinatown. (Another distinctly Changian curiosity: That menu does not contain a single numeral eight, which many Chinese consider the most auspicious number. He didn't want the restaurant to run too smoothly, he said.)

The first time I went to Daisho, I brought one other person. I loved the space and the food (for the most part; there were some serious issues with over-seasoning in some dishes – they appear to have been fixed), but felt I was missing the point of the place. Everything about it, from the seating (there are no two-top tables; pairs should plan to sit at the bar) to that large-format menu, is designed for parties of four or greater. Lunch service, which began last week, is better geared to singles and pairs, I'm told, but for dinner, take the hint.

On my second visit, I brought three reinforcements and ordered the fried chicken in advance. The sides came, and then a plate of duck sausage, and then the fixings for the chicken: a jar of pickled vegetables, a dish of Tabasco salt, bowls of scallion and ginger sauce, a stack of Asian herbs, pillowy scallion pancakes.

When the chicken arrived, we stripped the scalding, juicy meat from the bones, then rolled it into the pancakes, smothered with those condiments and vegetables. We hardly spoke for more than 20 minutes. I can't think of many times when I had more fun around a table this year.

The desserts are just as excellent, particularly the ice cream that was flavoured with cedar leaves; it should be required eating for any west coast Canadian. Another time, the kitchen paired guava sorbet with a dehydrated Thai basil cake that crunched like sponge toffee – they tasted extraordinary. "Oh, not that again," a friend of mine joked. 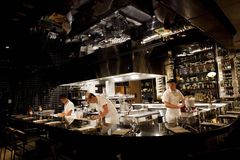 Review
Momofuku Noodle Bar Toronto: Skip the ramen – the other stuff will blow your mind
November 24, 2012 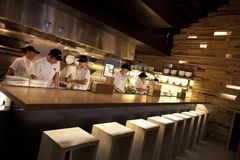 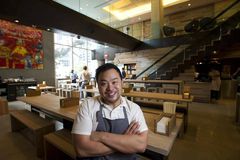