It has never been hard to recall the Momofuku Shoto dishes that deliver pleasure, that inspire appreciation. This past spring, in early March, there was a miniature bowl of warm ricotta dumplings, called gnudi, that steamed and jiggled under a smoky, creamy ham-hock glaze and a bracing piccalilli. They were rich but light, as good gnudi are – delicious enough to send a happy shudder up my spine. A few months later, near the end of May, the kitchen's riff on stir-fried beef and broccoli, fashioned from deep-crimson slices of hard-seared beef heart and a meticulously rendered bone-marrow torchon, lit up all the right pleasure centres; even better was the lobster dumpling in double-lobster broth, brightened with black vinegar and watercress crunch.

On another night, a week ago, the tasting menu's crab and red pepper soup, seasoned with smoked paprika and the floral, darkly sweet-citric acidity of pomegranate molasses, had me smiling afterward into my empty bowl. A dessert – the first of two – that combined corn ice cream with miso and butterscotch left me wishing that dinner, like summer, didn't have to end so soon.

Four years after Shoto first opened, the Momofuku Toronto complex's 22-seat tasting counter remains one of the city's better restaurants. It is still fun and friendly, an antidote to high-end eating's bygone formalities. They still play Wilco, the Jesus and Mary Chain and Radiohead (though not as loudly as in the early days) while the chefs spoon Canadian caviar onto intricately composed plates, and shave frozen foie gras over gobs of riesling gelée, a signature dish imported from Momofuku Ko in New York.

The drink pairings are beautifully considered and smartly esoteric, but never so esoteric as to make wine newbies feel overwhelmed. And the decor – you'll note the pair of manga-style prints that could have been lifted from a pimply-faced undergraduate's dorm room – remains notably spare, so that nothing risks competing with Shoto's kitchen show.

Yet as Shoto has endured, the rest of the city's high-end restaurant scene (or rather, its high mid-range; Toronto doesn't particularly have a high-end restaurant scene) has never stopped evolving. In the years since Shoto's first services, Edulis and Actinolite both adopted tasting menu formats, and have thrived because of them. Canoe developed a resurgent creativity and restlessness, pouring energy and resources into its regional Canadian tasting menus, while Buca Yorkville launched with a small but first-rate tasting counter, and Alo, high up on the third floor at Queen and Spadina, opened with the unambiguous goal – not entirely realized, but pretty close – of becoming the single-greatest restaurant in town. Each of those places delivers something far greater than mere pleasure and appreciation. Though this can vary course by course and night by night, at their best they elicit astonishment and unmitigated bliss.

After three visits to Shoto in the past seven months, I have yet to feel more than a few all-too-brief flickers of those feelings. It is an excellent restaurant run by excellent chefs and staffed by top-flight servers, but four years on (and following two chef-de-cuisine changes in the past 10 months) Shoto's seams have started showing – the execution a bit too loose some nights and the ideas verging on stale. It's a three-star restaurant these days, when in its opening months it was a four-star spot and much more than that, also. Shoto, in its early days, was "more inventive, more gleefully promiscuous with ideas and ingredients, more artfully conceived and many levels more technically masterful than anything else in the city," as I put it at the time.

Whether you notice the change depends, no doubt, on how closely you look, as well as how many times you've already eaten there. If you're new to the place, you might not notice it at all.

It would be hard to quibble with the "fried cheddar with Worcestershire" of the other week, a predinner snack that looked nothing like it sounds. It was a perfect cube, a single bite, composed from cheese and tapioca. It was crisp and golden-starchy on the outside, with an interior that tasted of Welsh rarebit, but rendered somehow into a fog. (In the minus column: The form of that snack, the toasted cube of starch and fat, is the closest Shoto's ever come to developing a signature dish, when Momofuku Ko has developed a good dozen by now.) You'd struggle not to swoon just a little with that evening's shellfish chawan mushi custard, too, another so-called snack. It was densely flavourful, all deep-marine minerality, but with the texture of cool seashore air.

I loved the pasta that night – there is almost always a tiny pasta course; it is invariably gob-smack delicious – of tortellini stuffed with black sesame – seasoned eggplant, under pecorino cheese and pickled baby corn bits that popped like comestible fireworks.

Another night's fish course, of grilled Spanish mackerel with tempura maitake mushrooms, was every bit a technical masterpiece, the tempura lacy and greaseless, and the flavours given a nice cross-cultural twist with the addition of green mango dal. The technique at Shoto is typically a) rigorously old-school, b) incredibly labour-intensive, and c) executed flawlessly. They are no slouches here. It's the ideas – the backbone of any successful multicourse tasting menu – that might leave you a little cold.

I'm not sure the other week's dinner benefited from its early sardine dish, a composition of grilled, fresh sardine, pickled tomato chutney and high-fat sour cream. They're terrific ingredients, all of them, but combined as they were, they tasted stewy and dull, like the lunch special at a 1980s Hungarian-Canadian deli. Another of that night's fish courses, black cod with an artichoke and coconut beurre blanc, was a mess of confusion. There were also olives in that dish along with the fish and that beurre blanc, as well as sorrel, cherry bomb peppers and a few slices of whelk. Nothing had good reason for being there. "Now I get why everybody just does black cod with sake and miso," my dinnermate said.

I don't think, either, that the menu's main meaty course, a play on Chinese pork with fermented black-bean sauce, was strictly necessary. It was beautifully made: the pork a piece of rib that we'd watched one of Shoto's chefs pan roast and smoke (he added a piece of smoking binchotan charcoal to the pan for flavour as it seared); the viscous sauce built up not from the usual cornstarch slurry but with carefully reduced pork and chicken stock. There were blistered green and yellow beans on the plate as well as pickled clams. But as you closed your eyes, it tasted remarkably similar to menu item 605 at New Ho King, a few blocks northwest, on Spadina Avenue. Cool trick, that, the "elevated" Chinese banquet standard. I'd rather they came up with something new.

And even Shoto's very first course had me shaking my head. With all the Momofuku company's resources and drive and its "better every day" ethos, with its famous R&D lab and its battalions of first-rate chefs, the restaurant's first act every night is still the same muffin-tin "Manitoba roll" it's served since opening month. It's a crumpet, essentially. It is not at all bad but not at all great. (And no, serving the same thing in perpetuity is not the same as having a signature dish.) The bread course at Alo, meanwhile, which is perhaps Shoto's closest competitor (and where the menu costs $25 less than Shoto's), never fails to scramble diners' minds. Even the $5 bread basket at the Maple Leaf Tavern is better than this.

As the predessert, there is always an ice cream paired with a savoury element and a bit of fruit. I've had fennel with Granny Smith apple and sweet soy, white chocolate with dill and cranberry, that terrific corn with miso butterscotch and peach, and going way back, banana with banana bread, cashew butter and mint. They've always been excellent, even if, like many of the menu's courses, the format has become predictable. Swap ingredient A for ingredient B, and so on, and boom, it's sort of, but not really, an entirely new dish.

The last time I ate there, for dessert we had strawberry sponge with pistachio sorbet and pistachio beer nuts, finished with shavings of Comté cheese that lent a powerfully savoury pong. It was nicely enough made and it was inventive, I guess. As the cap to a three-star meal, it was absolutely fine. But if not for my work, I would have forgotten it inside of an hour. 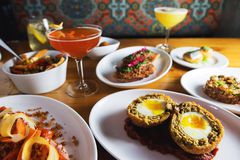 Review
Doomie’s is a failed attempt at vegan fast food in Toronto
September 2, 2016 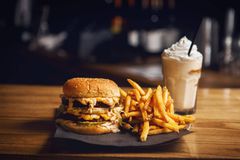 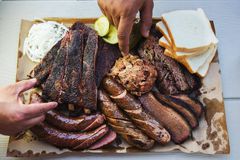