Honest Weight (A Cheap Eats pick, where you can dine well for under $30, before alcohol, tax and tip)

Paralia had a staggered opening: It launched in the summer of 2013 under the name "Trinity Taverna," and then rebranded last summer in its current incarnation. (It's complicated.) In any case, before all that, Paralia was known as The Boardwalk Café.

See the Greek dishes and seafood at Paralia for yourself

Yes, that Boardwalk Café, the one whose owner, George Foulidis, fought and lost a defamation suit against a certain crack-huffing now-former Toronto mayor, who had alleged there was something crooked about The Boardwalk Café's lease.

Mr. Foulidis's lease for the city-owned space is controversial, to put it lightly: It was granted untendered, and confers a food-service and retail monopoly over Woodbine Beach. A lot of businesspeople would kill for a location and a deal like that. The only problem is that for nine months of the year, that location is not a benefit. Paralia was near empty the two times I ate there recently. Nobody goes to out-of-the-way beachfront restaurants until it's Speedo weather.

Paralia's management is aiming to change that. The new space got a reported $4-million in renovations, and it is lovely. It's bright and airy with whitewashed walls, glass all around and a gleaming open kitchen; near the entrance there's a sprawling, ice-covered seafood display, from which patrons can select their dinner.

The cooking is modern and light – the antithesis of what you find 10 minutes north, on the Danforth. It's built on good ingredients handled with subtlety and grace.

The menu is huge. The dolmades – grape leaves stuffed with saffron rice, oxtail and yogurt – are an excellent entry point, as is the very good grilled octopus, which comes glazed with grape molasses and laid over mashed potato and garlic skordalia.

The horiatiki, an update on what's typically called "Greek salad," is made with tapenade instead of the usual mushy olives, as well as fresh oregano stems and a block of top-quality feta that the kitchen dips in egg white and sesame seeds and bakes.

The fish are done simply, grilled and then finished with olive oil, fresh oregano and lemon; you can order them bone-in (live a little! You can do it!) or filleted. They're not cheap: The sea bream sells for $37 per pound; a half-pound plate of jumbo tiger prawns goes for $34. The meats, sourced from Ontario and slow-roasted on the kitchen's souvla rotisserie, are beautifully done, particularly the jiggly tender milk-fed lamb.

I liked the creamy mushroom moussaka and loved the beef short rib with potatoes. The astakomakaronada – it is lobster pasta, by all appearances Italian except that it hates the IMF and refuses to pay its taxes – contained a whole, large lobster tail and claws when I had it, as well as a subtly spiced tomato sauce over spaghetti. It was delicious, and at $32 one of the few dishes here that felt underpriced instead of over.

Desserts were sad, particularly a baklava that was stale, tough and too sweet. (The restaurant is looking for a pastry chef, a manager told me.) The service was warm and personable; "now that's beginning to look like a Greek table," our waiter said admiringly one night as he set down a series of little dishes. It can also be pushy. "Would you like to change one of those two to the hit of the restaurant, the feta cheesecake?" that same waiter asked another evening, after we'd tried ordering a couple of desserts. It was the fourth time he'd attempted to redirect us in the past 90 minutes. It's a tough business, I get it, but this was becoming uncomfortable. I hope they'll ease up before the summertime crowds hit.

At lunchtime last Wednesday, the oysterman and sometimes restaurateur John Bil was presiding over the crowd at Honest Weight, the superb, 16-seat restaurant and fish shop he opened last January in the Junction.

Mr. Bil had B.C. and Nova Scotia halibut on ice, as well as a jumbo-sized Gulf-coast grouper, bright-eyed Spanish mackerel, West Coast salmon and rockfish (a by-catch from the lucrative sablefish fishery), kaleidoscopically complex-tasting clams and oysters from Rhode Island and Massachusetts, Salt Spring Island mussels, Ontario perch, dry-pack scallops and foie gras–like monkfish liver. An hour earlier he had also received 10 fat, radiantly silver steelhead trout that were so fresh they still bore a layer of fish slime. He cradled one in his hands at the side of our table, and offered to roast it whole.

Honest Weight is a seafood restaurant unlike any other in the city: utterly pretensionless, (relatively) inexpensive, and stocked with one of the best and freshest fish selections around.

Mr. Bil, who is 47, spent 10 years as an oyster farmer in Prince Edward Island, and another managing a salmon farm in New Brunswick. He has worked on-and-off as an oyster importer-exporter and wholesaler, too.

Mr. Bil helped open the iconic Joe Beef restaurant in Montreal a few years ago, and more recently, the Michelin-starred M. Wells Steakhouse, in Queens, N.Y. At Cabane à Sucre Au Pied de Cochon, northwest of Montreal, Mr. Bil assisted with the restaurant's seafood program, and acted in many ways as an unofficial mascot for a season, shucking oysters from behind the bar in an enormous raccoon hat. Just a few weeks ago, he catered one of the hospitality tents at the Masters tournament in Augusta, Ga. ("It's like a giant cruise ship crashed into the Superbowl and a bunch of rich white guys got off," he said.)

But until this year, he's run just one restaurant of his own: a dilapidated roadhouse and seafood shack called Ship to Shore, on the edge of PEI's Malpeque Bay. Writing for enRoute magazine in 2009, I named it one of the country's best new restaurants.

Before I continue: I've been writing about Mr. Bil for long enough that he knew exactly who I was both times I turned up unannounced at his shop. He didn't pretend otherwise. (He actually sat down and started eating our clams one day.) He is typically the first person I call when I have a seafood industry question. And so by all means ignore the rest of this if you must.

Do that, or get yourself to his shop and order the chowder, which is made with little more than a few veg, plump shellfish and 40-per-cent organic cream from Société-Orignal, heated just to temperature. That soup is so stupid-simple that you can hardly call it cooking, which is what is so decadent about it. The okonomiyaki – thick, Osaka-style seafood pancakes made with shredded cabbage, mountain yam, and hunks of seafood – are far more about the kitchen's skill, but no less tasty. They come sticky with okonomiyaki sauce, creamy from the mountain yam and kewpie mayonnaise, delicately sweet from scallops.

They do B.C. Savoury clams simply, steamed in fish stock with a few nubs of pork. You eat them with your fingers, and then dip some of the superlative sourdough into the broth. The Spanish mackerel crudo was surprisingly light and mild-tasting, set off with lime juice, Thai chillies and mango.

Mr. Bil is the rare city restaurateur who knows precisely where most of his ingredients came from, down to the farm and the farmer if it's shellfish, and the fisher if it's finned. As he works the floor, often with a tumbler of wine in hand, he'll explain the taste and textural differences between Spanish and Atlantic mackerel. On scallops, he'll say, "If as many restaurants that put the words 'diver scallops' on their menus actually served diver scallops there'd be 10,000 divers out there fishing for scallops every day." He is always dropping knowledge bombs.

As we ate a plate of Pacific halibut cheeks and Atlantic halibut fillet the other day, he talked us through their differences (they are markedly different – separate species entirely, and they taste like it).

The highlight of my two lunches there was that steelhead trout, which cost us $60. It weighed just shy of three pounds; Mr. Bil's kitchen seared it on a flattop grill and then finished it in the oven, properly to medium only so that it was translucent against the spine. There was some grilled fennel, and lemon and a few fingerling potatoes alongside it, but those hardly mattered. The fish is what matters here. Honest Weight did it exactly right.

Review
See the Greek dishes and seafood at Paralia for yourself
May 1, 2015
Review
Uncle Tetsu Japanese Cheesecake: What’s $10, a lineup and your time worth?
April 24, 2015 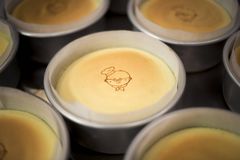 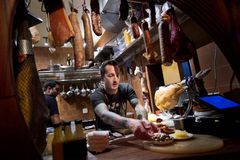