The city needs city-builders like David Stewart and Adrian Ravinsky, childhood friends who became waiters who saved up years of tip money to open 416 Snack Bar in 2011. In that little room at Bathurst and Queen, they built a singularly Toronto sort of dive bar: a dive bar with good service, candlelit tables, a thoughtful wine and beer list and a smartly executed menu that aims to celebrate the GTA's culinary diversity, from top-drawer Trini doubles to foie gras on toast.

Their newest venture takes a smaller slice of the city for inspiration: Spadina Avenue. Peoples Eatery is an homage to the Jewish delis and dairy restaurants that once kept the area's garment district fed and watered, and to the Cantonese eateries that began to replace them in the 1950s.

That's an odd mix, sure, and a tasty one when you get your mind around it. As at 416 Snack Bar, most of Peoples' dishes are small, cheap and shareable, meant to be eaten from your hands.

There are potato latkes and fried tongue sandwiches here, but also the barbecue pork dumplings called char siu bao, and very good Peking duck. The broad bean sauce that duck is served with was good enough to haunt my thoughts for several days after I first had it. Chef Dustin Gallagher, ex of Susur, Grace and Top Chef Canada, puts dried mandarin rind in it, a bitter-floral seam of brightness to bring the usual sweet brooding darkness alive.

What's most different with the new place is that its owners have developed a minor serious streak; where 416 has always felt like it's just for fun and deliciousness, the new place is their sophomore album. It has a greater mission in mind.

Artifacts of the neighbourhood are everywhere at Peoples: posters from the battle against the Spadina Expressway; a dog-eared Fiddler on The Roof LP, circa Zero Mostel. Down in the basement, they've kept the neon sign from the original People's Eatery, the old-guard Cantonese spot that the new-guard Peoples people replaced.

That juxtaposition of history, culture and setting can make the room feel at times like a very fashionable museum, a sweating, breathing, craft beer-swilling diorama of the new wedged up against a dust-rhimed display case of the old.

The front of the restaurant opens up to the sidewalk on hot summer evenings. A hunched old lady trundled by the other night, her shopping cart filled with what looked like a whole duck, with feathery sheafs of gai lan. She ogled, impassively. It's Chinatown, Jake, but maybe not for long.

Peoples' greatest attribute is Mr. Gallagher's cooking. His menu is divided into Spadina's past, present and future. From the past, his fried tongue sandwich is soft and sweet and salty, the tongue braised and sliced then griddle-fried, set with thick dill pickle slices and French's mustard onto comfortingly chewy pretzel buns. He updates whitefish salad with flying fish roe that's cured in wasabi, hot and jade green and maritime, Tel Aviv with a Tokyo stopover. He deep-fries his potato latkes so that their texture is crisp and pleasantly greasy, not dissimilar from McDonald's hash browns. They're piled with pastrami-cured trout, sour cream and salmon roe: delicious.

The Peking duck is served in three parts: soup, duck meat and stir fry. The soup, a duck consommé, was the weak link when I had it: fresh shiitake mushrooms had hijacked the flavour. The duck itself was Peking duck the way a Frenchman might do it: roasted and meaty, voluptuous-textured instead of shattering. I enjoyed it quite a lot.

By the accounting of Peoples' menu, Spadina Avenue's next evolution will be filled with chick pea and chaat masala pani puris ("crispy spicy waterbombs," the menu calls them, aptly), and Israeli-style eggplant and herb salad pitas. Can that be right? Either way, it all tastes pretty great.

(Another thing the future holds: a tasting-menu restaurant by Mr. Gallagher, upstairs, on the building's unused second storey. I look forward to that.)

I have reservations about Peoples, however – big ones that stem from the service and the design. The space is painfully loud on busy nights, which is pretty much always, especially at the back of the room, where most of the tables are. And Spadina, as ever, has its own ways of frustrating change: if you sit up front by the street and it's hot out and the breeze blows in off the street, it can stink of rotting trash.

Peoples' no-cutlery policy, a hold-over from 416, seems absurd in the face of the restaurant's few family-style platters: just try, as my table of four did one night, to eat a plate of crispy noodles and stir fried rice with only lettuce leaves to scoop it up.

Yet, most distressingly, while Mr. Stewart and Mr. Ravinsky along with their partner Matt See, have hired mostly superb front-of-house staff, they also employ one of the most consistently unpleasant servers I've encountered.

It began with the drink orders the first time I ate there. "What's good?" I asked.

The server brushed some lint off her Disney-print sweatpants, unsmiling. "It's like a strange question, right?" she answered. "Why would we serve anything that's not good? It just wouldn't be on the menu or we would not make it."

She didn't get any more helpful through the rest of the night.

The next time there, I got the same server. "If you're neglected, it's my fault," she said by way of a greeting. Whereupon she neglected us for much of the evening, leaving us with dirty plates and unfilled glasses, sometimes for 20 minutes at a stretch.

The worst of it came when a tablemate of mine asked her about the cabinet near our table: it was filled with antique-looking hats. We assumed they had something to do with the restaurant's mission, with its history. Of course we wanted to know.

"I don't know what it is," the server answered, brusquely. "It's just – it's just stuff that takes room and is annoying."

But I keep coming back in my mind to that server's answer about the cabinet.

We sat there stunned and silent, not knowing what to say. 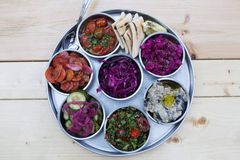 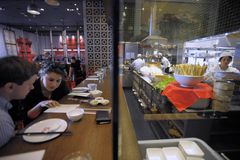 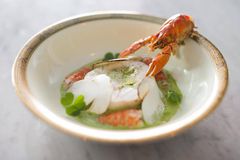