Royal Dinette, a new farm-to-table restaurant in Vancouver's downtown financial district, is co-owned by David Gunawan and Jeff Donnelly, one of the oddest couplings since Oscar and Felix.

Mr. Gunawan is the city's locavore darling. Farmer's Apprentice, his first restaurant, in Kitsilano, is a pastoral retreat for serious foodies where set menus are built around whatever vegetables were dug out of the dirt that day. Petite dishes are served on split logs and sprinkled with granola made from coffee grounds and buckwheat bits.

Mr. Donnelly, on the other hand, is the owner of a vast public house and nightclub empire. His dark, masculine cocktail taverns are appointed in taxidermy and billiard tables. The menus feature chicken wings and cheeseburgers. Bourbon and beer are the beverages of choice.

Although the partnership might seem quirky, it rubs off surprisingly – splendidly – well on both.

For Mr. Donnelly, it offers a sense of food-service integrity that he could previously only dream of. The meteoric rise is particularly dazzling when you consider that Blackbird Bistro, his company's first fine-dining foray, in the space Royal Dinette now occupies, was such a vile disaster.

For Mr. Gunawan, whose cooking can sometimes come across as precious and his philosophy dogmatic, it offers an opportunity to break out of a niche market and convert the masses "to a new awareness of food itself," as stated in a press release.

Culinary philistines need not fear. His approach is subtle. The menu is not stamped with a manifesto or long list of farmer's names. But when you walk in the front door, the first thing you see is the pasta station, where a dedicated cook spends the entire day mixing dough, rolling fresh sheets of garganelli and filling ravioli with celeriac cream. It is hypnotic to watch. If you are feeling adventurous, ask to be seated on a swivel stool at the counter-top in front of the open kitchen, where you can watch chef de cuisine Jack Chen (Mr. Gunawan's former sous chef at Farmer's Apprentice) break down a pig in the butchery station.

Well, that probably happens only once a month. But the idea is clear: Honest food should be completely transparent.

Downtown denizens still new to the farm-to-table concept might want to start with lunch. It is the dining room's busiest time of day, filled primarily with suits and smattering of woolly bearded hipsters.

The two- and three-course lunch menus ($25 and $30, respectively) are delicious, approachable and substantial. They start with a soup or salad, but not just any old limp-leaf salad. The kale option is rich, creamy and nutty, dressed with toasted sunflower seeds, crumbled sourdough and grated Parmesan.

For the main course, most people opt (understandably) for the plush and luscious seared potato gnocchi. It comes drizzled in tender roasted mushrooms and a glossy reduction that is richly sweet yet finished with vinegar for refreshing acidity. Tumbled throughout the plate you will find warmly spiced house-made bacon diced into chunky lardons, Brussels sprouts barely blanched so they are still tight and firm, and dark green arugula leaves that taste vibrantly alive and nourishing.

The gnocchi is apparently so popular the kitchen cannot take it off the menu. But the other options (also available à la carte and at dinner) are equally divine: crispy skinned ling cod in a bowl with clams and velvety vichyssoise or fork-tender beef cheeks with crushed potatoes, braised greens a brightly garlicky salsa verde.

If you go for the three-course gusto, choose the cream puff for dessert. The pastry, crisp on the outside and lacy inside, is filled with cloud-light praline Chantilly and served on a creamy bed of tart orange curd.

Dinner is a bit more challenging, for both customers and the kitchen. It will be interesting to see how the mixed clientele (which includes families, groups of gals from the office and drunken 20-somethings) warms to the adventurous menu offerings.

According to Mr. Gunawan, the five-course tasting menu is still finding its audience. Personally, I adore the creamy, custardy, pimpled texture of fresh sea urchin, especially as it is complemented here in a pool of grainy almond gazpacho adorned with slivers of soapy shiso leaves. But I cannot imagine it would taste all that appealing to the women at the next table, who were shouting, slurring and sliding off their seats.

Royal Dinette is on the main floor of Donnelly Group's Blackbird Pub. There seems to be a lot of spillover in the evening. Drunks and foodies? Shuffle board and house-fermented sunchoke beer? Chicken wings and natural orange wine?

It is an interesting mix, to say the least. But Royal Dinette's exceptionally gracious and welcoming staff appears to be winning them all over, one sour beer cocktail at a time. 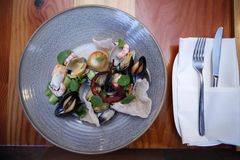 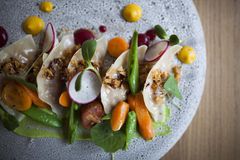 Review
Vancouver’s Giardino Restaurant can be suave when it sticks to the classics
October 23, 2015 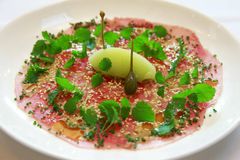