If you haven't taken the opportunity at any point over the past 64 years to stop in at Penrose Fish & Chips, on Mount Pleasant Road, you've still got a week to do it. Penrose opened in 1950, and for as long as I've lived in the city it's been the only fish and chips shop worth eating at. The tiny, grease-stained haunt has never given in to nutritional fads – they still fry their battered cod and halibut fillets in boiling beef dripping, so the fish comes out deep brown and crusty and the crust tastes dark and gorgeous and substantial and the fish sealed inside is juicy and flaky, the way fried fish might have tasted in Manchester, say, in the 1930s. Complain all you want about life in the coal mines. It can't possibly have been that bad.

Penrose was packed with moist-eyed regulars when I went there at lunch last week; the family behind the business is retiring on Oct. 10. But should you miss this opportunity, there's a new spot on St. Clair West that is very much like Penrose. Kevin Kowalczyk, who co-owns The Sea Witch with his wife Jacki Strahl, spent 11 years as Penrose's manager before leaving in January. He fries his fish – Pacific cod and halibut, haddock, char and pickerel – in beef drippings and cuts his chips fresh from whole local potatoes every day. He's built an old-time neighbourhood fish and chips shop that happens to be comfortable and family-friendly. "We're never going to do fish tacos," he told me on the phone this week. I would have hugged him if I could.

The Sea Witch's battered fish comes out of the oil puffed and sizzling, richly golden mostly, but blistered in places to the colour of stout. The crust is gloriously crunchy and just the right level of greasy, seasoned perfectly. Thankfully, the fish inside – the cod and pickerel in particular – is also exquisite.

The chips are thickly cut, skin-on, creamy-centred, excellent. Notwithstanding Penrose, I haven't found another city fish and chips shop even half this good.

The Sea Witch's tartar sauce, made from mayo, gherkins, capers and lemon juice, is good enough. The coleslaw is also fine, if ever-changing. It had the tang and texture of sauerkraut the first time I tried it; the next time it was more restrained.

There are halibut cakes and poutine available (my kid loved the poutine; I thought the gravy tasted canned). There is cheesecake for dessert, or vanilla ice cream with sprinkles for the children. If you order halibut cakes or cheesecake at a fish and chips shop, you get what you deserve.

The fried fish at Farmer's Daughter, a five-month old offshoot of Dupont Avenue's popular Farmhouse Tavern, is served with less of an eye to tradition. Chef Léonie Lilla, who was born and raised in Switzerland and spent a year on the line at Momofuku Daisho, piles a battered haddock fillet on a beef patty, sandwiching them with tartar sauce, pickles and coleslaw into a glossy, salt-flecked pretzel bun. On good nights, that burger is juicy, creamy, crunchy and messy – easily the restaurant's most successful offering. If that sounds a little bit like faint praise, well, it is.

As at its paterfarmilias up the street, the new spot has a cheap and casual feel, meant to appeal to all-comers in a begrudgingly gentrifying neighbourhood. One of Farmer's Daughter's appetizers is served in a dented metal kitchen bowl. They're different here – they fly the idiosyncratic flag proudly. But you've got to have a couple of other things in place before idiosyncrasy has any chance at charming customers. A comfortable room and consistently well-made food would be a start.

Farmhouse Tavern has imparted none of its antique wood warmth or nick-nacky charm on Farmer's Daughter. The little space is done in cheap-looking subway tiles and white-painted drywall, with too-bright lights overhead and a powerful neon wall sign that casts a cold blue glare around the room. It's all about as cozy as a proctologist's office.

Farmer's Daughter doesn't do paper menus or printed wine lists. If you'd like to see a wine list, you'll have to get up and walk over to the bar at the front, where it's scrawled in teal marker on an enormous dry-erase board – too-short-to-be-helpful descriptions ("Niagara Red $10/$45") and arrows pointing at bottles with labels that are too far away to read. This is just barely cute the first time you have to walk over, absurd when your dinner's in front of you and you'd like another glass.

The food menu is also unintelligible. The dish names are deliberately cryptic – one or two words only, rendered in small, white plastic peg letters way at the back of the room, on one of those peg boards that went out of fashion with lawn darts and thalidomide. The letters are arranged in a random mix of large and drop caps, with dollar signs standing in for S's and an upside-down 3 in one case for an E. That menu looks like a ransom note, except most ransom notes don't require a four-minute soliloquy from your server before they make any sense.

To be sure, none of this is Ms. Lilla's fault; the front-of-house is owner Darcy MacDonell's jam. I'd like to see Ms. Lilla in a restaurant where the atmosphere and service don't so handily undermine her efforts. Nonetheless her cooking, larded with modernist flourishes – with frozen yogurt spheres, dehydrated powders, balsamic soils, herb sorbets and something a server called "pancetta glue" – fails too often on fundamentals.

Early this summer, one dish included house-made mozzarella. It had the texture of mass-manufactured pizza cheese. The octopus dish came dressed with sunchoke puréeand sunchoke chips, mussels, a sausagey thing made with that pancetta glue, a swoosh of squid ink, herbs … it had been massively oversalted.

And whatever in-the-trenches-with-the-kitchen effect the restaurant hopes to achieve by serving "Staff $nack" in a metal prep bowl is quickly ruined when you realize the staff snack is a roasted marrow bone. It's nicely cooked, but the bone is too long for the bowl, so it's balanced against the rim; good luck trying to spoon out the fat without tipping it all on the table.

There's a "seasonal twinkie" for dessert, with rhubarb and elderflower the last time I had it. It tasted exactly like a Twinkie-twinkie, but with a fruity top-note instead of the usual high-summer-in-Chemical-Valley tang.

There was also a gluten-free ice cream sandwich. The ice cream part was pretty good. The sandwich part was thick and dry and tough as chipboard. Later that night, once my gums had started healing, I wondered how you'd write that on a proper menu, then realized it's better that they don't.

Atmosphere: A family-friendly, old-time chip shop, where the takeout comes swaddled in newsprint and a portrait of the famed fictional mariner Steve Zissou hangs proudly on the wall. Service can be harried.

Best bets: Fish and Chips. The cod and pickerel are standouts.

NB: No liquor licence, no reservations.

Atmosphere: If someone converted a Baskin-Robbins into a neighbourhood restaurant on the super-cheap. Hard-working service.

Wine and drinks: You'll have to get up and take a look. 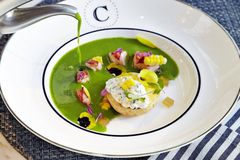 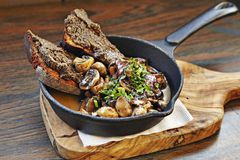 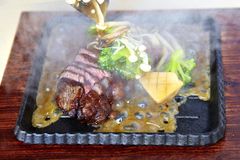