Angus An, owner of the highly acclaimed Thai restaurants Maenam and Longtail Kitchen, has expanded his rapidly growing empire with two new fast-food outlets. In the summer, he opened Fat Mao Noodles in Chinatown. Just before Christmas, he opened Freebird Chicken Shack in New Westminster's River Market. Both transcend their casual genre with cheffy refinement and are well worth visiting.

Freebird Chicken Shack is more of a take-out counter than a restaurant. Located in the River Market food court around the corner from the sit-down Longtail Kitchen, the compact Thai-style rotisserie is humbly appointed with an ordering counter, a pick-up window and a handful of kitchen-side stools.

Freebird serves two kinds of street-style Asian chicken in quarter- ($8), half- ($12) and whole-sized ($20) portions, which are also available in meal-size combos with rice and papaya salad. The chickens, from Farmcrest Foods in Salmon Arm, B.C., are free-range and hormone-free.

The roasted chicken, garnished with toasted rice and fried shallots, must be the envy of every other rotisserie in town. The meat is lusciously juicy with a golden, crisp skin all the way around. Chicken this flavourful starts, of course, with fine-quality poultry. The rotisserie chickens at Safeway do not taste this chicken-y. But the secret recipe is in the brine. These chickens are marinated overnight in coconut milk, fish sauce, puréed garlic and soy sauce. The sweetness in the coconut milk helps caramelize the skin, while the liquid plumps up the flesh to make it fall-apart tender.

Khao man gai, a Thai version of Hainanese chicken, is the second style. This silky chicken, served chopped and boneless, is salted inside and out and rested for two days. The salt draws out any impurities and intensifies the pure flavour of the chicken, enhancing its natural sweetness. After resting, the chicken is gently poached at a low simmer for 90 minutes until the meat is silky, and then later reheated to order in the rotisserie with a ladle of broth so it comes out moist and glistening.

That same broth – made from the poaching water, fortified with bones, and clarified – is served in a cup on the side. You can pour a little bit over the chicken or just drink it. The broth is also used to cook the rice (in place of water) along with a few tablespoons of chicken drippings (from the rotisserie), ginger and coriander. The rice will stop you in your tracks, guaranteed. It is incredibly aromatic and soft, but not mushy. Every granule is still separate.

Then come the sauces. There are five to choose from, or you can order the full flight for $2. In Thailand, Hainanese chicken would traditionally be served with a fermented soybean paste and garlic sauce, and the version they make here is a nicely funky puree. But the most interesting sauce is the Chinese green ginger-scallion. It is not as brightly coloured or sharply flavoured as normal. That is likely because they do not use MSG or huge amounts of salt. In fact, the flavours are very muted and the texture is very fine, like paste rather than a pesto. Although you might be taken aback at first, the flavour will definitely grow on you. It is as addictive as the chicken.

The noodle shop is a harder sell. I don't see it rolling out to every neighbourhood with the same ease as Freebird. Vancouverites have no problem paying $18 for ramen in all its various bacon-garnished, hipster glory. But when it comes to Chinese noodles, everyone wants them cheap and cooked exactly the same way their mom made them. That is not what they are going to get here.

Mr. An was born in Taiwan, and his Taiwanese beef noodles are, in my opinion, the best on the menu. You can smell the deeply dark, star-anise-scented broth the moment you step in the doorway. It overpowers everything else. The soupy broth is not quite as complex as at Chef Hung, the local bearer of the gold standard. But again, this is probably because Fat Mao does not use MSG (the ingredient that puts the oomph in most Chinese food.)

The Sichuan dan dan noodles are less creamy than usually found, and that is a good thing. The dish is still garnished with fistfuls of peanuts, but here they are chopped instead of ground, giving the sauce hefty bite and texture.

The menu also features a couple of Thai noodle soups, with more coming in the near future. The Koh soi Changmai curry noodles, served with nearly a quarter chicken, is made with good ratio of chicken stock to coconut sauce to keep it balanced and light. It is not overly creamy and pabulum-like, as are so many spoon-fed curries in this city.

None of the noodles punch you in the face with strong seasoning. As is traditional with most Asian street-stall noodles, the customer is expected to season to their own taste. Each table has a carousel of chili powders and vinegars. Add as much or as little as you like. It's authentic. But is it wise? 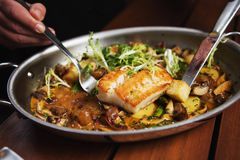 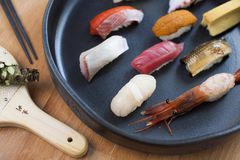 Come for the meat, stay for the veg: A wave of green is taking over Montreal's eateries
December 7, 2015 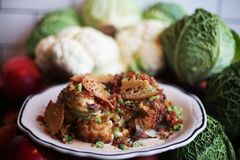