Long before the Cactus Club Café became a 29-location "creative fine dining" chain – before the B.C.-based company finally ventured east to Toronto last fall to open its three-level, 500-seat Financial District madhouse with the retracting roof and the build-out budget of lord knows how many tens of millions; before the ling cod en cocotte and the porcini mushroom pappardelle; before the fine wines and the Basquiats on the walls and the hiring regime that somehow, no doubt accidentally, ensured that almost every hostess and female server should look like a lingerie model; before the crushing crowds and the appointment of chef Rob Feenie as its "food concept architect" – the Cactus Club was my neighbourhood local.

This was Vancouver in the 1990s, on West 10th Avenue, at the edge of the University of British Columbia. I lived a block and a half away. The Cactus Club of my undergrad years was kitschy, to put it kindly: The room was decorated with rubber chickens, as well as a life-size papier mâché cow. The food was what you'd expect in such a place: nachos, burgers and chicken wings, washed down with watery beer and Kahlua-based milkshakes.

See the chef, the room and the food at Cactus Club Café

We all grow up. If you judge the company's Adelaide Street outlet – its first location east of Saskatoon – on appearances, the Cactus Club has grown up quite a lot. The complex's glass-shrouded central staircase is lit with a constellation of $20,000 Danish modern chandeliers. Its second-storey dining room has a trio of Warhols on the walls, and the focus of the lounge, if you can peel your eyes from all the television screens, is three original Basquiats, as well as a Mr. Brainwash painting of Madonna and Britney making out. I'll take even that over papier mâché cows.

Up on the rooftop deck, the rear wall is a field of green: by all appearances a vertical planting of herbs, cresses and lettuces. Earlier this week, the top-floor lunch menu even offered a salad with the name "rooftop greens." What an admirable way to demonstrate commitment to a few of the Cactus Club Café's most used corporate buzzwords: "simple," "sustainable," and "fresh."

Yet those rooftop greens must have grown on somebody else's roof. While the restaurant has no shortage of cash for pop art and design, its living wall is planted not with real, live plants but with plastic ones. Which takes moxie, I'll admit, even for a restaurant that appears to thrive on fakery and spin.

The Cactus Club Café serves more or less the same slapdash, couple-steps-up-from-the-foodcourt standards as all the other big chains, made in many cases with the same low-rent ingredients. There's nothing particularly wrong with that: With 500 seats and a booming business district lunch trade, that's what you do to get the customers in and out. And considering the location, the restaurant's generally reasonable prices aren't at all out of line.

The problems begin when the company wraps all that mass-market mediocrity in a veil of high-minded excellence, when it tries to pass itself off as an icon of "creative fine dining." The company even claims, against all evidence, to have invented the term.

What allows it to make those leaps is its association with Mr. Feenie, a onetime West Coast culinary superstar. From 1995 to 2007, he ran the kitchen at Vancouver's Lumière, a French-rooted but distinctly West Coast Canadian spot that to many minds, mine included, was one of the most accomplished restaurants, with spectacularly delicious food, that the country has ever seen.

In between the humdrum rice bowls and Cajun chicken sandwiches, the Cactus Club's menu is larded with Rob Feenie specials: with genuinely great ingredients like B.C. ling cod, and OceanWise-approved albacore tuna. There's a duo of beef served with layered, potatoes gratin-style pavé, and veal cheek and porcini pappardelle. If these were executed well, I'd applaud the restaurant, and gladly. Yet over three visits, almost none of the cooking even remotely lived up to the promises that the Cactus Club Café's menus and publicity have made.

Let's judge the place by its own standards. Let's start with this assertion by Mr. Feenie: "My whole philosophy on food is: Simplicity is much more difficult to achieve than complication." On this front, the chef is correct.

How else to explain his kitchen's tinny-tasting teriyaki chicken rice bowl, a dish so gluggy with sauce and so ineptly seasoned that even its food-court contemporaries are easily better? How about the dry, lukewarm fish tacos, or the boil-in-the-bag-quality jambalaya, or the steak frites that was chewier than a bag of uninflated birthday balloons, and which I pushed awkwardly in a bolus from cheek to cheek one day at lunch?

If the Cactus Club's kitchen finds simplicity difficult, that explains the grilled chicken salad that an unsuspecting friend ordered one evening. I've never tried a whiter, drier, sadder slab of boneless, skinless chicken breast; I didn't know whether to feel worse for my poor friend or for the chicken. It was the edible analogue to accidentally seeing your grandfather nude.

But then, much like simplicity, complexity is also an issue for the Cactus Club's kitchen. At least that was the case when I tried the lamb Medina plate. That dish, which bore the initials "RF" next to its name on the menu to signify that it's one of Mr. Feenie's creations, was composed of flavour-deficient chops, as well as raisins, Israeli couscous and some sort of sauce, on a plate that glimmered with greasy fingerprints. Its mango and mint chutney – the best thing on that dish – had been slopped on in a dark green mound as if directly from a 10-litre bucket. It looked like jailhouse food. The pappardelle also was distinctly mediocre. It felt as though none of the cooks had bothered tasting the food.

Now consider this line: "Our Toronto menu features eight dishes created just for this opening." Or to put it another way: A new, big-budget, and supposedly industry-leading creative fine-dining restaurant managed to find in itself, with two and a half years of lead time, enough creative spark to develop just eight new dishes. This is roughly the creative output an actually good restaurant achieves every a couple of weeks.

Each of those eight dishes "is a unique masterpiece and reflects the range of Chef Feenie's culinary talent," the Cactus Club website informs us. This is also correct in its way.

While the idea of serving a duo of beef – one piece braised, another one grilled – is hardly new, its Cactus Club execution absolutely qualifies as unique. I can't think of any other restaurant that serves a duo of beef with evidently unseasoned tenderloin and potato pavé that tastes as though it has never been in the same room as a grain of salt.

Mr. Feenie's ling cod en cocotte pairs a moist hunk of nicely pan-roasted fish with cippoline onions and a rich, sticky jus. Is it a masterpiece? No, it is not. The rendition I tried was fine, if instantly forgettable. The decision to serve that fish without even a glimmer of acidity to bring it alive meets my definition of "unique."

The restaurant does have redeeming features. The acoustics, particularly on the second floor, are some of the best in the city, considering the crowds. Almost every surface is designed to either absorb or scatter sound waves, so you can still have a conversation, despite often considerable background noise.

The service was generally kind, and very good at lunch-hour visits. (It was uniformly clueless one night when I turned up for dinner.)

The sourcing, too, could be far worse, considering the scale of the Cactus Club's operations. Most of the restaurant's fish, for instance, is certified sustainable by OceanWise, the respected Vancouver Aquarium seafood authority, and the company's jumbo prawns, which are all over its menu, aren't sourced from Thailand, where the industry is fuelled in part by human slavery, but from India, where the industry has far fewer known problems. (The company sent me an image of the bag those prawns come in as proof.) These are not small things.

The quinoa salad was excellent when I tried it, and Mr. Feenie's albacore tuna stack, piled into a tidy ring with avocado, coriander, crisp tempura bits and a tamari-based vinaigrette, was also exceptionally good. His squash and mascarpone ravioli, a signature Cactus Club dish, are very good, particularly with their toasted pine nuts and truffle butter sauce. There is also much to recommend his "Feenie Burger," a wide, deliciously sloppy mess of aged cheddar, tart sliced pickles, red relish, mayonnaise and (somewhat irrelevant) griddle-smashed beef, served on a glossy white bun. It's a dead ringer for the burgers at B.C.'s beloved White Spot chain, which is high praise. The fries are McDonald's good.

Still, after three visits, that's the best I can say of the restaurant's savoury cooking. As for desserts, there's grainy, un-molten molten chocolate cake and key lime pie that doesn't taste much like lime, among other throwbacks from the 1990s.

We all grow up, but sometimes it's mostly in size and in appearance. I should have asked for a Kahlua milkshake to wash those desserts down.

Review
See the chef, the room and the food at Cactus Club Café
January 15, 2016
Review
America at the Trump hotel: The food is amazing – but you shouldn’t eat here, ever
November 28, 2014 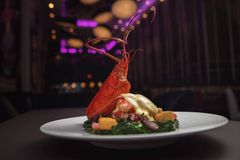 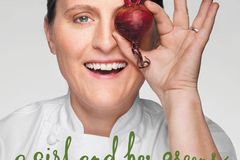 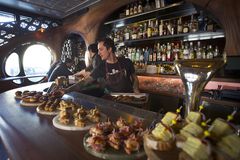