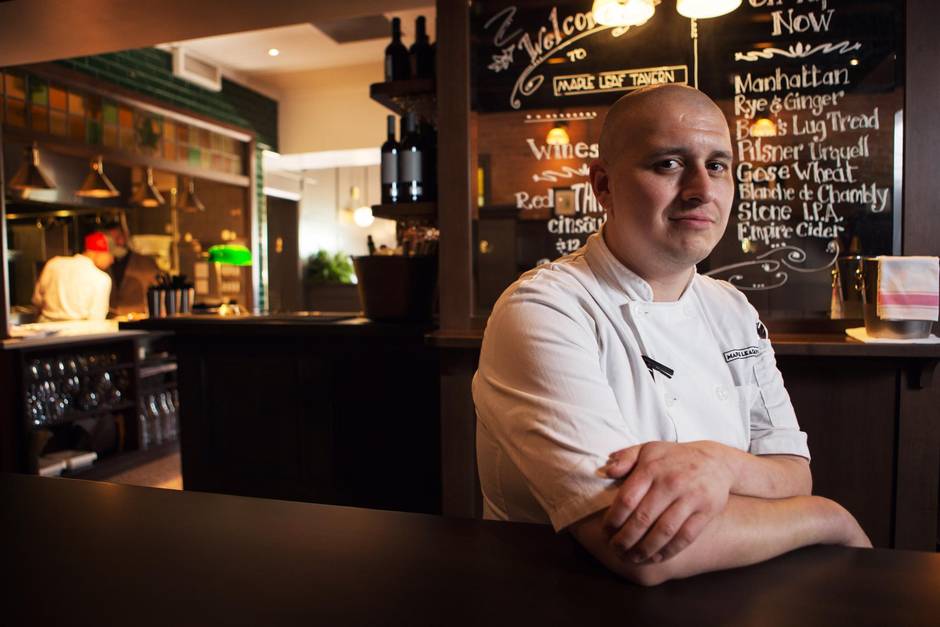 Chef Jesse Vallins is photographed at the Maple Leaf Tavern in Toronto. (Jennifer Roberts/For The Globe and Mail)

Todd Morgan bought the Maple Leaf Tavern on Gerrard Street in the summer of 2013 and soon announced, as a short entry on BlogTO put it, that he hoped to “recreate the feel of the era when the space was in its prime.” This was no small goal; he could nearly as easily have pledged to remake Road to Zanzibar, the 1941 Bob Hope and Bing Crosby comedy, using only its original cast.

Wine and drinks: Good cocktails, an extensive spirits list, lots of great craft beers and ciders and a wine list to appeal to grape geeks and greenhorns alike.

The building, which dates to before the First World War, had become known in recent decades as one of the roughest bars on the city’s east side. In 1996, a customer stabbed a young Maple Leaf Tavern server in the stomach. No big deal, really. A few years earlier, a different customer had died from a brain hemorrhage after a Maple Leaf Tavern brawl.

Mr. Morgan, who owns and operates Port Restaurant in Pickering, at least had a key advantage: When he’s not running eateries, he is the project coordinator at R B Morgan, a general contracting company his family owns. He spent two-and-a-half years gutting the building and then remaking its main floor as a remarkably elegant and comfortable bar and dining room.

Did the Maple Leaf Tavern in its prime have a gleaming open kitchen and adjustable cast-steel grill fuelled by split white oak logs? I rather doubt it. Neither, one presumes, did it serve wine from the likes of Arianna Occhipinti, the cult Sicilian producer, or whole Ontario burrata dressed tableside with cold-pressed canola oil and balsamic vinegar made from local baco noir. Yet I will happily take the Maple Leaf Tavern’s present incarnation over historical accuracy. In the two months since it opened, the place has become a terrific restaurant, and possibly the very best tavern in town. 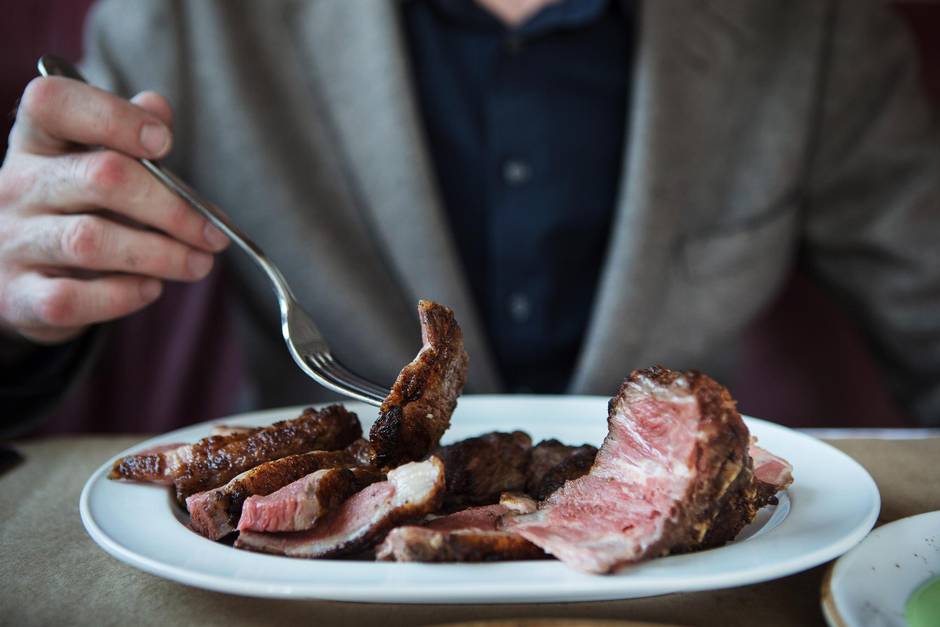 This is thanks in large part to general manager Robin Kemp (Momofuku Daisho, Colborne Lane, The Spoke Club), who runs a smart floor crew and drinks list, and especially to 36-year-old chef Jesse Vallins (The Saint Tavern, Trevor Kitchen & Bar), whose cooks seem bent on rehabilitating their customers’ notion of tavern food.

The genre, in near-constant flux through the last century or so, includes everything from French bistro standards (see The Minetta Tavern in New York) to freshmarket cooking (The Gramercy Tavern) to steaks (the name painted on the glass at Barberian’s Steakhouse, downtown, is Barberian’s Tavern) to modern farmhouse fare (The Farmhouse Tavern) to pub fare (The Queen and Beaver; The Spotted Pig). At the Maple Leaf Tavern, it’s a bit of all of this, made from scratch, with integrity.

They’re doing a far better job at everything they touch than they strictly need to do.

Earlier this month, Mr. Vallins had a spring turnip consommé on his menu: a clear, peppery broth that tasted as though it had gathered all the flavour from an entire case of vegetables. It had been finished at service with a concentrated reduction of turnip and rutabaga juice. There were two rounds of mild, deliciously fatty Italian cotechino sausage – made in-house, of course – at the bottom of the bowl, as well as an accompanying side of pickled turnip, cut like perfect dominoes. It was the sort of soup you’d expect to eat at the weather-beaten table outside a farmhouse somewhere far away, with a jug of cold, cloudy cider and a hunk of crusty bread. I absolutely loved it. (Also, they serve cold, cloudy, assertively tasty hard cider here, from Empire, near Prince Edward County.) 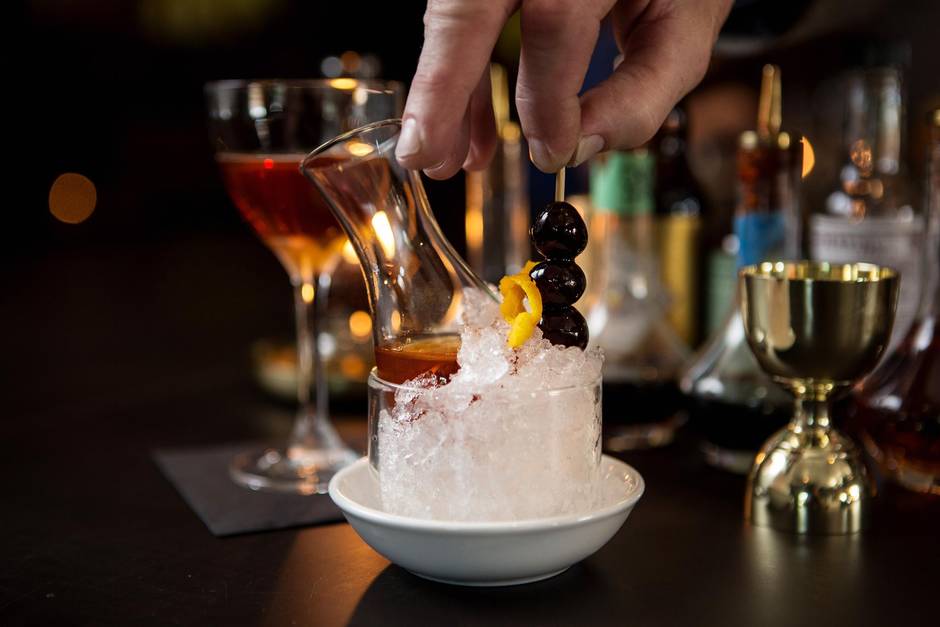 The tavern features good cocktails, an extensive spirits list, lots of great craft beers and ciders and a wine list to appeal to grape geeks and greenhorns alike. (Jennifer Roberts/For The Globe and Mail)

More typical tavern foods also get star treatment. The Maple Leaf Tavern’s Caesar salad, dressed with gleeful abandon in thickly creamy, anchovy-forward dressing and topped with a slab of grilled, single-smoked German bacon, is the rare city rendition that exceeds your hopes rather than merely meeting (or, more typically, crushing) them.

Grilled sausages are a specialty of Mr. Vallins’s; the weisswurst, a Bavarian standard made from veal and pork, spices and cream, was the best I’ve had outside Munich. Better still, you don’t even need to consume it in the presence of actual Bavarians.

The bread basket costs $5 here, a fact that has scandalized many an east-side churl gone wild. It is worth double that, crammed as it is with the likes of potato focaccia, red fife soda bread and pork-stuffed sesame buns (the bread selection changes constantly), all made in-house. 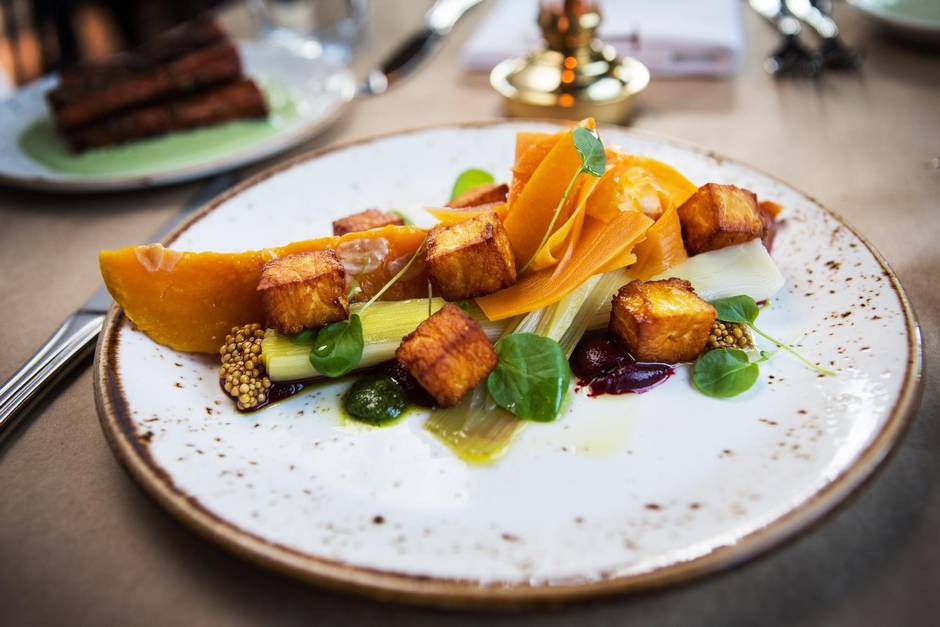 The chilled vegetable salad dish is seen at Maple Leaf Tavern in Toronto. (Jennifer Roberts/For The Globe and Mail)

The $20 cheeseburger is excellent, and the $25 special one night recently, of soft beef shoulder cooked for 72 hours in beef fat and sluiced, like meatloaf, with sweet-sour-sticky tomato-based sauce, was brilliant. It was made all the more brilliant by the pickled watermelon salad, sweet potatoes and sour cream and roasted pearl onions it came with. It tasted like church supper food from the 1970s, but executed by a very good chef.

Tavern food’s great rehabilitation began more than a decade ago; earlier still, depending how the genre is defined. Historically, taverns in Upper Canada were the same as pubs – to run either, you had to have at least four beds available for travellers. But tavern cooking shouldn’t be underestimated: It was often great. Julia Roberts, a social historian at the University of Waterloo, wrote recently of a tavern in Kingston, Ont., called Alexander Smith’s British North American, which in the mid-1800s became known for its “‘fruits and rarities,’ ‘fresh oysters,’ ‘superior spiced oysters,’ ‘choicest wines and liquors,’ ‘excellent pastry cook,’ ‘assiduous’ service, and its snipe.” Other taverns of the time served lobster and mutton chops.

Though his menu has plenty of familiar staples – steaks, that burger, pickled eggs – Mr. Vallins also does a very good halibut fillet crusted in fennel fronds, served with snow crab, ricotta gnocchi and lovage broth. (A drop more of lemon might have made the rendition I had a perfect dish.) He makes his own fermented dill pickles, and the Hasselback potatoes come with thick truffle butter sauce, and a garnish of frozen foie gras chunks that melt, like cold butter, into the tubers’ flesh.

The carrots here are roasted dark and sweet and glazed with cumin and honey, over parsley-freshened yogurt; the cauliflower is served with a whipped sauce made from long-aged cheddar. I can name a few high-end, supposedly well-reputed kitchens downtown – anyone else struggled to find their pulse at Nota Bene lately? – that don’t hold a candle. 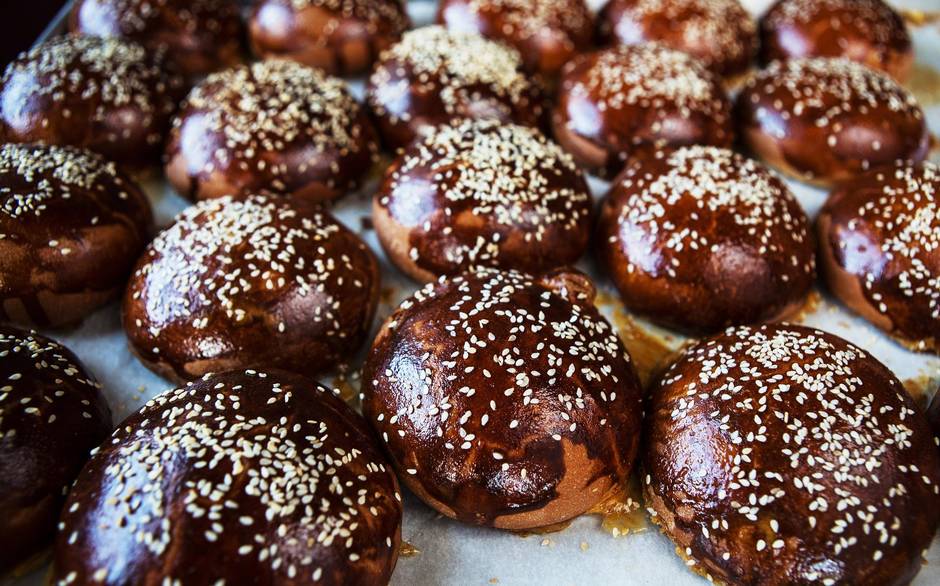 Hamburger buns are prepared at Maple Leaf Tavern in Toronto. (Jennifer Roberts/For The Globe and Mail)

And in a delicious nod to history, Mr. Vallins has mutton chops on his menu, a meat so far out of fashion that, until having it at Maple Leaf Tavern the other week, I’d never seen it on a non-South Asian menu around town. They’re quickly brined first, then let to dry in the fridge before a hot, fast turn on that wood-burning grill. The Ontario mutton is like great lamb crossed with a dry-aged ribeye: it comes sliced thickly, pink-rare and tender, with richly grassy flavour underscored by hard threads of iodine, smoke-imbued fat and animal funk. It’s a meat-lover’s meat.

If that sounds like too much, try the superbly juicy roast chicken for two, or maybe a whole-roasted fish.

Mr. Vallins’s desserts are excellent, none more than the pineapple carpaccio, which is fancy menu-speak for thin-sliced, star-anise-marinated pineapple with ginger crumble, lime curd and decadent coconut ice cream. Whether that’s traditional tavern food I can’t say, but I’ll bet that it’s one in the making for sure.