Of all the received wisdom about what you should and should not do in restaurants, the old injunction against ordering fish in a steakhouse is easily the least informed – especially if we're talking about steakhouses in Toronto. Rather than avoiding the fish, I'd make a point of ordering it, frankly. I'd do the same for just about any Toronto steakhouse's pasta. I'd even order the vegetarian option, if one's available. None of these can be as overpriced or willfully underwhelming as your average city steakhouse steak.

Though you wouldn't know this visiting a Keg, a Hy's, Harbour Sixty or Barberian's, the past decade has been a golden age of quality beef.

The variety of available cattle breeds and finishing regimes is unmatched at any point in modern history; the impact that has on texture and flavour is roughly the same as if all your life you'd drunk nothing but bargain-basement zinfandel, and then learned that all the other red varietals were suddenly available, too.

Better still, with the resurgence of careful dry-aging – a process that pulls water from the meat, as well as encouraging helpful (and tasty) enzymes – many new-wave butchers and chefs have learned to supercharge great steak's flavour, underscoring the standard mild savoury and iodine notes with nutty, earthy, deep-beefy complexity and unparalleled tenderness.

But your average Toronto steakhouse – Jacobs & Co. and Michael's on Simcoe were until last fall the only notable exceptions – is stuck in the 1970s still, slinging factory-farmed, flavour-deficient commodity meat that's aged, if you can call it that, in fluid-filled vacuum bags.

Hanif Harji and Charles Khabouth plunged into this void last November, when they opened NAO Steakhouse in a comfortable two-storey space on Avenue Road. In addition to industrial beef from Alberta, Guelph, Ont., and Nebraska, NAO has offered grass-fed steaks from Missouri, as well as several varieties of Wagyu beef – that's the densely fatty stuff; to the unaccustomed eye it looks less like meat than grease-smeared alabaster. NAO's Wagyu list, not for the light of wallet, includes pastured, $180 striploins from Australia, corn-finished porterhouses from Iowa, and top-grade, $460 Japanese Wagyu ribeyes from cows that were fattened on rice and sweet potatoes.

Mr. Harji and Mr. Khabouth, along with executive chef Stuart Cameron, know how to run a great restaurant. They're the team behind Patria, on King Street West, and Byblos, on Duncan Street. At NAO, the steak is just part of the picture; their aim is to reconsider the steakhouse from the bottom up.

The service throughout the 120-seat space is genuinely hospitable and smartly trained, with none of the usual crusty gruffness. The decor draws its inspiration from Asia far more than the old, proto-masculine cigars and club chairs. You see families in here, and tables filled with women, even a months-old infant one evening.

If you don't like steak, no problem. The non-steak menu is enormous, running from the traditional oysters Rockefeller (they are excellent here) and pommes Anna (terrible when I had them) to whole, bone-in halibut, kale salad with pickled shiitake mushrooms, fried rice "ramen-style" (kicking myself for not trying that) and collard greens stewed with kimchi.

Some of those are good, some not at all. I'll get to it in a moment. My greatest problem with NAO, and I have a few, is that its kitchen has gone only halfway on steak. Chef Cameron and his chef-de-cuisine Andrew Bradford have checked off a lot of the right boxes – Wagyu, check; pasture-fed, check; dry-aged, check – but the beef here doesn't particularly taste of much.

On my first visit, we had a $180 pasture-fed Wagyu striploin from Australia, the most expensive piece of beef I've ever eaten. Wagyu is the world's fattiest commercial cattle breed; on this front, that striploin did not disappoint. It tasted a lot like cutting the fat cap from a ribeye and eating it. It was jiggly, gut-clogging decadence, at roughly $15 per mouthful.

But if you like great steak's smoky, complex, caveman-awakening char, the sizzle and the flavour that comes with it, you're out of luck here.

To be fair, that's to some extent the nature of Wagyu: The fat is the entire point. Yet the non-Wagyu steaks were just as disappointing. A $60, 40-day dry-aged ribeye from Alberta was only steak, not bad, not good, not even remotely interesting or memorable, and not in any way aided by its cooking. You would never know it had been dry-aged if the menu didn't tell you.

Another night, my table of four asked for the most flavourful, most well-aged piece of meat in the restaurant. The result: a 32-oz, 40-day dry-aged, bone-in, USDA Prime ribeye that cost $120. The best part was the bone, which had picked up some char and salt on the kitchen's wood-burning grill. As for the meat itself, it's hard to remember much. We left the last two pieces untouched.

I blame the cooking in part. I can't put my finger on what Mr. Bradford's kitchen is doing wrong, except that they're doing it.

More than that, I blame NAO's dry-aging program: It doesn't have one. Any dry-aging its steaks get happens at NAO's supplier, and at least from what I tasted, it's not having much of an impact. It's worth noting that Jacobs & Co. sells similar steaks to NAO, but with cascading layers of complex, in-your-face meaty flavour thanks to meticulous in-house dry-aging, and it sells many of these steaks for less.

If NAO doesn't want to take on that challenge, its kitchen could easily source great beef from a top city butcher such as Cumbrae's, Oliffe or Sanagan's. That's what non-steakhouse restaurants do. The best steak I ate last year was aged 90 days and cost just $40 at DaiLo, on College Street. In the meantime, there's an untapped market opportunity in the city: the golden age of beef, at (somewhat) affordable prices. Any day now, please.

I liked some of NAO's non-steak cooking. The Dungeness crab korokke – Japanese croquettes – were loaded with top-quality crab and béchamel and enveloped in delicate panko breading. The tuna tartare is made with fresh wasabi, puffed wild rice, avocado and sesame seeds blended with the Japanese chili blend called togarashi; I've never had better. The burger is also good, though (surprise!) it tasted less like beef than the caramelized onions it was buried under.

The pommes Anna arrived at our table with no apparent sign of having been sauced, or baked. The desserts sound so, so much better than they actually are.

Both times I ate at NAO all I could think was how much better Mr. Cameron and company could have done here. I thought that, and I thought about how badly I'd like to have the cost of all that overpriced steak back. 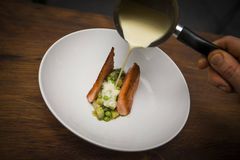 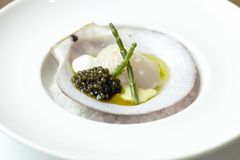 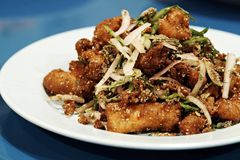