Last spring, after the chef Patrick Kriss and his front-of-house partner, Amanda Bradley, announced the first few details about the restaurant they were building, an acquaintance in the business sent me an e-mail with "Alo??" as its subject line. Alo was the name of the duo's planned venture; it would be on the third storey of a building nobody had ever noticed before at the corner of Queen and Spadina, out of sight of the street and the city; for walk-by traffic, it would be completely out-of-mind.

And Alo would be a tasting-menu restaurant. It would serve high-end, go-for-broke ambitious cooking of the sort that filled out Michelin guides and world's-best-restaurant lists, of the sort that most (but not all) of Toronto chefdom had long ago given up as out-of-fashion and not worth the trouble in any case.

"What are they thinking?" that e-mail demanded. I would have taken a stab at an answer, but I had been party to half-a-dozen similarly incredulous conversations about Alo already that week.

See the food, the room and the chef of four-star restaurant Alo

And as it turns out, they have largely done that. With Alo, Mr. Kriss and Ms. Bradley have given city diners exactly what they wanted – it's just that, until they opened the restaurant, city diners did not yet know that they wanted it.

You would never know, for instance, that you might want a warm, tiny bowl of peau de lait – that's milk skin, for the uninitiated, set and skimmed and layered into a just-warm custard so voluptuously, densely milky and buttery-sweet that proper Italian burrata seems like Cheez Whiz by comparison. You might never know that a warm tiny bowl of peau de lait with olive oil over it and a squall of chili and a single confitted San Marzano tomato can leave grown diners nearly dumbstruck with gratitude and glee.

Who would know that a simple country stew made from long-simmered duck and veal and turnips and studded with pickled wild mushrooms might be the best thing you could remember ever eating in a city restaurant? Or that a bread-and-butter service might nearly be worth the price of an entire $90 menu all on its own.

Alo's butter is churned in the restaurant's kitchen each week from local cream that Cori Murphy, its pastry chef, brings just to the edge of souring. She makes the bread every day from the leftover buttermilk: four-bite pain au lait buns that come hot from the oven, burnished on their tops to the colour and depth of polished antique mahogany, speckled with crunching fleur de sel, sweet and soft and nearly as rich on their insides as perfect croissants but also tart from that buttermilk's bite. I ate the butter like cheese, and the bread as though I had not eaten a proper meal in weeks.

Anjana Viswanatha, who is Alo's sommelier, pairs the bread and butter – yes, they get their own pairing – with a rainwater Madeira that tastes sweet and saline, light and refreshing and gently confected at its edges, as though it has been spiked with oyster liquor and Demerara caramel. If you have not utterly submitted to the restaurant's pleasures at that point, you are probably not alive.

Mr. Kriss, who is 35, started his cooking career at the Rosedale Golf Club and Auberge du Pommier before flying to New York for a two-day try-out at the star chef Daniel Boulud's flagship Daniel. That try-out turned into a three-year job as a chef de partie on Daniel's take-no-prisoners line.

Since returning home five years ago, he has worked as chef de cuisine at Splendido, as well as the chef, briefly, at Acadia, after Matt Blondin left. Yet, until Alo, he had never cooked his own food, and as long as I've been following Mr. Kriss, I could see that grate on him. He wears his ambition – not merely to be a good chef, but to be the best chef – the way many of his colleagues wear heritage pork tattoos.

Ms. Bradley, the general manager, was assistant maître d' in a Michelin-starred restaurant near France's northern coast before running the show at George, on Queen Street East. I don't know any other place in Toronto with that much high-level firepower. It should not be so surprising how fun and well-conceived and technically virtuosic the cooking is, or how smartly they have thought the service through.

One night at the restaurant's six-seat kitchen counter, dinner opened with a flurry of snacks. There were oysters on their half-shells from New Brunswick seasoned with a hot mustard-like glimmer of nasturtium, and chips and dip, but with the chips puffed round like Indian puri instead of flat: fly-away-light fried potato orbs with the crunch of Frito Lays.

On another little dish, the kitchen set a miniaturist rectangle of yellowtail tuna belly: deep pink in its middle and white toward the edges, crusted on two sides in smooth golden brown. The crusts, we soon learned, were buttered, toasted white bread, but cut only as thick as prosciutto slices; each of the assemblages bore a dot of aioli and a tiny celery leaf. Mr. Kriss had cheekily called it "tasting of hamachi." It was the tuna sandwich of a seafood-lover's dreams.

They brought bowls of broken rice that tasted like kettle popcorn but with the texture of loose risotto, and poured grassy, dark-hued butter from Normandy over top. They brought bowls of B.C. crab with fresh creamed corn, shot through with lemon and the earthy-flavoured corn fungus called huitlacoche, with chili peppers and the unmistakable summer campfire smell of smoking corn husks.

We had dry-aged lamb, and pork rack and belly that Mr. Kriss's butcher, Jason Custodio, dry-ages for a month. The flavour of those meats was almost improbably full and concentrated. I had never encountered dry-aged lamb or rack of pork before.

Ms. Viswanatha, the sommelier, does not follow the usual rules. Her superb and idiosyncratic wine list, not to mention the wine pairings, are all the better for this. With that crab and corn course, she did not pour the expected Chardonnay, but a Savennières that was all stony minerality and petrol with a gorgeous honeyed edge about it; for the broken rice and butter, an unctuously rich and almost milky-textured but quenching Melon de Bourgogne that had aged six years. For that duck and veal and pickled mushroom stew – it comes buried under a downy quilt of foie gras shavings, by the way – Ms. Viswanatha poured a Rousillon from 2003 that had mellowed to the point of sheer, blissful perfection: It was a meaty, chewy, velvety country wine that tasted like stewed fruit and spice at its edges, with a juicy, refreshing liveliness at its core.

That glass of old red wine in particular said a lot about the ethic here – they do not seem to serve or do anything at Alo unless they can do it in its most perfect form. The wines and cheeses are perfectly aged, the butter fresh-made, the plums with dessert are the best plums you've ever eaten, the cheese twists served hot and almost ridiculously fresh. The food in Alo's bar is, by far, the best bar food in Toronto – check out the spiced lamb and yogurt number with the (freshly made) mini chapatis. The ice in the cocktails at Alo is gemstone-clear and chipped by hand; the cocktails are among the most expertly made I've had.

And Ms. Bradley's service team has somehow stripped away everything that is extraneous and annoying about fine-dining service. What's left is knowing, quietly confident, expertly choreographed hospitality, imbued with a spirit of lightness. They have not left a single thing to chance.

My second time, in the bar, there was a concord grape and meringue number that I'd happily drown in if I were allowed the chance. On a third visit, for the final dessert bite, Ms. Murphy made cannelés. She bakes them to order and then pops them carefully from their copper moulds; they're crunchy and caramelized-sugar sweet on the outside, but collapse into bourbon-flavoured custard the instant you bite in.

By the time we got them, we had spent a couple of hours eating and drinking and whispering quietly – okay, not whispering, and not quietly – about how fresh and daring and extraordinary it all was.

We were at the kitchen counter that night for the extended tasting menu. Ms. Murphy pretended not to watch us eat that final dessert. But Mr. Kriss – Mr. Drive and Ambition and Intensity – did not have the same poker face. He was standing on the other side of the kitchen just then, talking quietly with Ms. Bradley, looking out over their crowded dining room, and I could have sworn I saw a look of satisfaction flit across his face.

Review
See the food, the room and the chef of four-star restaurant Alo
October 2, 2015
Raca Café and Bar: A talented Toronto chef who deserves better
September 25, 2015 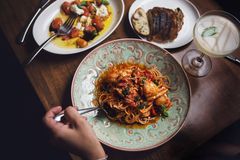 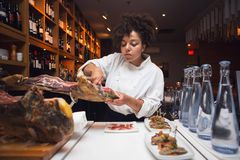 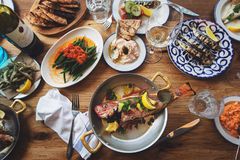