Name
La Cascina Ristorante
Location
1552 Avenue Road, Toronto, Ontario
Phone
416-590-7819
Website
lacascina.ca
Price
Antipasti, $15 to $28; Pastas, $15 to $30; Meats and fish, $16 to $40. All dishes are for two.
Cuisine
Italian
Drinks
A well-chosen list of regional Italian wines, with a few sub-$50 bottles, but the best at $60 and up.
Atmosphere
A simple, comfortable uptown room with caring service.
Additional Info
Best bets: Go for a full-meal deal: the 12-taste antipasti, pasta (get the carbonara if they have it), seared lamb, a side and dessert.

Luca Del Rosso, the Italian-born chef at La Cascina, a homey and hopelessly unfashionable Abruzzese spot at Avenue Road and Lawrence Avenue West, clearly did not learn a few of the most important tenets of North American restaurant cooking when he immigrated here six years ago.

He did not learn, for instance, that flake tuna is served only in tuna casseroles and tuna sandwiches and in self-hating little cafeteria salads that are made with gummy fusilli and blizzards of diced red pepper. He did not learn that undercooked vegetables are vastly preferred here to long-cooked ones, that crispy always beats mushy. He did not learn that restaurant food should only rarely be brown or lukewarm.

He didn't learn that dessert must be fancy or gooey or better still, fancy and gooey. Mr. Del Rosso even serves scrambled eggs at dinnertime – a thing that is just not done outside chop suey parlours and restaurants called Denny's.

But I have no quarrel with any of it, because although Mr. Del Rosso is the chef at a very good restaurant, he does not make restaurant food. He makes home food – Mom-style farmhouse cooking from the seaside mountains of Abruzzo.

The last time I ate at La Cascina, Mr. Del Rosso tossed that flake tuna with sweet, crisp discs of thinly sliced carrot – nearly the only lightly cooked vegetable I encountered at the restaurant – and olive oil that he'd infused with hauntingly floral wild lemon juice, from fruit that one of his paesani brings in from Italy. On another night he cooked shredded zucchini into a greenish, brownish, super-concentrated pap with saffron threads, olive oil and fat, richly pink hunks of rainbow trout flesh – a dish so strange and so flavourful that my date and I couldn't stop marvelling at it even 72 hours later.

Mr. Del Rosso pairs soft stewed eggplant with monkfish, with hunks of green beans that taste as much like nuts as of vegetable (long-cooking brings that out in them) and with cherry tomatoes that he cooks down to maximum sweet juiciness.

He serves potatoes boiled and cubed, soaked in more of that sunny-tasting, wild-lemon olive oil, with toasted walnuts scattered over. This, like so much else here, is an extraordinary combination.

As for those scrambled eggs, they arrive in a little brown clay dish, cooked for what any classically trained chef would consider far too long, with oil and black truffle bits so that the egg curd's turned firm and brownish. The eggs come mixed up with dun-red beans that the chef has simmered well past the usual creamy firmness. It looks like prison food. It tastes like a dream.

And all of those dishes were mere antipasti, from La Cascina's extraordinary 12-taste spread – an array of cheeses, meats, olives and of six little vegetable-based dishes that changes almost nightly. Mangia! There are still pasta and carne, insalate and dolce courses to come, and those are pretty amazing, too.

Mr. Del Rosso, who is 40, grew up in Lettomanoppello, a hill town a couple of hours east of Rome. He learned to cook from his grandmother, largely. Twelve years ago he opened a farmhouse restaurant near his hometown. But his mother met a man from Mississauga. Soon after she came here, Luca followed.

Mr. Del Rosso and his wife, Sharifa Jordan, opened La Cascina in spring of 2010, with Luca in the kitchen, and Ms. Jordan, an energetic and immensely personable force, running the front of house. (She was Tim Hortons co-founder Ron Joyce's personal assistant before La Cascina.)

The restaurant had its loyal regulars, but a lot of the neighbourhood didn't get it. The room was plain, with simple (read: cheap-looking) chandeliers, and acoustic tiles on the ceiling – this, directly across the street from a Pusateri's. People came in expecting fettucine alfredo and pretty-looking dishes. "We've had to do a lot of educating," Ms. Jordan said.

I had never heard of La Cascina until Ms. Jordan began bombarding me with messages on Twitter this summer. I decided to give the place a shot.

On a Wednesday night early this month, Mr. Del Rosso was doing pasta carbonara. He usually makes four pastas each day, two red, two white, plus two meats, fish on Thursday, Friday and Saturday, a couple contorni and one or two desserts. They're served family style – a plate of meat or pasta is generally good for two.

His carbonara came in a creamy tangle on a broad white platter, the noodles thick, square-cut, freshly made chittara, the sauce nothing more than egg, two kinds of cheese and nubs of cured pork. My date that night has spent a good deal of time in Rome. (There was a guy there, apparently.) The pasta was decadently chewy and creamy and cheesy, but balanced, too, and set off with an aggressive hit of black pepper. It was an extraordinarily good carbonara – the best I've had this side of Italy. You could see my date losing herself as she ate.

Mr. Del Rosso does thin cutlets of superb, milk-fed Ontario lamb, seared quickly with rosemary, salt and a touch of garlic in a wicked-hot pan, and set on a platter, nothing more than that. This, too, is a powerfully transportive platter. Another date, on another night, exclaimed after tasting that lamb, "This is the most Italian Italian food I've had in Toronto."

The chef's spinach contorno is just great spinach, wilted, with oil and salt and a skiff of that pecorino. His salad is a Mom salad: green-and-red leaf lettuce, salt, good oil, good wine vinegar; it is refreshingly refreshing.

I was less keen on Mr. Del Rosso's breaded, thin-cut veal one night. It was cooked the way meat is often cooked in Italy: much, much too much. Another evening's superb orechiette pasta, tossed with oil, favas and homemade pork sausage, would have been more appealing if the favas, brought in dry from Italy, hadn't been cooked to grey.

There is usually tiramisu for dessert, made without the liquor. I'm not sure what Mr. Del Rosso has against liquor, but it is nonetheless a good dessert. There are fudgey cookies, too – just a little something sweet, as my Italian uncle might say after dinner.

The last time I ate there, Ms. Jordan brought those cookies out with two little glasses of Amaro d'Abruzzo – herbal, gently bitter liqueur. She'd shaken the bitters to a froth with ice. Delicious.

"People in Canada don't really do this," she said. "I don't know why." 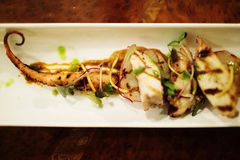 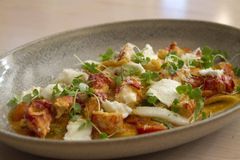 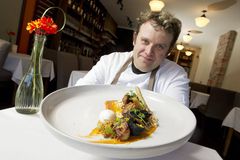