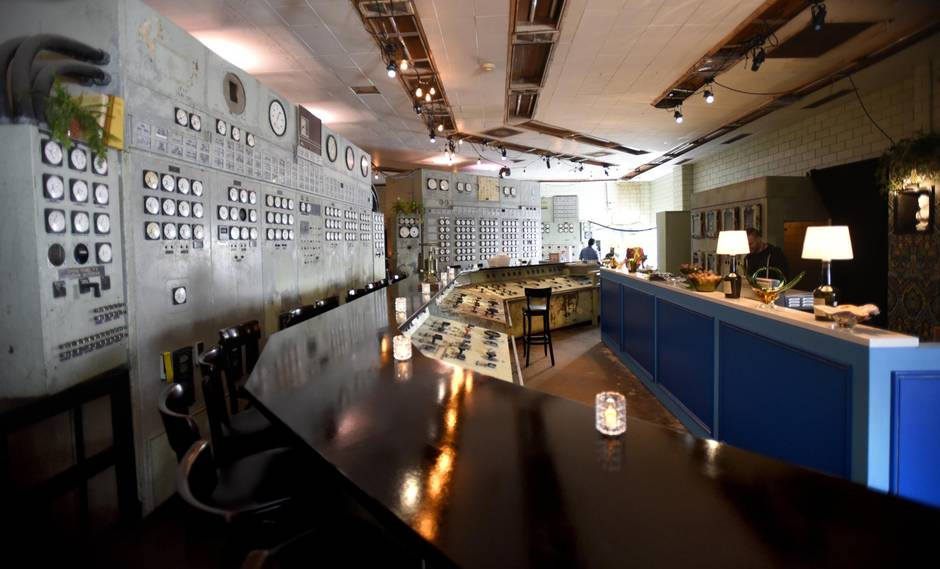 The old control room at the mothballed Hearn Generating Station has been turned into a post-industrial bar and restaurant. (Fred Lum/The Globe and Mail)

Frédéric Morin and John Bil were just three days from opening an opulent, 1950s-style French restaurant on Toronto’s east side, but they nonetheless had to skirt mud puddles last Tuesday as they approached the space. The restaurant’s grounds were a mess, the water service had been connected, via a 200 metre pipe, only a few days earlier, and the electricity – a must, you might think, in the lead-up to a high-profile fine dining launch – had come online just a few weeks prior.

Mr. Morin, a chef and partner at Montreal’s iconic Joe Beef, and Mr. Bil, the celebrated shellfish specialist and restaurateur behind Honest Weight, in the Junction, both wore blaze-yellow construction vests and steel-toed boots as they scaled a scaffold staircase to their dining room. Not long after we arrived, a loudspeaker positioned directly above where they planned to put the restaurant’s cheese station roared with a long, deafening blast that sounded like an onrushing flash flood. “That’s to scare the raccoons away,” Mr. Bil said.

The restaurant, a two-week pop-up for the Luminato Festival, called Le Pavillon, opens this weekend. If all goes well, it will be a Champagne, truffle, white asparagus and cheese-fuelled culinary time machine, and on the strength of Le Pavillon’s shoot-for-la-lune menus alone, one of the most ambitious – not to mention wildly entertaining – new Toronto launches of the past 10 years. 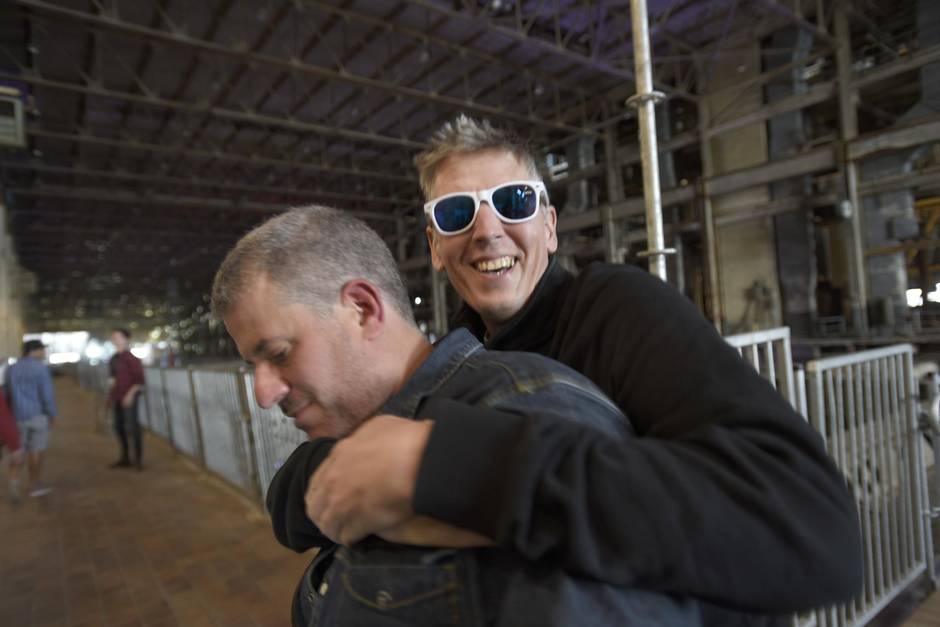 Yet, Le Pavillon’s surreal, strangely magical setting could upstage almost any menu. The restaurant is housed in the control room of the old Hearn Generating Station, amid dusty arrays of cracked Dr. Strangelove dials, fire-red emergency shut-off buttons and frozen gauges – in the nerve centre of a former coal- and gas-fired power plant so massive and so majestically decrepit that some days the fog from Lake Ontario blows through. And so Mr. Bil and Mr. Morin, who are long-time friends, have had to get creative.

Everywhere, the pair have placed distinctly old-school Gallic touches: table lamps fashioned from Calvados bottles, a solid brass duck press, and even a plaster bust of Marianne, the French national heroine. Mr. Morin made many of the decorative pieces, including those lamps, and a spectacular cheese tray, himself, in his wood shop at home in Montreal.

Other bits of decor are far more functional. In a stairwell to the space’s east, Mr. Bil set an antique floor-standing candelabra to lend a warm, hospitable glow to the industrial space. Its other purpose: to help prevent over-refreshed diners from blundering down those stairs, which a site manager warned weren’t safe for human traffic.

“There’s no template for this sort of opening,” Mr. Bil said.

Mr. Morin put it more philosophically. “It is a little bit like a courtship where you throw flowers at the window of the one you like,” he said. “If it’s successful and she or he likes you, it’s romantic. But if it’s not, it’s creepy.” 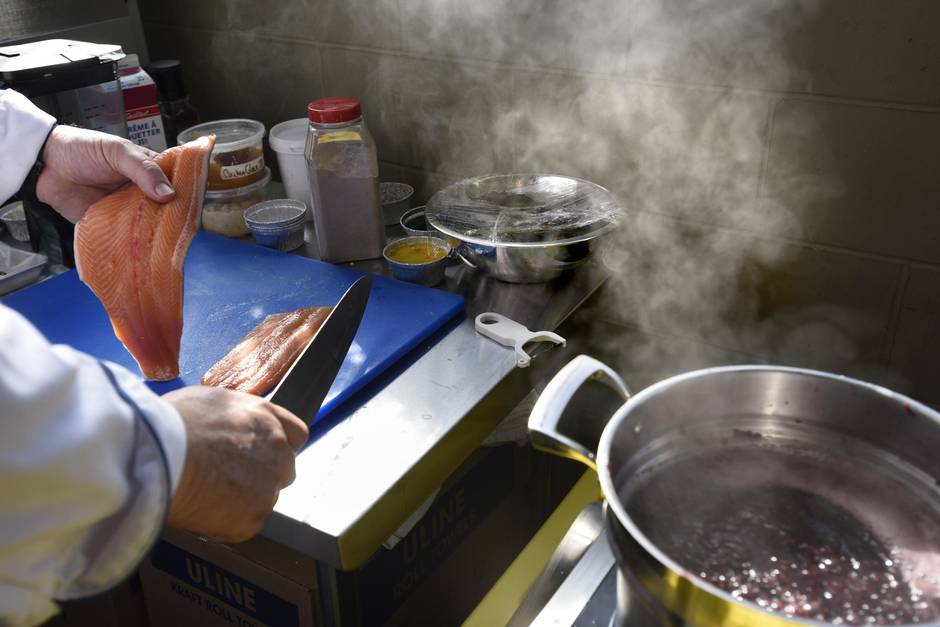 While a sauce reduces in a pot, a chef prepares trout fillets on June 9 2016. (Fred Lum/The Globe and Mail)

They had been working each day from 6:30 a.m. into the early morning hours to boost Le Pavillon’s odds of success.

The project was commissioned last fall, when Jorn Weisbrodt, Luminato’s director, called Mr. Morin to ask if he could open a restaurant for the festival. They had worked together a few years ago on another art-meets-food project, set in a model railway dining car. Mr. Weisbrodt was impressed by the theatricality and imagination Mr. Morin brought.

This time, the chef had a different idea – a dream that he and Mr. Bil had harboured for several years, and which was inspired by a late-night viewing of The French Connection, the 1970s New York crime film. In one of the movie’s most memorable scenes, a pair of heroin smugglers eat and drink lavishly in a fine French restaurant as the cop who is tailing them stands outside in the cold, slurping takeout coffee from a paper cup. Ever since seeing it, they wanted to build a restaurant like the one in that movie, they said. (The name, Le Pavillon, is taken from one of the most important New York French spots of all time, which opened in 1941.)

Also, the contrast between cold and warmth struck Mr. Morin as apropos: where the Hearn’s cavernous, concrete and steel main space was chilly and damp, and at the time, inhospitable (it has since been made over, and spectacularly, for the festival), he figured that he and Mr. Bil could turn its comparatively compact control room into a lushly warm and convivial space.

And the cooking wouldn’t be much of a stretch for Mr. Morin, who is an inveterate classicist, as well as a history geek. “I don’t know any way to start anything other than to take shallots, butter, then it could be ham, could be bacon, could be red wine, white wine. That’s the way to go, you know?” he said. 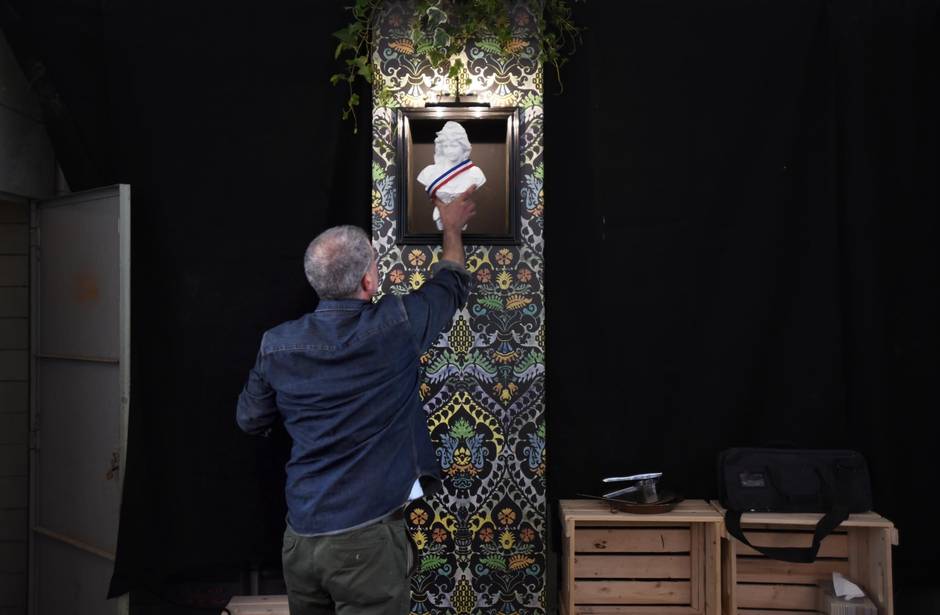 Chef Frederic Morin places a bust of Marianne (a national symbol of the French Republic) at Le Pavillion on June 9 2016. (Fred Lum/The Globe and Mail)

For Le Pavillon’s $100, seven-course menus, all 700 of which sold out soon after being offered online last month, Mr. Morin plans to serve the likes of poulet en vessie (that’s chicken poached with truffles inside a pig bladder), pastry-wrapped terrines sauced with red wine and escargots, white asparagus with Époisses cheese, and the Breton lobster specialty called homard à l’armoricaine, among many other throwbacks. Mr. Bil will shuck live scallops, clams and oysters, and serve caviar from a raw bar built into the room, he said. (Walk-ins will be able to order from an evolving à la carte menu, they said, and will be seated first come, first serve.)

Much of the operation will run on goodwill – on help from Mr. Morin and Mr. Bil’s friends in the Montreal, Toronto and New York restaurant industries, who have pitched in to make complex charcuterie, pastry and chocolates, as well as to loan production space and equipment. Dozens of others, including Daniel Boulud, Emma Cardarelli of Montreal’s Nora Gray, Joe Beef’s David McMillan, the star sommelier Vanya Filipovic, the winemaker Norman Hardie and Riad Nasr, a high-flying New York chef (and friend of Mr. Morin’s), have volunteered to stop in to bus tables, shuck oysters, slice meats, greet dinner guests and work Le Pavillon’s line. “There’s going to be all sorts of surprises,” Mr. Bil said.

Mr. Hardie, the winemaker, bottled a special blend for the restaurant, meanwhile. “We’re the first-ever two-week pop-up to have its own Norm Hardie bottling,” Mr. Bil said. The rest of the wine list will lean to the likes of grower Champagnes and cru Burgundies, as well as a few far less common aperitifs.

And thanks to Mr. Weisbrodt, Le Pavillon’s French playlists will come from the musicians Martha Wainwright and her brother Rufus, who also happens to be the festival director’s husband. “Everywhere you look there’s a favour,” Mr. Bil said, glancing around the room.

“It’s two guys busting their ass and convincing all their friends to bust their ass, and nobody asks why,” he said another time. “Not one single person asked why. And that’s a miracle.” 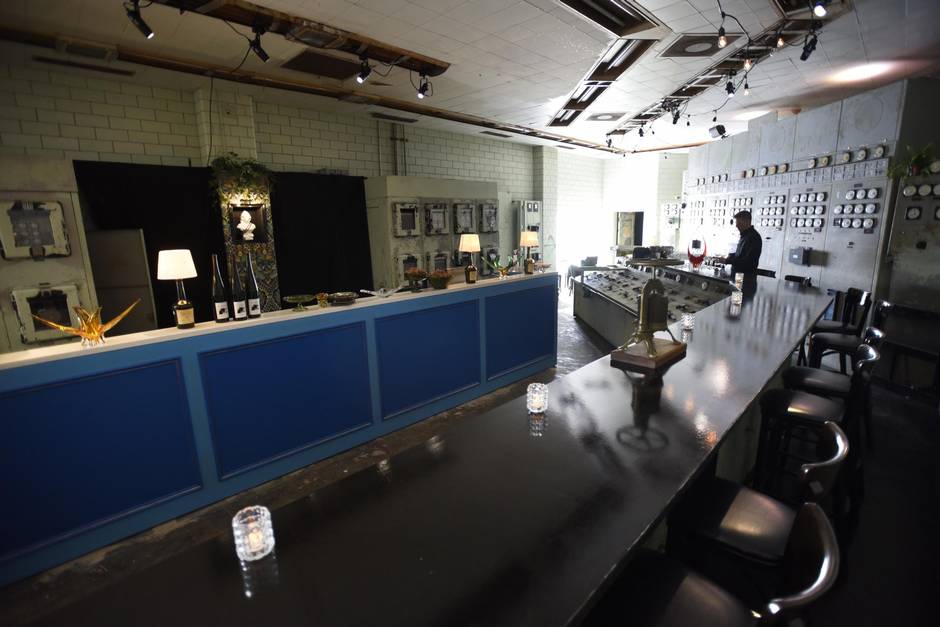 Interiors of Le Pavillion, set up in a former control room at the old Hearn Generating Station, on June 9 2016. (Fred Lum/The Globe and Mail)

By Wednesday of last week, a day after I went to see them, Le Pavillon’s kitchen crew had scrubbed down their main kitchen and service areas, clearing away a couple of decades’ worth of postindustrial detritus and grime. Mr. Morin flew back to Montreal that morning to pick up a truckload of supplies, and then immediately turned around to drive them back to Toronto. They passed their city health inspection the same day, Mr. Bil said.

On Thursday, as Mr. Bil drove out to a farm in Simcoe to pick up 45 pounds of white asparagus, Le Pavillon’s kitchen team began testing dishes for service the following night.

“This food doesn’t just have to be in books,” Mr. Morin had said earlier, when asked why they were opening this restaurant in such a difficult spot, for just two weeks. Old art usually lives on in museums and music on records, but for old dishes and styles of cooking to survive, people have to continue making and eating them. “The food can still be done and be pleasant without it being dinner theatre,” he added. “If people drink and eat and this takes a life of its own and it’s not cerebral and contemplative, then it was a success.”

“We’re just doing this because it’s how we’re hardwired,” Mr. Bil said. “But I want it to be something that people are never going to forget.”

Open Tuesday to Friday, 5 p.m. to 11 p.m.; weekends, noon to 11 p.m. Closed Mondays. There will be limited space for walk-ins. At the Hearn Generating Station, 440 Unwin Ave.