The waitress at Maxim's Restaurant raises her eyebrows. We are already picking at a massive plate of fried rice with diced Chinese duck, sausage and bacon. Now we would like to try black pepper beef and Portuguese curry chicken.

"Maybe you would like …" she points to the lunch special.

Yes, it's a good deal – only $9.95 for a set meal that includes a dinner roll, cream of broccoli soup, fried spaghetti or pork and gravy, plus coffee or tea. But it is the pepper beef and curry chicken that we came for.

The waitress walks away, shaking her head. We are obviously not regulars here and are ordering all the wrong dishes.

Maxim's is a classic Hong Kong-style café in Vancouver's old Chinatown. It's been here forever, or at least since before the advent of cellphones: In the entrance, there is one of those universal no-thank-you signs with the image of an old rotary handset in a red circle slashed with a diagonal line.

A total blast from the past, Maxim's is clean and bright, with retro-diner booth-bench seating, laminated menus under glass-topped tables and servers dressed in matching bowties who accept only cash. The customers are mostly elderly Chinese couples, all eating the set lunch.

In Hong Kong, these Western-style cafés became popular after the Second World War, an affordable alternative to the exclusively British fine-dining enclaves. They proliferated across Vancouver in the late eighties and early nineties, sustaining the new influx of Hong Kong immigrants with familiar comfort foods – greasy-spoon fare, tweaked for Chinese palates and served without the slightest trace of irony.

Portuguese chicken is a big, bubbling casserole softly crusted with browned cheddar– and probably better suited for a family-style dinner. Thick and creamy, the dirty-dishwater-hued coconut curry is seasoned with an oddly pleasant medley of bay leaf, soy sauce and paprika.

We spoon it onto rice in gooey chunks, then dive into the pepper beef, which arrives on a sizzling skillet with crunchy egg noodles underneath and chopped iceberg lettuce over top. The thinly sliced beef has been stir-fried in a cornstarch-thickened slurry that's more sweet than piquant. I'd wager that the sauce is made with rice wine, oyster sauce, Worcestershire and perhaps ketchup.

There is nothing remotely refined about this food. It tastes like something Betty Crocker might have whipped up if she had gone to China with Richard Nixon. Yet, it's curiously addictive – and likely loaded with MSG.

A couple at the next table stares disapprovingly as we stuff ourselves silly. The waitress was right. The two of us have ordered enough to feed six.

"Too much!" the old woman in sunglasses leans over and says with a friendly frown. As newbie customers, we are fish out of water, flapping around awkwardly in this vinyl-upholstered time capsule, ordering whatever feels right and paying no heed to tradition.

But in a strangely symbolic way, our hapless lunch experience is a mirror image of the mass disruption currently shaking up an increasingly gentrified, hollowed-out Chinatown.

This historic community, built on tall, narrow lots behind closed gates, is one of the oldest and largest Chinatowns in North America. Yet, for decades – as immigrants from Hong Kong, Taiwan and Mainland China moved to the suburbs – it has suffered a long, slow decline. It is primarily pensioners that live here these days, mostly in dilapidated single-room housing.

Tourists still think that this is the place to go for the best Chinese food in Vancouver. They're wrong. If it weren't for New Town Bakery, along with a few herbalist and barbecue shops, there wouldn't be any reason for the Chinese diaspora to come here at all.

Jade Dynasty closed last year. Daisy Garden burned down. Foo's Ho Ho and Garden Villa are in the slow stages of reinvention. Floata is the only dim-sum restaurant still standing. Besides the perennially popular Cambodian Phnom Penh, the only vestiges of the old school are a handful of Hong Kong cafés – the Boss, Goldstone, New Mitzie's and Maxim's.

In their place, Chinatown has been filling up with condominium towers anchored by hipster cafés, cocktail bars, skateboard shops, multinational ramen-yas and a handful of nouveau-Asian restaurants geared to a younger generation.

Some, like Bao Bei, have been successful by offering authentic Chinese dishes made with elevated ingredients and modern service – cocktails, small plates, dim lighting and chic decor.

Others have had to adapt. Take Fat Mao. The casual noodle shop opened with a mixed menu of pan-Asian soups. But pricey Chinese noodles in Chinatown were a hard sell. The new menu is predominantly Thai.

Then there is Sai Woo, still struggling for an identity more than a year after launching. I've tried to review this restaurant several times, but the concept keeps changing.

The restaurant is owned by Salli Pateman, the Yaletown trailblazer who opened Section (3), previously DeNiro's Supper Club, before the developers moved in and the district was still dark with warehouses. After 18 years, she sold Section (3) and moved on to the next edgy, up-and-coming neighbourhood, Chinatown.

Named after the Sai Woo Chop Suey restaurant, circa 1920s, the large heritage building has been beautifully renovated. Pateman and her designers stripped back layers of history to reveal high ceilings, skylights, brick walls and the original Douglas-fir flooring. Decorated with Persian ironwood trees and dramatic button-shaped chandeliers, it looks, well, like a fancy Yaletown restaurant.

Mr. Chan's fusion fare was well received, but too high-end for the neighbourhood, Ms. Pateman explains. When he left, the chefs who took over were struggling with his menu. When I went in January, they couldn't muster up a simple plate of wok-fried gai lan. It was limp and greasy.

Today, the restaurant offers a little bit of everything. There is a new downstairs lounge for late-night cocktails, private functions and a monthly speaker series. In addition to dinner, there is a dim-sum happy-hour menu, a Sunday-brunch menu and a late-night lounge menu.

The cooking has vastly improved, but it's a still a grab bag – snacks, skewers, noodles and large plates that run the gamut from hanger steak to lemongrass chicken. They've thrown everything at the wall, but it's still not sticking.

Next week, the menu is doubling to 40 dishes. Tapas? The owner says yes, the chef says no. We can only guess what Sai Woo will look like when it finally finds its groove. I guess I'll wait another year before I give it a proper review.

For now, Sai Woo is flapping around awkwardly like a fish out of water. Kind of like us at Maxim's.

After stuffing ourselves at lunch, we still have room for milk tea and a pineapple bun. The waitress nods approvingly. These two items are a traditional match. Her eyes widen when we ask for the pineapple bun with a slice of butter. That is how it is supposed to be ordered. We have finally earned her respect by simply sticking to the basics.

An earlier version of this story named Douglas Chan as Sai Woo's opening chef. It was in fact Douglas Chang.

Review
At Mr. Red Café’s new Kitsilano location, each dish has a story
May 6, 2016 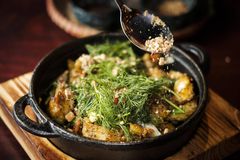 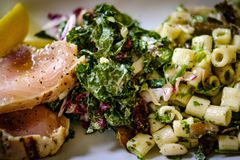 Review
Maumi Ozaki keeps the fish coming, so long as you dine by his rules
April 22, 2016 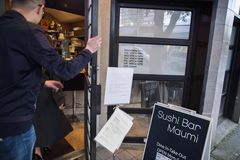