When clearing the remains of our oven-blistered flatbread, the server at Nightingale accidentally dropped an oil-brushed slice on the wood floor. Uh-oh. She paused and looked down, not sure whether to bend over and retrieve the bread or leave it. After a moment's hesitation (the space was fairly tight), she swiftly kicked the pesky piece under the table, where it landed about an inch away from my toe. Own goal score! The flatbread punt wasn't a red-card offence in and of itself. The service, on this occasion and two others, was generally pleasant, prompt and knowledgeable. Yet, this one little slapdash fumble does neatly encapsulate the larger inconsistencies, laziness and lack of ingenuity plaguing Vancouver's fabled new songbird.

David Hawksworth is widely regarded as one of Canada's greatest chefs. His flagship restaurant, Hawksworth, ranked third in the awards for Canada's 100 Best Restaurants 2016 (down from second in 2015) and has consistently been named best upscale restaurant by the Vancouver Magazine Restaurant Awards since it opened in 2011. Mr. Hawksworth represents Canada in the international skies (his signature dishes are featured on Air Canada's business-class flights), he's a television celebrity and he founded the country's most serious national competition for rising chefs, The Hawksworth Young Chef Scholarship Foundation.

Local diners should rightfully expect great culinary leadership from our most valuable player and hold him to a higher standard.

Nightingale, Mr. Hawksworth's third restaurant (he also owns Bel Café), is certainly fit for a king – or perhaps a young heir to the throne biding his time in a modern country manor. Housed behind the fetching heritage façade of a rare brownstone in the new MNP Tower, the 7,400-foot interior opens up into a soaring double-height lounge and long-stretching mezzanine appointed in pearly marble, light wood, brushed copper, hunter-green leather, and birds – flocks and flocks of opalescent origami birds hung in gilded frames. Ornithophobes, beware.

And how did Mr. Hawksworth choose to fill his castle? With a knockoff from Los Angeles.

The casual menu concept, comprised of raw (salads, crudo, charcuterie), seasonal vegetables, pizza, small and large shared plates, is fairly simple and straightforward. But this is also the exact same way – right down to the printed layout – that a few trendsetting L.A. restaurants, including Gjelina and Bestia, have composed their menus.

Mr. Hawksworth doesn't deny that he was inspired by his visits to California. "For sure, absolutely, 100 per cent," he said by phone. "That's the kind of food I like to eat. I really thought there was a need for something like this in Vancouver."

It's hard to argue with that. Everyone wants to eat lighter these days. Everyone loves thin-crust pizza. And Vancouver, for whatever odd reason, has long lagged behind the rest of North America in putting vegetables at the centre of the plate. (Even meat-loving Montreal does a much better job at cruciferous creativity than we do.)

Nightingale does toss excellent pizza. The 48-hour fermented dough, made with a mix of powder-like "00" Italian flour and coarser half-whole-wheat "1" turns out a singular crust that is both crisp and firm (no flopping in the hands), yet soft and pliant (no scratching of gums).

But given Mr. Hawksworth's pedigree, one might expect him to take the vegetable-forward concept and make it his own. One doesn't expect to see the exact same dishes, save for a few minor garnish tweaks, served at Gjelina (and now proliferated around the world through the Venice Beach restaurant's bestselling cookbook).

What's worse is that at Nightingale, many of these fresh, seasonal dishes don't even taste like their main ingredient.

Roasted maitake mushrooms, crisply frilly on the edges and bulbously meaty in the middle, are saturated with so much brown butter they drip like sopping wet sponges when squeezed. Charred carrots taste like cilantro, cumin, shaved almonds, chili vinaigrette, lime yogurt and everything else piled on – except carrots.

Last month, a beautiful, ripe peach was peeled and charred for a daily dessert, then pulled out of the fridge mere minutes before being served so that the juices were tightened into a bland, flavourless chill.

As a one-time judge for Mr. Hawksworth's scholarship, I've seen him berate young competitors for lesser crimes against food. (A panna cotta with insufficient jiggle scratched one contestant's chances.) Which only makes the amateur missteps that piled up over three visits to Nightingale all the more shocking.

Braised octopus was chewy and charred, bracingly acidic and chopped into bite-size tendrils one week; the next week, it was bloated and turgid, slicked in oily butter and completely missing all the blistered capers, parsley and vinegar as advertised.

Braised rabbit pasta with rapini and white wine, which sounded light and summery, was dry (both from the overcooked meat and top layer of browned breadcrumbs) and overwhelmed by a pungent preserved-lemon cream sauce.

The "chimichurri" on an otherwise lovingly tender, perfectly grilled hanger steak, wasn't even chimichurri. It had no oregano, the main ingredient in chimichurri. Bitter and pulpy with chopped parsley stems, it wouldn't even classify as a decent salsa verde.

Do the little mistakes matter? They do if you are a culinary leader who is supposed to be teaching by example.

Does a borrowed concept make it any less worthy? Not if you're a corporate chain restaurant, I suppose.

Is it too much to expect something more original, finessed and soulful from one of Canada's greatest chefs?

Nightingale is a beautiful restaurant and Mr. Hawksworth is a very successful restaurateur. But if this is the best he can do as the executive chef and owner of a rapidly growing empire, then the emperor wears no clothes. And this is a truth that can no longer be swept under the carpet – or kicked beneath the table.

Vij’s Patio is casual yet excellent. If only its namesake was around too
July 22, 2016
Review
Unfamiliar flavours feel like home at Vancouver’s Saray Turkish Cuisine
July 15, 2016 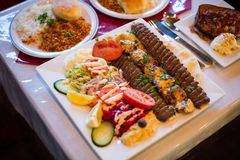 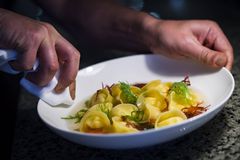