Okay, no seriously. This isn't just any food. This is food from the Great White North.

You can tell this is the kind of pub that celebrates Mounties and maple syrup as soon as you walk in the door, 'cause the servers are all wearing plaid shirts and Muskoka dinner jackets. There's a stuffed Canadian goose in the window – his name's Terry. And the seats are covered in old Canada Post mailbags.

Timber used to be an art gallery. Guess all the skylights and sunshine – it's kind of like an atrium, eh – were a bad idea for the paintings and sculptures. Before that, it was part of O'Doul's Restaurant and Bar. Remember the place with the live jazz? Yeah, betcha got loaded there a few times.

That was a few years back. When O'Doul's closed down, they carved the place in two and turned the other half into Forage. You know, the restaurant that's, like, really into sustainability.

Chris Whittaker is the executive chef of both restaurants. Man, that dude's not just a tree hugger. He's a true hoser! He says the food at Timber is the kind he likes to eat when he's not working. Wow, he must get the midnight munchies a lot 'cause the menu is packed with things like maple-glazed wings, dry ribs, mac & cheese, bison burgers and Montreal smoked meat sandwiches.

One day, we went in and were being all fancy and talking about counting calories and eating gluten-free.

"Whoa, you're in the wrong place," the server joked. D'oh!

We were there for happy hour because even though it's hoser food, it's pretty expensive, eh. But during happy hour, from 3 to 6 p.m., the snacks are half price.

The snacks are awfully plain to look at. I mean, the pepperoni stick is just one long, skinny stick on a plate. No paper wrapper or anything. The server said it tastes just like the kind you get at a gas station. Yeah, that's what she said. But to be honest, I don't think she's dined at Petro-Canada for a while because this pepperoni stick was way better – real spicy and not so greasy.

The smoked pickled egg was served in a little glass cowboy boot. Mind you, it didn't taste smoked, or pickled. It tasted like a plain hard-boiled egg, the kind they serve at the Legion. But who doesn't enjoy a boiled egg? Especially when you're drinking beer.

Timber serves a lot of beer. The good craft kind that comes in flights of four glasses. And Caesars, too. They got lots of Caesars, all mixed with made-in-Canada Walter clamato juice. We liked the Pickleback with whisky, pickle juice and sriracha.

So back to the snacks. The deep-fried cheese curds were pretty good, but mega salty and kind of sweet, too. The only problem is that they'll give you doughnut breath because they're fried in the same batter as the Timber Bits on the dessert menu.

If you're going to order dessert, you have to check out the brown-butter tart. It's gargantuan, and it comes with a big, boozy scoop of rye ice cream. Never seen anything like that at the bake sales.

Some of the snacks are kind of odd. Like, who would order baked beans or potato salad, just for a snack? Sure, that's what you eat cold, right out of the fridge, when you come home wasted after the bar. But when you're at a bar? Weird.

Like I said, there is a lot of meat on the menu. The best dish is the Wild Boar'd for two people. It comes with smoked sausages, crumbly pate (they call it cretons in Quebec) and boar bacon topped with kimchi. That's the multicultural touch, eh. But the very best part is the tomahawk pork chop. It's a beauty. It's like a huge slab of back bacon on a bone. They don't even slice it or anything. Guess you're just supposed to pick it up with your hands and gnaw it like a caveman. Total hoser food!

Even the "Not Meat" menu is pretty meaty. There's only one green salad (well, two, if you count the chopped steak salad). But the kale salad is all covered in berries and hazelnuts and brie cheese. It's really tasty, but kind of rich, like a dessert.

The shroom poutine is also good. They import real squeaky cheese curds from Quebec. But the gravy isn't like French gravy. It's creamy.

The perogies are totally bitchen. This is classic hangover food – starchy, stuffed with goat cheese and smothered in fried onions. You can get brisket on the side. It's really fatty and smoky with a nice red ring. But you can't get salad, even though it's, like, supposed to be a vegetarian dish.

So, that's the end of the story. Happy Canada Day to all you hosers out there. Take off, eh! 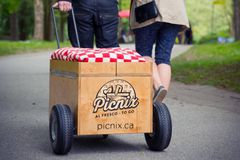 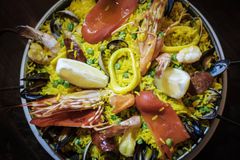