It's a chilly summer night in Vancouver. (What else is new?) So you wrap yourself in the cozy burnt-orange blanket kindly tossed over the back of your chair at the new Vij's Patio.

And what a lovely patio it is, perched on the rooftop of the new Vij's Restaurant, with its peekaboo pink-grill fencing that offers expansive views of the North Shore Mountains. The walls are covered in pale-blue, patterned tiles, the wooden benches are scattered with stuffed rice bags for pillows, and strings of patio lanterns twinkle overhead.

In photos: The food at Vij's Patio

Someday, when the tendrils of young grape vines climb up the trellises and fill in the corners, it will feel lush and tropical up here. But tonight it feels a little bit bare, a little too quiet.

Where is the music? There is no music playing, or else it is playing so low we can't hear it. Uh, oh.

"Somebody's going to be in trouble," co-owner Vikram Vij later says by phone. "That's one of my pet peeves. When I'm there, I'm always telling my staff to monitor the music."

But the busy, self-proclaimed workaholic isn't here tonight because it's Sunday, the one day a week he takes off to be with his two daughters and former spouse, executive chef and co-owner Meeru Dhalwala.

The other days of the week begin at 8 a.m., when he goes to the factory in Surrey, B.C., where Vij's packaged frozen foods are prepared and his growing empire is run. In the evenings, when he's not off doing a cooking event, making a speech or auditioning for Master Chef India, he rotates among his three restaurants, Vij's, Rangoli and My Shanti. (The first two are owned with Ms. Dhalwala, the latter is his own.)

Mr. Vij usually makes an appearance at some point during the night and lights up the room with his funny banter and irreplaceable charm. But what with all those obligations, it's easy to miss him. This is our fourth visit to the newly relocated Cambie Street restaurant and we haven't seen him once.

Is he perhaps spread too thin?

Ms. Dhalwala says that, although she is always pushing her ex-husband to find more balance in his life, his punishing schedule isn't her primary worry. "I remember worrying 15 years ago that he was always there," she says in a separate interview by phone. "I told him 'You don't want Vij's to be dependent on you being there. Eventually, you're going to get old and arthritic.'"

So now he's not here, and it's probably a good thing for him and their businesses, but it just doesn't feel the same. The servers are extremely knowledgeable and efficient, although somewhat aloof. The bartender can help you navigate the extensive wine list, but you can't sidle up beside him. As with the new lounge downstairs, Mr. Vij insists that there be no stools by the bar.

"The kitchen and the bar is where the creativity is happening," he later explains. "You have to let the bartenders, and the cooks, do their jobs."

The food, which Mr. Vij actually has very little to do with, is excellent, as always, despite the kitchen's limitations. For now, the patio permit does not allow on-site cooking. The rooftop menu is prepared in the downstairs restaurant, heated up at 4 p.m., and kept hot behind the rooftop bar in warming dishes.

The food has to maintain its integrity throughout the evening so the menu is more casual and entirely different from downstairs. That means no lamb popsicles. Don't even bother asking.

Instead, order the insanely delicious short-rib papri. It's a refined version of chaat (the nachos of India), served on thin wheat crisps with fat dollops of sour cream melting into the thickly, slow-stewed dark curry warmly scented with cinnamon, cumin, red wine and a ton of golden onions.

Or try the curried chicken liver pate, thickened with ground kale (of all things), to give it a meaty texture without becoming overwhelmingly rich.

There are also several rice bowls to choose from. The paneer and kale with Bengali curry is heavy with a hot regional spice mix – kalonji seed, mustard seed, funugreek seed, cumin seed and fennel seed. The chicken in tomato and cilantro is a lighter, Punjabi-style curry, scented with cinnamon and cloves.

The latter is perfect companion to the refreshing Patio Lantern, one of several new Tiki-style cocktails designed for the rooftop. This is one mixed with Vij's Bolly Water – yet another new business venture – a craft gin, which is subtly infused with chamomile, fennel and cardamom. It's served in a beautiful silver bowl filled with lots of ice.

If Mr. Vij were here, he would scoff at the plastic straw and tell you to put your lips to the bowl. He'd laugh and say something outrageous, as he later does phone.

Then he would tell you that he imported the silver drinking bowls from India because they remind him of his grandfather.

"He always drank his scotch out of one of those bowls," he says. "I never realized it was scotch that he was drinking. When I asked, he always said: 'I'm drinking my medicine.'"

It would be a lovely anecdote to end a perfect night on a beautiful patio. But he's not here. So you take your last sip from the straw, wipe the curry stains off your fingers, crumple your napkin and make your way home – satisfied, but not completely. It shouldn't really bother you, yet it does all the same. And he should take that as a compliment. 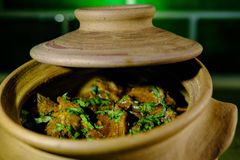 The Food 53: Celebrating the most influential people in Canadian food
July 19, 2016 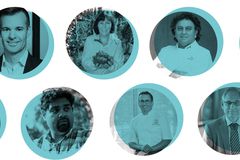