A neon-pink elephant waves its trunk in the air, heralding the new Vij's. After many delays, Vikram Vij and Meeru Dhalwala have finally moved their acclaimed restaurant to Cambie Street Village.

The exterior, clad in pink-grill panelling, seems subtle when compared to the shimmering silver sequins that cover My Shanti (Mr. Vij's solely owned venture in South Surrey). The musky perfume of burning incense teases the nostrils as we ascend the ramp to the front entrance.

What's this? No lineup? Unless you arrive before the doors open (and some people still do), the days of waiting outside in the rain are a thing of the past. The restaurant that famously made Pierre Trudeau and Harrison Ford get in line with everyone else still does not take reservations. Tonight's wait for a table is 45 minutes to an hour, as usual. But the new 40-seat lounge makes it a more civilized prelude.

The room is bookended by a semi-open kitchen and a bar. Jay Jones, the restaurant group's new beverage manager, has created an enticing cocktail menu that incorporates Indian spicing without sacrificing good taste: a boozy Side Cardamom (the cognac is steeped with green cardamom pods), the frothy yet refreshing Kashmir (a cross between a mojito and a pina colada, shaken with coconut milk, ginger-lemon syrup and mint-infused rum) and the smoky Pankot Palace (a spicy sumac-masala bloody Mary mixed with mescal).

The lounge, appointed in jewel-tone stained glass and a ceiling made from ceramic chai cups, is cozy and charming. Which only makes the bland dining room even more disappointing.

With its vast sea of plain wooden tables in a big square box and everyone's coats slung over chair backs, the room has all the ambience of a food court. Marc Bricault's understated design details – the matching swirls in the padded ceiling and carpeting – may help absorb the noise, but exude no sense of pizzazz.

As Mr. Vij later explains, an open concept was chosen to help accommodate large groups. But would it really be that hard to move something as simple as a screen when rearranging tables? A few dividers to create private nooks would make for a far more pleasant experience.

Opened in mid-December, the new Vij's is still a work in progress. There are plans for lunch service and a late-night menu. Eventually, there will be two private rooms on the second floor and a patio on the rooftop. Perhaps when the upper levels are lit up, the building will look more like the blazing lantern that the owners envision and have been talking up for years. For now, the mood burns unexpectedly dull and dim

The food is an entirely different matter. Robustly spiced, finely prepared, often whimsical and always inventive, the fiery flavours that jump off these plates are as exciting as ever.

Mr. Vij may indeed be a European-trained chef, but Ms. Dhalwala is the self-taught chef who has managed the kitchen at Vij's ever since it moved from a café to a full-service restaurant in 1996. They do collaborate on ideas, and some of the recipes are his.

Ms. Dhalwala is a long-time environmentalist who once worked in international economic development, and her sustainable-food fingerprints are all over the menu. The first item on the list, Vij's Monarch Butterfly, is a tribute to the endangered winged insect that migrates from Canada to Mexico each autumn. The silky steak-like slices of ghee-braised squash – pinned across sky-blue plates with chewy thin slivers of brown wood ear mushrooms in saffron curry (to look like a butterfly) taste a lot more appetizing than the dish sounds.

An ample vegetarian selection includes tantalizing textures and well-balanced flavours that far transcend the mushy, meatless second thoughts offered in most omnivore restaurants. Firm rounds of eggplant are served with crispy fried onions in a garlic curry made from fresh yogurt that has been strained to add extra tang. Jackfruit in black cardamom and cumin curry, as meaty as chicken, is quickly deep-fried so the fibres become tender without falling apart. Vegetable koftas in creamy tomato curry are shaped from shaved carrot, sweet potato and chickpea flour into sturdy cylinders that have the same satisfying bite as the (also excellently gamey) mutton kebabs.

With a sharing-style menu this diverse and somewhat unusual, we are at the mercy of the exceptionally well-trained staff. On a previous visit, we could not decide. The server wisely steered us away from the salad trio. (It would have been too much fibre). She also kindly suggested we order smaller, 2/3-size portions, which are not advertised.

Tonight, it is a toss up between pork tenderloin and sablefish. A different server insists we try the pork. She is right. If you are the type of Vij's customer who always orders the famous lamb popsicles, do yourself a favour and order the pork tenderloin instead.

They are similar dishes in that the tenderized pork medallions, like the lamb chops, are marinated in spices and grilled to order. And both dishes come with cream-based curries. But the pork curry gets extra richness from its pork-hock stock. Add the vibrancy of ginger, the tangy heat of cayenne oil cutting through the cream and the bright acidity of fresh-squeezed lemon to finish, and this is, hands-down, the best item on the menu. Move over, lamb popsicles. Pork is the new star.

Both dishes pair very well with a bottle of the Mike B. Riesling Cabinett, a refreshing, fruity palate-quencher that general manager Mike Bernardo made in collaboration with the Okanagan Crush Pad winery after being named sommelier of the year at the 2014 Vancouver International Wine Festival.

From its lauded fine wines and table service to French-method cooking, Vij's truly has been a trailblazing model for contemporary Asian dining in Vancouver. But, as many great restaurants do, it has grown into an empire and fractured into many pieces.

The big new dining room feels a little lonely and less intimate without Mr. Vij there to greet us and charmingly spoon the curries onto our plates. We cannot blame him for wanting to grow and needing to split his time between his various ventures. But he was always such a large presence on the floor and now he is not.

Vij's is in very capable hands. It has two loving parents who are determined to make it work. It will adjust to the new location and thrive. Sadly, however, it will never be quite the same. 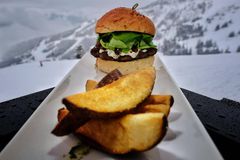 Review
Agrius by Fol Epi: Succulence of the lamb
February 12, 2016 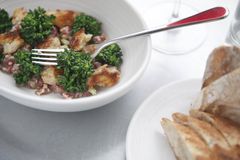 Peninsula Seafood Restaurant offers Cantonese for Vancouver’s elite
January 29, 2016
Follow Alexandra Gill on Twitter @lexxgill
Report an error Editorial code of conduct
Due to technical reasons, we have temporarily removed commenting from our articles. We hope to have this fixed soon. Thank you for your patience. If you are looking to give feedback on our new site, please send it along to feedback@globeandmail.com. If you want to write a letter to the editor, please forward to letters@globeandmail.com.
Comments