Not long ago, dinner guests would consider you a serious do-it-yourselfer if the Caprese salad you set before them had come from a tomato plant and a pot of basil you picked up from the garden centre and watered just enough to keep alive. Not any more.

These days, the national appetite for organic, artisanal and locally grown food is so great that an increasing number of city-dwellers from Vancouver to Halifax are turning their modest backyard plots into mini-farms. Growing extensive fruit and vegetable crops, raising chickens and even keeping bees for honey, they have fallen for an ultra-locavore approach that blurs the line between urban and rural living.

Take Nova Scotia native John Bignell, a paramedic by day and avid apiarist in his off-hours. With the help of his wife and their two young boys, Bignell keeps more than 20,000 bees in his Halifax backyard. "It was important to show my kids where food comes from, to have that connection to the natural world," he says. "Keagan, who is 5, knows honey doesn't come from a bottle." What's more, Bignell says, "our bees are foraging from the trees and flowers right in our neighbourhood. We don't have to worry about the pollen coming from a crop that has just been sprayed."

Concerns about health and food security were at the front of Marci Babineau's mind when she decided to set up an urban farm in her Montreal backyard. She and her family live in a turn-of– the-century Westmount semi with a small garden running around its edge – at least it was a garden before Babineau got in there and turned it into what she calls an "edible forest." Now she grows an array of tree fruits, from apples and plums to cherries, as well as hazelnuts, berries and vegetables. An experienced organic gardener, Babineau applies the tenets of permaculture to her backyard oasis, which dictate that the best way to develop a sustainable ecosystem is to take a step back from tilling the soil and, instead, to work with what you've got. "You follow nature's model," she says. "Every year, it dumps a pile of leaves on top [of her beds] as compost and you just build over that. Nature is the ultimate blueprint for how you plant. You look at the sun and see how many hours you get where; you take advantage of vertical space, train fruit limbs to grow up high or use trellises and rooftops."

Babineau also keeps hens on her city property for the eggs they provide. "The first year [2009], we were completely undercover. Keeping chickens wasn't against the law, but I didn't want to [attract attention]," she says, noting that she was then new to the neighbourhood. Today, the chickens cluck and peck out in the open. "People come to see my hens. Kids come to hold them. They've been embraced by the community."

Community is a huge part of Jessica Mudry's urban-farming experience, too. When the university professor moved into a new Toronto home last year, she and her young children acquired a big vegetable plot in the west-end house's backyard.

Less experienced in farming than most of her neighbours, Mudry happily receives help from all sides, she says. "The neighbourhood is really a leaning-over-the-fence-to-talk kind of place. One day last summer, I came home and found that someone on my street had come and staked my tomatoes. He must have seen them drooping from three houses away."

Mudry also grows Chioggia beets, red chicory, zucchini, grapes and herbs, which she and her kids enjoy along with the figs, bitter melon and collard greens that her Portuguese and Chinese neighbours grow and share with her. "When they give you their produce, there's always this proviso: 'They're not very good this year,' they'll say, even though they're beautiful."

Even if many Canadians aren't blessed with neighbours such as Mudry's, don't have the nerve to keep bees and lack the patience to train fruit trees, it's still possible to mount an ultralocal Thanksgiving feast this (or any) year. How? Among other things, shop for close-to-home ingredients, visit farmers markets and think seasonally when planning a menu. There are also the recipes on these pages, each featuring a star ingredient from the urban plots of Bignell, Babineau and Mudry, hands-on exemplars of city "farming" at its most productive. 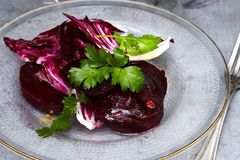 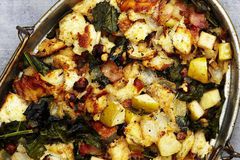 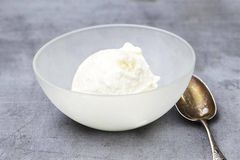