Chances are you're not going to the No. 5 Orange for the pulled pork sandwich, but if you're in the joint anyway, why not stick around and have a bite? The legendary Vancouver strip club has seen its share of celebrity clientele – actors, rock stars, hockey players – breeze through its wooden double doors, but improving on the lunch crowd was a challenge. How to get more of the regular folks in – the lawyers from the courthouse across the street, the firefighters coming off their shift? The answer was as simple, management figured, as changing the menu. Even if the main attraction isn't decent, that's no reason the food shouldn't be.

"We understand we're a strip bar in a certain area," says manager Jeremy Rossier, referring to the club's location in Vancouver's notorious Downtown Eastside. "That doesn't mean we can't have food we're proud of."

A few months ago, Rossier hired one of his regular customers, restaurateur Stuart Irving, to overhaul the menu. Irving, who used to bring his kitchen staff to the No. 5 regularly as a "team-building exercise," had closed Cobre Kitchen after the rent doubled, and was in between gigs. (He recently opened a new spot nearby – Cuchillo, featuring Latin American cuisine, and now the latest target of "anti-gentrification" Downtown Eastside protests.)

Irving's goal: bring the No. 5's offerings out of the dark ages and into line with Vancouver's culinary aesthetic – with fresh, sometimes organic ingredients. Gone are nasty frozen fries and burger patties, replaced by wild sea-prawn satay kabobs, free-range mesquite barbecue chicken wings, sea-salted skinny fries and gourmet hot dogs. Yes, you can even order a vegan version of the Southwest Chili Dog.

None of this, perhaps, is a surprise in the part of the world that gave birth to the 100-mile diet, where backyard chickens are a dime a dozen, and where the city council this year passed a food strategy calling for a "just and sustainable food system." And while Irving is not offering a locavore menu, he proudly points out that he sources bread from upscale, locally headquartered bakery chain Cobs (misspelled on the menu, incidentally) and meat from two local operations – a smokehouse down the street and a meat supplier in nearby Burnaby specializing in Italian products. This isn't the first strip club on the Pacific to offer a decidedly West Coast menu. Portland's Casa Diablo promises the "hottest dancers in Portland," but also bills itself as the world's first vegan strip club, with offerings such as beefy stroganoff, hummus veggie wraps and a soy burrito – and no fur, feathers, silk, wool or leather allowed on the stage. Publicity stunt? Maybe – there's been lots of it – but club owner Johnny "Diablo" Zukle, a vegan himself for 29 years, was serving up vegan fare before he was offering up the onstage flesh, and aims to "save as many animals as I can" by converting his customers and dancers to a vegan lifestyle.

"I'm proud that our food tastes are really good. I don't know how much of a correlation there is, but I can tell you we're the No. 1 strip club in Portland, Ore.," says Zukle. "We've got 400 or 500 people coming through on Friday and Saturday nights. You ask any cab driver where's the best club in Portland, and they'll tell you Casa Diablo." (The club's logo, by the way, is a huge-breasted, pigtailed, blond she-devil cartoon figure, about to ingest a large carrot.)

The No. 5 menu, developed out of the tiny kitchen – a converted DJ booth – is by contrast a carnivore's dream, although it includes two salads – a classic Caesar and a surprisingly satisfying green salad with organic lettuce, bean sprouts, pea shoots, tomatoes, pumpkin seeds and cranberries in a light, homemade raspberry vinaigrette. It has become a favourite of the waistline-watching dancers – a captive market "with a lot of cash in pocket," Irving points out.

"He made the menu beautiful and actually appetizing, and it's, you know, fresh food, so it's a lot better," said a woman who's been working at the club for nine years in "massage and VIP," who did not want to give her name. The woman, dressed in high, high heels and a (very) little black dress, said she enjoys the meatball sandwich – with spicy marinara sauce, mozzarella and Parmesan – and the classic Philly cheesesteak.

"Charlie" – who performed to the sound of Ted Nugent and the Allman Brothers in a black feather get-up (to begin with) during my visit – said she regularly dines on the Woodlands Smokehouse Po'Boy, and the dill-pickle chicken wings.

The strategy – to increase the lunch crowd by offering not just edible (although that was a plus) but desirable food – is bottom-line-motivated. And it appears to be working. While nobody tracked food sales before – the food operation was run separately by a long-time contractor – Irving figures they have at least doubled, and the club is moving more alcohol, too, as patrons wash their double-smoked pork-belly satay kabobs down with maybe a local craft beer or possibly a $300 bottle of Grey Goose.

"At the end of the day, this place is just like a pub. Sure there's naked women, but … it's like Cheers with boobs," says Irving, who is 44 and single.

"People that want to go watch the game, they think of a pub. So why not a pub that has naked women as well? Because if you're going with all your buddies, probably they're going to be on board with that." 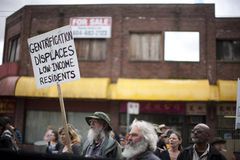