Boiled or steamed? Lemon or butter?

Perhaps you have not noticed it is lobster season.

Perhaps you do not daydream, come the drowsy midafternoon, of all the things you could do to a live lobster selling these days for $10 a pound, which is pretty cheap for a fresh thing 1,600 kilometres from the sea. Perhaps a vision of creamed lobster (steam, remove the meat, heat slightly in some butter in a frying pan, add half and half and a tablespoon of Miracle Whip and some salt and pepper, serve over white bread) has not filled your waking moments, even as it brings on the fear on incipient infarction.

That’s fine. We are all entitled to our philosophical opinions. But for those of us who love lobster, who know it to be one of the finer pleasures in life, eating Homarus americanus still presents a range of dilemmas:

Should I eat one?

This question, the foundational inquiry that precedes all others regarding lobster, wasn’t much of a concern until the late David Foster Wallace published his famous essay Consider the Lobster, in which he raises the possibility that a lobster has a right not to be eaten on grounds of cruelty. But even Wallace admitted that the subject was somewhat debatable, given the fact that lobsters may or may not – the evidence is inconclusive – experience pain. (“They’re absolutely primitive,” is the way Kimberley Shears, the manager of logistics for the Tangier Lobster Co. Ltd., explains it, and Shears may know more about lobster than anyone else on Earth.) What lobsters do have is several ganglia that cause them to respond to changes in their environment. The fact that lobsters predate us, and will likely be scuttling around after we are gone, is not a response to Wallace’s argument so much as something to think about.

Less philosophically fundamental than “Should I eat one?” this question is nevertheless asked more often, and is just as unanswerable. More people boil than steam, partly because it’s easier. But there are as many methods within the pro-boiling camp as there are campers. The general procedure is to bring a large pot of heavily salted (preferably ocean) water to the boil. Drop your lobster in back first (this may or may not reduce the stress the animal feels, and doesn’t change the lobster’s fate but may render the flesh more tender). Boil for between 10 (my preference) and 18 minutes (if you’re paranoid), for a 1 1/2-pound lobster, starting from the moment the water comes back to the boil.

Steaming – which Shears prefers – is more complicated. Fill the pot 10-per-cent full of salted water; drop the lobster in on its back, preferably on a steaming rack; add a pinch of sugar (optional, in case the lobster hasn’t been seasoned long enough, to permit the, um, evacuation of its last meal). Steam 18 to 20 minutes per pound.

Should a lobster be sautéed alive?

If you didn’t like the answer to question 1, you’re really not going to like this. Still: Jenna Mooers, the owner of Edna, an excellent restaurant in Halifax’s newly groovy North End, recently told me how her chef friends like to cook lobster. “You split the lobster in half, alive, and” – with the lobster still moving, because lobsters can do that – “pour hot molten butter into each chest cavity. You wait until you see the butter literally pumping through the body [lobsters have sinuses instead of veins]. Then you throw it on the barbecue.” I mentioned this to Kevin Beale, the chef at a gastro-pub called the Abbot, in North Toronto, and he said, “That sounds delicious. But I’m not sure I could watch it a second time.”

Incidentally, if you look Shears in the eye and say “Baked?”, she will reply “If you have to.”

Lobster is lean: A two-pounder is only 140 calories. It is high in cholesterol, however, even more so when the lobster meat is dunked in clarified butter. Frankly, I find butter too rich, and have taken to spritzing my lobster tail with lemon, which at least leaves you able to move again after the meal. Interestingly, people in Halifax used to eat lobster with vinegar (easier to find than lemons, cheaper than butter), which may have had something to do with the Nova Scotia imprecation against drinking milk after you eat lobster. 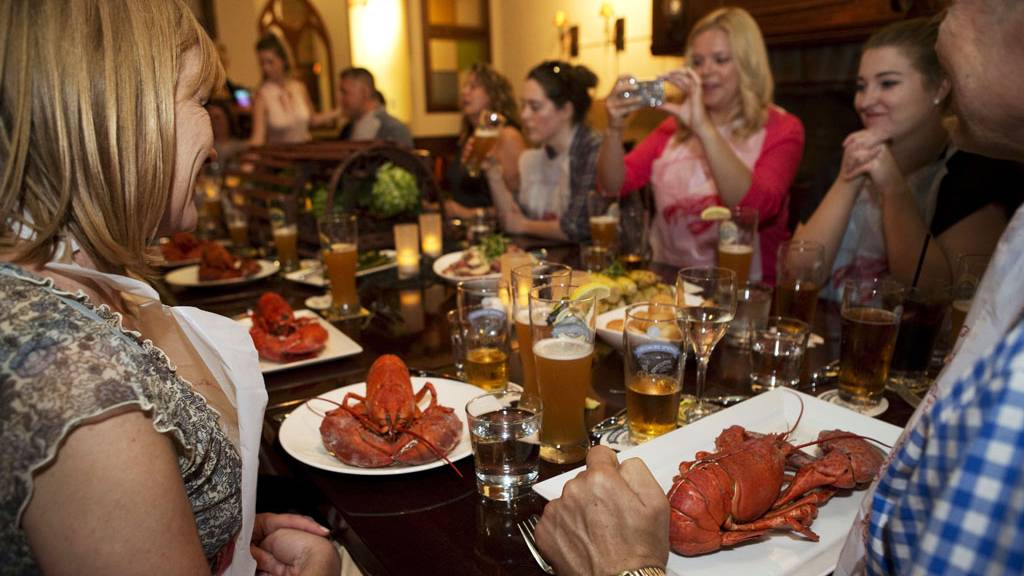 Ian Brown, right, prepares to eat a lobster dinner at The Abbot in Toronto. (Chris Young/For The Globe and Mail)

How does one eat a lobster?

Shears tells people: “Do not be afraid of the lobster.” This is excellent advice. Lobster is supposed to be hard to eat (that’s why they have survived as a species for so long). Lobster is also an animal you eat with your hands, cracking your way into its insides, preferably in a communal setting, where the hands-on eating makes for better, franker conversation.

Take your time. It’s not a race. Use a nutcracker and a tiny lobster picking fork, the full tool belt. Start with the claws. Move on to the knuckle meat. When you detach the legs from the body, detach the entire leg, from high up inside the chest cavity, and use a rolling pin to roll the sweet (and plentiful, if you know what you are doing) leg meat out of the leg opening. The tail is your last reward, and don’t forget the telson. Only 20 per cent of a lobster is meat, versus 85 to 90 per cent of a scallop.

Bib or no bib?

This dilemma depends on your capacity for irony. If you are an ironic type you will not feel uncomfortable wearing a vast plastic bib with a picture of your dinner on it. Otherwise, stick to a large linen napkin or even a freshly pressed dishcloth tied around your neck. It does the job better and doesn’t make you look like a character out of a John Waters movie.

Tomalley or not tomalley?

That is the bilious question. The green stuff in the head/body cavity (a lobster’s tail is actually its abdomen) is the lobster’s equivalent of a pancreas and liver and will reflect the taste of what the lobster has been eating: Frozen bait, for instance, makes tomalley sweeter. The roe is just as good, especially on bread. But you don’t have to eat either.

A lobster dinner at The Abbot in Toronto. (Matthew Sherwood / For The Globe and Mail)

I think this is no contest. Some people like to drink pilsner or weissbier with lobster, but in my experience, the ensuing bloat, especially if you dunked your lobster in butter, is going to make you want to lie down in the street like a concrete parking curb. Chablis and sauternes are classic, but a dryish sauvignon blanc or a Tavel rosé are my favourites.

Live lobsters don’t keep, and neither does leftover lobster meat. This tragedy, fortunately, produced the lobster roll, the ultimate leftover. There are many schools of thought on the best way to prepare your next-day sandwich: meat heated or cold, on white bread (popular in parts of Nova Scotia and Newfoundland) or a soft bun (white-walled baseball bun or standard submarine type, pan-toasted in butter or not), with or without mayonnaise/celery/tarragon, chopped small or chunky. To my mind, you have to reheat the chunky and plentiful meat (at least one lobster per roll) in a little butter before stuffing it into a butter-browned, white-sided stadium bun with some tarragon and maybe even some cayenne or a little nutmeg.

Purists such as Shears say even a toasted bun detracts from the beautiful mildness of good lobster meat. Although I completely disagree with it, I understand her point. Even Socrates preferred the plainest possible life, cut back to basics and nothing more – as long as there was still someone around to argue with, over a good meal. 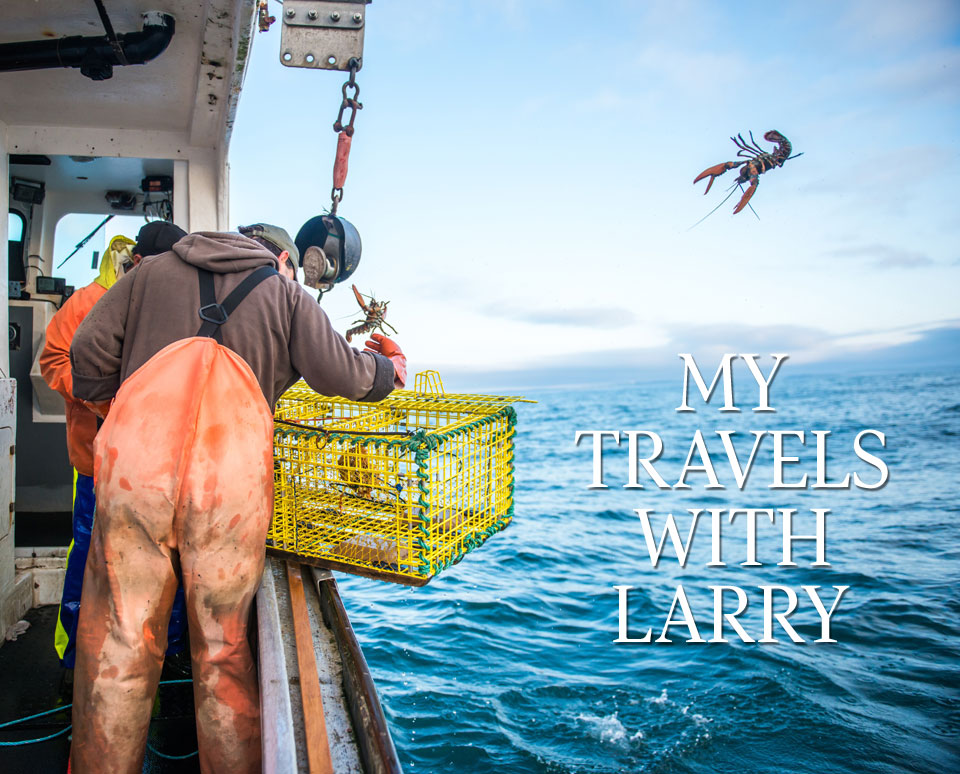