Meredith Boxberger is a 26-year-old woman who stands five feet, eight inches tall and weighs 130 pounds (173 centimetres, 59 kilograms). Which is to say, she does not look like someone who could eat 82 chicken wings in 10 minutes. "I think when I do look like a competitive eater, that's when I might want to get out," jokes Ms. Boxberger, a.k.a. the Deep Fried Diva, who lives in Barrie, Ont., where she owns and operates a Little Caesars pizza place.

On Wednesday, Ms. Boxberger – who is ranked 31 in the world by Major League Eating – will be one of two Canadian women (Calgary's Nicole Anderson has also qualified) competing for gluttonous glory at Nathan's Famous Fourth of July International Hot Dog Eating Contest in Coney Island, N.Y.

Ms. Boxberger spoke to The Globe about life as a Major League Eater.

How did you become a competitive eater?

I've owned my own business for the past four years and I've worked a ton of hours. I wrote up a list of things I really want to do, and enter an eating competition was one of them. There just happened to be a competition up here in Barrie and I thought I would give it a shot. That kind of started the whole thing.

What was the competition?

It was at a pizza restaurant called Pie. I qualified for the competition by eating a 12-inch pizza in about one minute and 50 seconds. In the competition I ended up eating five and a half medium pizzas [in 12 minutes]. I surprised myself a little bit with that one.

How do you prepare for an event? Do you stretch your stomach? Do you fast? Do you have a routine?

I don't have too much of a routine. I'm not a huge trainer. I do more along the lines of a typical athlete. I run a lot, I try to stay in shape, I try and get my cardio up. I've done some shorter practice runs. I'll take four hot dogs and try to get down a technique that I want to use.

I eat pretty healthy. I've had to obviously combat the amount of calories I take in between these contests. I eat a lot of salad. I don't have any crazy kind of diet, but I try to stick to healthy foods.

Of the competitions you've done so far, what's been the hardest thing to eat?

Why did you want to do the Nathan's competition?

Nathan's is really the only competition that separates the men and the women. I've never actually competed against a female yet.

Is there trash talking at these competitions?

Mostly it's between the guys. Everyone has been very welcoming to me. I think they enjoy having a girl on the scene. We take the 10 minutes of the competition pretty seriously and then everybody goes out for a drink together.

Is there any money in competitive eating, or is it just a passion thing?

At Nathan's, each winner of the women's and men's events gets $10,000 and there's a $20,000 purse for each division. Not a lot of people make a career out of competitive eating. But as it continues to grow in size, the chance to make a career at it will grow. Right now, for most people, it's a passion and a reason to get away on the weekend.

Why do you do it?

I think it's just the adrenaline rush of getting back into competition. I'm a pretty competitive person, so this is sort of like getting back on the field and competing again.

Don't take this the wrong way, but are you like a Boa constrictor? Do you not eat for days and days after a competition?

I have a little Boa constrictor in me, I guess. It's generally the next night that I have some sort of appetite. I definitely don't go out for dinner and ice cream after one of these competitions.

The next frontier for women? Hot-dog eating contests, apparently
July 3, 2011 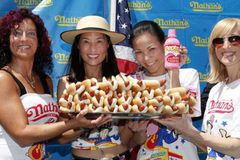 Step away from the hot dog: Should competitive eating be banned?
November 3, 2011 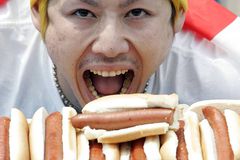