In January, I extolled the virtues of a sweet bread swirled with tahini and marmalade. Yet, there was the nagging sense I was leaving the conversation unfinished, as savoury breads warrant an equal moment to shine.

At 16, I was fond of pizza buns from a specific bakery; they were a quick and economical lunch while on break from my summer job. The size of my fist and modestly adorned, the tomato sauce dried out into a concentrated, crimson stain – tangy and salty-sweet – and strands of cheese would melt into a lacy skirt around the edge. You could snatch that cheese off and eat it last, which was my tactic, or press it into the bread as a crunchy one-bite contrast to the soft crumb.

Those buns, for all their humbleness, remind me of the potential of such endeavours. Since then, I've made my children mini loaves studded with cubes of salami and provolone, to be eaten with onion marmalade. And, I've stippled focaccia with fingertips, anointed it with olive oil, then tucked in golden cubes of roasted eggplant, followed by crumbled on feta and dried oregano. I bundle leftover keema (an Indian dish of spiced mincemeat) with potato and peas in a soft naan-like dough, add a spoonful of tomato chutney and bake them off in muffin tins. All these breads can be treated as snacks or meals unto themselves and travel like a dream.

Today it's a savoury babka, and a dough with enough structure to stand up to its filling. That filling, by the way, is a heady collection of kimchi, scallions, cheese and bacon. The kimchi brings its trademark funk and scallions a vital freshness, as the melting ooze of cheese rounds out the effects of both. The bacon pairs with a smear of gochujang for an unmistakable, umami-rich baseline.

As an additional draw, this bread transforms into some of the finest toast you could want. While some should be feasted upon warm from the oven, any leftovers are welcomed. Upon reheat, the bread takes on another character. The cheese crisps, the kimchi frizzles and curls, and the bacon sizzles and perks up. Glaze with cultured butter smudged with more gochujang and a pinch of crunchy salt and feast. Or, dress things up with a fried egg and greens.

The loaf is best in a standard or long Pullman loaf pan (13 or 16 inches long, respectively, and four inches wide), which will give a uniform shape and well-developed crust on all sides. However, two 9-by-5-inch tins can be used instead. If plaiting the split dough inspires trepidation, glaze the roll whole and bake as is, for a single-swirl loaf. 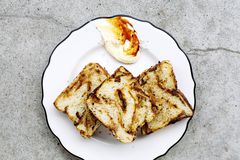 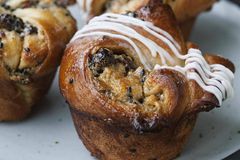 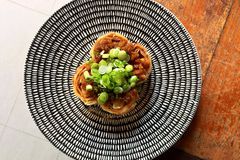