One of my favourite Montreal hangouts is a tiny dive restaurant with no sign. Its precise location and real name are not to be divulged upon pain of threatening the wildlife that congregates there. Smoking is permitted, among other indiscretions. Regulars – mainly night creatures in their 60s – know the joint by its Greek name, which translates roughly to The Dream of My Small Mountain Village. The dreamer in question is the owner, a six-foot-tall, sixtysomething transsexual with a cubist face, painted fingernails and long, blond, Pantene-perfect hair.

All that needs be said about its whereabouts is that it is located somewhere deep in Park Extension, a low-rent, multicultural neighbourhood populated primarily by immigrant families – and many of the city's best (and strangest) ethnic restaurants. Park Ex, as the district is affectionately known, boasts places such as a Halal Sicilian pizzeria, a Desi Chinese tandoori hand-pulled noodle emporium, a Greek taverna named Panama, and a Pakistani biryani house inside a former Mediterranean seafood restaurant with fishermen's nets still on the walls.

Its cheap rents and central location are making Park Ex a candidate for gentrification, but the main attraction is the food, from the fried calamari at Marven's to the buttery, cashew-filled Syrian pastries called kol w shkor at Mahrouse. People make their way here from all over town to pick up obscure spices, or to sample Sri Lankan specialties such as kothu roti (a soul-satisfying stir-fried concoction with chopped-up roti acting as a noodle stand-in) at V.I.P., or to eat steaks at The Dream of My Small Mountain Village.

This steakhouse-cum-nightclub is emblematic of a neighbourhood that remains something of a hidden gem. Everyone who ends up here finds themselves with the same predicament: wanting to rave about it and still keep it a secret.

On a recent visit, I found myself seated next to a woman with Cleopatra eyes who asked me the question everyone apparently asks everyone else who hangs out there: "So what's your mystery?"

"What do you mean?" I responded.

"I mean, how did you find out about this place?"

"A friend brought me. What about you?"

Her mystery turned out to be that her mom co-owned the place, an insiderness that prompted me to ask: "When is the best time to hang out here?"

"Never," she replied, taking a drag on her cigarette and looking at me through slit eyes.

That's the thing about non-gentrified places: The gentry aren't really welcome. But in a place like Montreal, where everyone feels like they don't belong, Park Ex fits in perfectly imperfectly.

More than a hundred different cultural communities now live here, in what has always been a landing spot for new arrivals. The first settlers were Eastern European Jews and Italians in the 1950s, then Greeks in the 1960s and 1970s, followed by South Asians in the 1980s and 1990s. Today, a significant new wave of outsiders is arriving: young families and hipsters.

As Mile End has become the next Williamsburg or Prenzlauer Berg – with real estate prices to match – the creative class is fleeing northward. A home in Park Ex today costs about half its Mile End equivalent. Artists, activists, documentary filmmakers and musicians are moving in. Members of Arcade Fire, Stars, Godspeed You! Black Emperor and the Dears all own homes here.

As a result, some people believe that Park Ex is on the cusp of a boom. "It's always the same story when artists move in somewhere, whether it's the Plateau, or Brooklyn, or SoHo," explains real-estate agent Jimmy Vitoroullis, who grew up in Park Ex.

You can almost feel the change in the air while having a thali on Jean-Talon Street. "This is definitely a neighbourhood in motion," acknowledges Mary Deros, city councillor for Park Extension. Beyond the encroaching bohemians, there are other telltale signs of transformation, from a new co-operative eco-café called Arterre, to art galleries, to a community-oriented IT company (Koumbit).

Right now, however, what makes Park Ex so fascinating is that it's an example of a pre-gentrified frontier. It is not yet trendy in any intentional sense. There are none of the hip Mile End trappings: no third-wave cafés, no curated lifestyle boutiques, no valet parking, no chi-chi supermarkets. Instead, there are Turkish delight shops and mom 'n' pop stores specializing in products from Ghana and the Antilles.

It's raw, gritty, almost un-capitalist. If any single concoction could be said to encapsulate the magic of Park Ex, it might be the kulfi on a stick at Sana, a green Popsicle of perfumed ice cream filled with almonds, pistachios and spices that costs a grant total of one dollar. Finding something so delicious, so cheap and utterly off-trend is one of those rare moments of discovery. It alone is worth the trip up to Jarry Street. (Although you would be remiss to not try the bitter gourd, the beef nihari, or the Lahori chargha chicken).

It all raises the question: Why hasn't Park Ex exploded yet?

"There is a certain sketch factor," admits Julia Chan of Montreal's Evenko production company, who has chosen to raise her family here. "But I've never felt unsafe."

Chan and her partner, Daniel Seligman, director of the Pop Montreal music festival, consider the edgy atmosphere part of the appeal. "If Park Ex is gentrifying, it's just domestic gentrification," Seligman notes.

It still has a ways to go. "We wouldn't open a shop in Park Ex at this point," explains Gen Heistek, owner of several boutiques in Mile End. "First, there needs to be a good café or a cool bar." Heistek noted, however, that she is considering moving there with her family.

Instead of pricey boutiques, there are Indian fabric stores, bootleg DVD shops, money-transfer operations, African hair product places and weird driving schools (several of them, including one named Hope, were closed for fraud last year). An electronics store called Chahat Audio Video also features a booth where a man in a turban prepares hand-rolled cones of paan, filling moistened betel leaves with areca nut, tobacco, spices, rose petal jam, lime paste and other exoticisms. Customers stuff their cheeks with the narcotic, spitting puddles of red saliva onto the streets.

It all makes for the feeling of having ended up in a foreign land – or on an altogether different planet, in the case of The Dream of My Small Mountain Village.

Walking through its doorway after midnight is like landing on Mars. Retirees are dancing horizontally on the floor. A multicoloured strobe light projects bursts of rainbow light onto a hypnotic mural of ocean waves. You are in international waters now: There are no laws here.

At the back of the room, beyond the card sharps and belly dancers, sits an analog sound system manned by a part-time pizza delivery guy with sparse white hair and a CD library full of outer-space synthesizer dance-party music. When the crowd gets going and the dance floor fills up and the DJ starts jumping up and down while issuing ear-piercing two-finger whistles, you almost expect someone to start firing a pistol into the ceiling.

It has the wildness that Montreal used to be famous for, and which it may be losing. "Magical places like this need to be preserved because their habitat is disappearing," explains Brett Stabler, a friend of mine who comes here regularly. He is opening a new restaurant and art space (called Bethlehem) as an homage to the "incidental anti-aesthetics" of dives like The Dream of My Small Mountain Village.

On a recent visit, we reminisced about a similar interzone café that used to be in Mile End called Scala. Today, its renovated space has become a booming wine bar with hot DJs and $43 roast chickens. Gentrification happens to the best of places – but the beauty of a transgressive spot like The Dream of My Small Mountain Village is that it's a throwback to the time when this was a wide-open city. Like Park Ex itself, it's the sort of place that every great city needs.

Whether it is bougatsas, melomakaronas, galaktabourikos or paximadakias you are after, Afroditi (756 rue Saint Roch, 514-274-5302) has a vast selection of classical Greek pastries.

Where's some of the best Québécois food in Montreal? You might be surprised
May 11, 2018 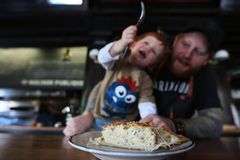 Montreal cuisine lightens up (but can we still get foie-gras poutine?)
May 11, 2018 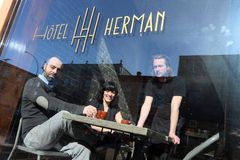 Montreal: More than smoked meat and the Métro
May 3, 2018 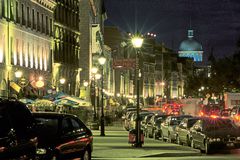