Based on his Instagram handle, Champagnepapi, one would think Drake would be more interested in bubbly, and certainly he has been quite vocal about his love of a good bacchanal, name checking Napa Valley in his lyrics and posting photos of himself mugging with a stemmed glass. But the 30-year-old has become the poster child for a new type of wine fan, one who's young, hip and loves rosé – or as some call it, "brosé."

"The whole 'brosé' thing, I don't understand why bros started drinking rosé," says Adam Vourvoulis, the 34-year-old behind the wine-culture parody Instagram account @natural_whine. The trend may have reached a tipping point this spring with the release of Forty Ounce Rosé, a French muscadet housed in a malt liquor bottle that's been endorsed on Snapchat by Khloe Kardashian.

Vourvoulis, who spent 15 years in the restaurant business and recently launched his own wine, Vin de California, points to a specific Los Angeles industry type who will bring rare "unicorn" wines to share with friends at a restaurant. "They're wearing their Yeezys and drinking their special wine. They want to show off that they have this wine and that no one else can get it," he says. Indeed, wine collecting offers up the chance to brag on a host of levels, showcasing knowledge, elitism, personal connections and wealth.

As the demographics of wine lovers expand to include more recent fans, the industry as a whole is becoming more approachable, with restaurants offering new ways for customers to experience wine. In March, Daniel Clarke launched Pinot League at his Toronto restaurant Skin + Bones, a competition that pits Ontario pinots against each other as customers vote for their favourites.

Unlike a rigorous formal tasting (check out the 2012 documentary Somm for an example), Clarke says the League is intended to be a fun way to introduce people to new wines. "At the end of the day, it's just three different wines and you just have to decide which one you like the best," he says. "There is no right or wrong, and it's a great conversation piece."

Another player opening up the wine conversation is Noble Rot, a London-based wine magazine with the cheeky slogan "Sex and Drugs and Pinot Noir." "We wanted to make a magazine that spoke in an informative and entertaining way about wine and food, within the context of popular culture," says Daniel Keeling, who co-founded the publication with Mark Andrew in 2013. Noble Rot has since featured the likes of Keira Knightley and Mark Ronson, and in 2015, opened the Noble Rot wine bar in Bloomsbury, popular with a younger demographic that Keeling says is far better informed than previous generations of new wine fans.

Big name producers, like Lindeman's in Australia, are catching on to the trend, too. In 2016, the brand launched the Gentleman's Collection in select Canadian markets, a shiraz and a chardonnay inspired by the 1800s history of company founder Dr. Henry J. Lindeman. It targets digitally savvy young men through social media influencers. "They love discovery and humour, but the stories need to be centered in truth," says global marketing manager Tasha Harp-Kennealy of the Gentleman's Collection buyer. "They gravitate to people, places and products that reflect their emerging sophistication."

It's this sophisticated storytelling that makes wine such an attractive commodity to a millennial male audience. Unlike other slickly marketed products, wine often has the legs to back up its reputation. According to Nielsen, natural wine in particular enjoys unprecedented popularity among those aged 21 to 34 (33-year-old rapper Action Bronson is a big supporter of this movement, as is 34-year-old actor Aziz Ansari, who filmed an episode of Master of None at Brooklyn wine bar Four Horsemen, which is owned by LCD Soundsystem frontman James Murphy), and there are plenty of approachable local producers, sommeliers and restaurant owners to engage with in person and on social media. To paraphrase Drake: What a time to be a wine lover. 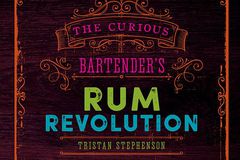 Fruity cocktails, prepared low and slow
June 23, 2017
Why wine is the stand-out in the long list of bourbon-infused products
June 26, 2017
Follow us on Twitter @globeandmail Opens in a new window
Report an error Editorial code of conduct
Due to technical reasons, we have temporarily removed commenting from our articles. We hope to have this fixed soon. Thank you for your patience. If you are looking to give feedback on our new site, please send it along to feedback@globeandmail.com. If you want to write a letter to the editor, please forward to letters@globeandmail.com.
Comments