Among the highly anticipated gala presentations at this year's Toronto International Film Festival is a documentary on Marilyn Monroe by director Liz Garbus. Love, Marilyn traces the bittersweet private life of a very public woman. Marilyn, and the festival as a whole, makes me think of Champagne.

The actress famously adored it. On the screen, she dunked potato chips into bubbly in The Seven Year Itch. In life, she was reputed to have once bathed in 350 bottles of Piper-Heidsieck. History's ultimate bubble bath.

In tribute to the documentary and the legendary star, the Ritz-Carlton, Toronto, has concocted a sparkling wine cocktail called the Tall Blonde with Red Lipstick, one of many fizzy drinks that will be showcased at TIFF hot spots over the next 10 days as part of a festival that will welcome such living sex symbols as Penelope Cruz, Keira Knightley and Jennifer Lawrence.

I'm not big on star gazing (video night on the couch is more my speed) but I do like to put on the spritz with a well-made bubbly cocktail when the mood for glam strikes. I may try a Tall Blonde, and not just because of the name. On the degree-of-difficulty scale, it's roughly medium and comes with an interesting special effect dreamed up by bartender Jonathan Neill of the Ritz Bar (formerly called Toca).

The first, optional, step is to cut an apple into small pieces and let them soak in brandy for two or three days, which adds subtle flavour to the spirit. If that's too ambitious, you can substitute Calvados, the French apple brandy, or use straight brandy. For colour and sweetness, reduce pomegranate juice into a thick syrup on the stove and add some simple syrup (sugar boiled in water in a roughly half-and-half mix and left to cool) or just add a pinch of sugar to the pomegranate juice. You're basically making grenadine syrup, such as Rose's, which you can also buy in a supermarket to keep things simple, if not as fresh.

Into a tumbler or cocktail shaker, pour 1 1/2 ounces of the brandy, 1/2 an ounce apple juice and dash of pomegranate syrup with a few ice cubes. Shake and strain into a champagne flute, then top up with about 4 ounces of sparkling wine.

"By layering it, you are able to see the colour contrast," Mr. Neill says. "It starts red on the bottom and goes to clear on top." Hence the "red lipstick." And for the special effect, drop in a pitted fresh cherry. "As the bubbles start to get going, the cherry pops up."

Mr. Neill uses a high-quality prosecco rather than expensive Champagne, a sensible strategy whether you're mixing a sparkling wine cocktail or taking a bubble bath.

At Soho House, a new private-member's club in the entertainment district not far from TIFF headquarters, Grey Goose global ambassador Dimi Lezinska will capitalize on the fest to plug his vodka brand with several new drinks. I think the most inspired, if you're a vodka fan, is Le Fizz. In a cocktail shaker, combine ice with 1 1/4 ounces Grey Goose, 1/2 ounce elderflower cordial and 1/2 ounce fresh lime juice. Shake and strain into a champagne flute and top with cold club soda. For more kick, you might want to use the excellent St-Germain elderflower liqueur from France in place of non-alcoholic cordial.

The Four Seasons Hotel, long a scene of TIFF action, will offer classic Champagne cocktails at its hot-ticket luncheon this Saturday hosted by former Hollywood Reporter columnist George Christy in the hotel's new, not-yet-open location on Yorkville Avenue. Drop a sugar cube into a champagne flute and soak it with 3 drops of Angostura bitters. Next, pour in a splash of brandy. Albert Kirby, manager of d/bar in the new hotel location, suggests up to 1 1/2 ounces. Then top with Champagne. "George Christy is very big on classics," Mr. Kirby says.

I'm big on that classic, too, the mother of all sparkling wine cocktails, immortalized as far back as 1869 by Mark Twain in Innocents Abroad. But I'd go easier on the brandy if the night is young – 2/3 of an ounce will put sufficient rouge on your cheeks to match any lipstick.

Mr. Kirby is working on two new fizzy drinks that will be featured at d/bar after it opens Oct. 5. One is a riff on the French 75, which classically features 2/3 ounce gin, the juice of half a lemon and 2 dashes of simple syrup, all topped with Champagne. Mr. Kirby uses 1 ounce gin and small dabs of maraschino liqueur and blackberry puree instead of lemon juice. It will be rechristened after the hotel adjudicates a name-that-drink Facebook contest.

The other Four Seasons drink, still in the works, is a "molecularized" take on the kir royale, a classic that combines Champagne with the black currant liqueur known as cassis. Mr. Kirby will use Chambord black raspberry liqueur and coagulate it into dark purple, caviar-like pearls using a jelling agent. "It's still a classic cocktail but we're playing around with the texture," he says. "If I get the sugar content just right, the pearls should be suspended and float up and down." A fitting metaphor for fame and fortune. 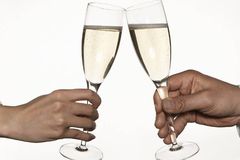 Why wait till midnight to pop the bubbly?
December 28, 2010
More fizz for your buck: Try these sparkling wines on New Year's
December 20, 2011 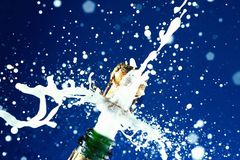