It sounds like a plot line from Borat by way of Monty Python. An English dairy farmer looking to diversify into a more lucrative business teams up with a local sculptor to distill a super premium vodka out of cow's milk.

Except there's no bull to this bovine-beverage tale. Black Cow Pure Milk Vodka is real – made without potatoes, grain or even water, just the sweet whey from grass-grazed cattle in bucolic West Dorset.

At $50, the luxurious oddity is a striking success, too, thanks in part to the imprimatur of ritzy retailers Fortnum & Mason and Selfridges, numerous high-end restaurants and most of London's tony private clubs, including Soho's famed Groucho Club. Actresses Cate Blanchett and Elizabeth Hurley reportedly like it. Ditto the actor and comedian Stephen Fry, who tweeted about it. So does Daniel Craig of vodka-martini-imbibing James Bond fame. Now it's available in Ontario, its only foreign market so far, besides California.

"It's a super smooth vodka like any other super premium vodka but it has this creamy finish," said Black Cow co-founder Paul Archard (the sculptor as well as a former TV-advertising director). He was in Toronto last week to promote not just the booze but also an excellent cheddar produced by business partner and friend Jason Barber, the dairy farmer.

I'd agree about the creaminess, which is striking compared with the texture of any other vodka that comes to mind.

It's a superb product. But don't just take my word for it. Tom Parker Bowles, the food and drink critic for London newspaper The Mail on Sunday, called it "one of the most remarkable things I've ever tasted."

Archard said inspiration for the beverage came several years ago when he and Barber were tasting a rough eau-de-vie they had distilled from their homemade apple cider. A Polish-born worker at Barber's farm was called in for his expert verdict. "The Poles really know a lot about making booze out of almost anything," Archard said. "They have a tremendous artisanal tradition." Alas, the employee was far from bullish about the distillate. "Then he looked out the window at Jason's garden and over the wire fence to his herd of 250 cows and said, 'You know, you can make good booze out of milk.' And I could see a light bulb going off in Jason's head at that point."

Subsequent research revealed that various peoples, including Mongols, Tibetans and Siberians, had been fermenting low-alcohol beverages from lactic liquids for millennia, including from yak and mare's milk, as well cow's. The crucial chemical component is lactose, the natural sugar in milk.

Black Cow separates the whey from the cheese-producing curds and ferments the former with a special yeast similar to that traditionally used in Tibet and Mongolia, which can survive in the acidic lactic environment. This yields a weak milk "beer" of 2.5-per-cent alcohol by volume. The resulting brew then gets distilled, like most vodka, to 95- or 96-per-cent alcohol.

But that's where Black Cow parts company with every other fancy booze brand on the shelf. Rather than adding spring or glacial water to dilute the spirit to a drinkable 40 per cent, Archard and Barber add back nothing but milk, which undergoes a proprietary process to strip solids and colour, yielding a crystal-clear end product.

"There's only five parts per million of lactose in it by the time we've finished, so although it's entirely made from milk and all the alcohol comes from the lactose, it's totally suitable for people who are lactose-intolerant," Archard said. He calls it the world's first vodka made entirely from grass-grazed cow's milk.

But in Canada he must bite his tongue, at least where the law is concerned. Black Cow, which produces about 100,000 bottles annually, in this country was forced to call itself a "spirit drink" because it's not made from potatoes or grain, the standard vodka sources.

"I can call it Black Cow Vodka everywhere else in the world but in Canada," Archard said. But he adds it's no bother. Ciroc, a luxury French brand distilled from grapes, faces the same problem, he noted, as does California's Hangar 1, distilled from both grapes and grains. Archard saw it stocked at an LCBO store between Grey Goose and Tito's, two top vodka brands, and was pleased.

There's another point of differentiation with many brands on the crowded vodka shelves. There will, Archard says, never be a flavoured spinoff, "not even a gin." The company's focus will forever be on cheese and a single, simple craft spirit. "A lot of vodkas have pitched themselves at nightclubs and that kind of thing, and we see ourselves as a foodie's vodka because of where we come from, our geographical and our actual physical provenance," he said.

In a nod to culinary traditions of Eastern Europe and Scandinavia, he recommends Black Cow with such items as cured meats, oysters and salmon. And, of course, with Black Cow Deluxe Cheddar, now sold at specialty-grocer locations, such as Toronto's St. Lawrence Market and the Cheese Boutique.

The vodka may be at its creamy best, though, on its own, I'd say – on the rocks or, martini-style, with a lemon-zest twist or briny olive to counterbalance the texture.

One caveat: Under no circumstances mix it into a white Russian, the vodka-cream-and-Kahlua cocktail made famous by Jeff Bridges in The Big Lebowski, tempting as the creamy association may be. There's enough dairy in Black Cow already.

Bartenders experimenting with new ingredients to cater to variety of diets
November 12, 2017 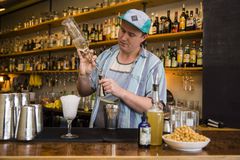 The man who put British Columbia on the international wine map
November 12, 2017 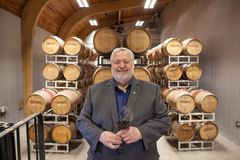 Hail Caesars: When did Canada’s favourite hangover helper turn from a drink into a meal?
November 12, 2017 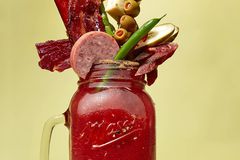