A discerning drinker ("wine nerd," if you prefer) might be inclined to detect a soupçon of wild herbs in the excellent new 2015 syrah from British Columbia's Laughing Stock Vineyards. It's an intriguing essence and fitting complement to the lush fruit of the full-bodied, velvety red. Winemaker David Enns, who owns the Naramata-based estate with wife Cynthia, believes nearby Anarchist Mountain may have something to do with it.

"It's just covered in sage," he said of the slope that rises up from his five-hectare Perfect Hedge vineyard in Osoyoos in the south Okanagan near the Washington border. Heat extremes for which the desert pocket is known tend to release volatile compounds from the giant, decades-old bushes, he adds. "And you get an herbal note, which will get absorbed somewhat by the skins on the syrah."

The herbal essence may (or may not) be a happy accident of wind transfer, but the wine's other qualities, including its impressive structure and smooth concentration, certainly owe a considerable debt to smart vineyard management and intricate vinification techniques in the cellar. Enns goes to impressive lengths to turn out his version of a meaty and muscular grape that, thanks to such other standout producers as Le Vieux Pin, Nichol and C.C. Jentsch, has rapidly grown to rival merlot as the south Okanagan's signature red variety.

It starts with not one but two harvests. The first syrah batch gets picked when Enns' nearby viognier vines ripen so that he can add a small proportion of the floral white grape into the vat and co-ferment the varieties in the signature style of great syrah producers of France's Côte Rôtie appellation in the northern Rhône. (Even a 3-per-cent dash of white viognier can add aromatic verve and help stabilize syrah's colour for a richer hue.) The second syrah batch is picked about a week later and vinified separately for a riper contribution to the final blend.

In the cellar, Enns then crafts three separate wines from all that juice. The syrah-viognier blend gets fermented in 5,000-litre stainless-steel tanks for maximum fruitiness and is gently stirred using bubbles from a compressed-air machine rather than the standard, more aggressive, liquid-circulating pumps, which can lead to bruised flavours. A second batch of syrah juice is fermented in 500-litre wooden barrels that are later used also for maturation, a step that helps to better integrate the wood's vanilla and spice characters. Finally, a third component is fermented in a tall, 2,600-litre French oak tank designed to accommodate not just de-stemmed grapes but also whole clusters -- tannic stems and all. Enns fills the tank in 60-centimetre-high layers, alternating whole berries with whole clusters, as though he were composing a gigantic ice-cream parfait.

"Especially in ripe years like 2015, the extraction from the stems is really magnificent," he said. "You get this backbone to the wine that's just pretty special."

Enns says that when the three components are blended together, the result is always better than any constituent part.

Laughing Stock's 2015 syrah is one of several excellent new B.C. reds from the warm 2014 and 2015 vintages reviewed below. (They're mainly available through private wine stores in the West and direct from the wineries, some of which will ship to consumers across Canada; the 2014 Burrowing Owl Syrah is available in select Ontario stores.)

My selections include some stellar pinots and merlot-led blends as well as two syrah-based wines from Road 13, which has been specializing in Rhône varieties for years. "I firmly believe that syrah is the single best varietal for the south Okanagan," Joseph Luckhurst, Road 13's general manager, told me recently. "What we've seen is that it's consistent from vintage to vintage, something to hang our hat on. You can make a killer cab in the south Okanagan, but it's difficult to do it year after year."

To my mind, Road 13's 2015 Syrah and 2015 Syrah Malbec blend taste uniquely Okanagan, combining the ripe richness of a sunny, dry climate with a fabulous blast of peppery spice and the firm structure classically associated with the northern Rhône. I jokingly asked Luckhurst if his vines in the south Okanagan happen to be situated anywhere near a peppercorn plantation. "Not quite," he said with a hearty laugh. "If we were getting transfers of flavours, that wine would taste like rattlesnakes. We get a lot of rattlesnakes."

The 2014 edition of Painted Rock's flagship and fabulous red is a blend of 33-per-cent merlot with lesser proportions of cabernet franc, malbec, petit verdot and cabernet sauvignon. It's a benchmark for Okanagan wines based on the Bordeaux grape mix, luscious and lavish yet kinetic and mineral-flinty in a Médoc way. The main flavours hint at cassis, blackberry jam, dark chocolate, vanilla and smoky cedar, supported by chewy-ripe tannins. Approachable now, it should improve with up to 15 years in a cool cellar. www.paintedrock.ca.

Inky purple in a way that's reminiscent of youthful, high-priced Argentine malbec. And this delivers the crowd-pleasing, youthful fruitiness of a malbec, though the blend is mostly syrah (at 70 per cent) with 24-per-cent malbec, 3 per cent viognier and, oddly, 3-per-cent gamay. Super-rich and seamless in texture, it delivers a thick essence of plum along with big, peppery spice, espresso, leather, fall foliage and vanilla. If the French could make a wine like this, they'd charge $80 and call it a bargain. Road13vineyards.com.

Paging northern-Rhône fans: Perfectly ripe fruit suggesting blackberry and currant jam is interwoven with licorice, leather and lavender. It's like fruity allsorts packaged in French stiletto shoes. Plus a whole lot of black pepper. And if you like Rhône-style whites, do yourself a favour and order Road 13's superb, silky-succulent 2016 Marsanne at a very reasonable $20.87. Road13vineyards.com.

Ripe and lavish yet disciplined by well-buffed tannins, which supply the backbone. The velvety texture delivers notes of blackberry, plum, coffee, licorice and pepper along with a nuance of Provencal herbs (or is that the wind-blown sagebrush from nearby Anarchist Mountain?). This sumptuous red carries its 14.9-per-cent alcohol well, with no trace of heat. www.laughingstock.ca.

Medium-bodied, juicy and intriguingly earthy, with a cherry and raspberry core and hints of beetroot, smoke and spice. Fully ripe (unlike too many weedy, overcelebrated cool-climate pinots) yet bright and tangy on the finish. This is subtle, trim and elegant pinot – crafted in a style that more people should come to appreciate. Available direct, www.liquiditywines.com.

From a stellar pinot noir producer, this gem is sourced from vineyards in South East Kelowna, where the relatively cool climate favours such varieties as pinot, chardonnay and riesling. Medium-bodied, the wine is fleshy and obviously ripe, with jammy strawberry and cherry fruit infused with essences of caramel, damp earth, smoke and nutmeg. Remarkable depth of flavour and lively spice. Refreshingly bright acidity for such a warm year. Think of velvety, perfumed Volnay – only with more sunshine. Available direct, www.mfvwines.com.

So smooth and dense it could have been named Trump instead of Syrah, this is rich with flavours of blackberry, blueberry, espresso and dark chocolate, lifted by notes of licorice and peppercorn. A seductive and generous Okanagan syrah. Available in Ontario.

This contains 5-per-cent petit verdot, a late-ripening grape that no doubt added tannic backbone and darker colour to the merlot. Bottled unfined and unfiltered, it's medium-full-bodied and supple, with cherry-plum fruit joined by dark chocolate and a savoury tang. Velvety yet not at all wimpy the way most merlots at this price tend to be. Serious and interesting merlot for the money. Available direct, Stagshollowwinery.com. 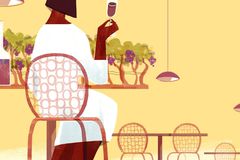