Outside of Quebec, Canadian craft cider is still in its infancy and the new cideries coming on the scene continue to surprise and delight. Witness the results from this year's Great Lakes International Cider and Perry Competition, the world's largest: Five out of 18 Best in Show awards went to Canadian cideries and three of those winners are less than four years old.

To taste the medalists, skip the shops and go straight to the source: Specialty craft cider is made seasonally in small batches and is often tougher to get your hands on than hyped-up craft beers. But the six winners are all worth seeking out.

Fredericton's Red Rover is crafting British-style dry ciders using local dessert apples, while London, Ont.'s Toboggan Brewing is making a name for itself with fruit ciders. Also in Ontario, Thornbury's Grey & Gold turned heads for its complex, farmhouse-style off-dry cider, and the place isn't even open yet (stay tuned for a review once you can get your hands on it). Unsurprisingly, Quebec swept the ice-cider category, with Cidrerie du Minot taking first and second spots and Cidrerie Milton (formerly Les Vergers de la Colline) placing third. The latter is embracing a new experimental ethos: barrel-aging, hopping and using zany varietals, and picking up medals for these cider styles, too.

This flagship cider beat out 77 other entries to be crowned king of Modern Dry Ciders. This highly carbonated cider begins with bouquet of bright apple, white flowers and light cantaloupe leading to flavours of apple peel, racy acidity and light tannins. Pro tip: Drink a glass, then put it back in the fridge until carbonation dies away and try it again. The cidermakers originally devised this as a still cider, but found drinkers weren't ready for it just yet. You can only get it in New Brunswick right now, but the company promises Canada-wide online ordering soon. $9.79/750-ml bottle in New Brunswick

The smooth, vanilla-soaked oak-aged Cuivré fût de Chêne picked up first this year but can only be had at the cidery, about one hour outside of Montreal. Luckily most Quebec grocers and dépanneurs stock the cidery's Cid Rosé, a blush-hued drink that gets its colour from the bright red skins of the Dolgo crabapple and was named Best Cider in North America at last year's awards. Notes of apple, currant and rose petals dance on a tart, sparkling sip. $13/four-pack in Quebec

Retired fire captain Martin Nygard turned a lifelong hobby into a second career when he began making ciders for this London, Ont., brewpub. He's producing off-site at venerated Twin Pines Orchards using their fresh-pressed juice. The rhubarb cider, made with the locally grown perennial and a hint of strawberries, beat out 139 other entries for Best in Class, and goes on tap in July. But don't wait that long for a taste of Nygard's style: Try the sweet and tart, superjuicy Blackberry Cider on tap now. Available by the glass at the brewpub only. London, Ont. 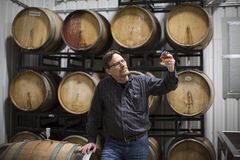 Got vodka? Spirit distilled from cow’s milk all the rage in Britain
May 1, 2017
Follow us on Twitter @globeandmail Opens in a new window
Report an error Editorial code of conduct
Due to technical reasons, we have temporarily removed commenting from our articles. We hope to have this fixed soon. Thank you for your patience. If you are looking to give feedback on our new site, please send it along to feedback@globeandmail.com. If you want to write a letter to the editor, please forward to letters@globeandmail.com.
Comments