A single grapevine teems with life. There's the fruit, of course, but I'm mainly talking about the tens of millions of microscopic bits of yeast, fungi and bacteria clinging to the ripe grape skins.

Centuries ago, it was this eclectic community of microflora that brewers, vintners and cider makers used to kick-start fermentation, the process whereby yeasts feed on the sugars turning them into alcohol.

Results were mixed: Some were delicious, but when you work with wild-yeast strains you're betting on the science of nature, and nature can taste downright nasty. In the 1840s, yeast was identified as the cause of fermentation and since then, the best "wild" strains have been commercially cultivated to create a consistent, reliable product.

Now, it's going in the other direction. A growing number of Canadians are turning back the clock, inviting wild yeasts and other microflora into their recipes.

They're slowly transforming the flavours in our pint or wineglasses – adding a whiff of the hayloft, a bright pop of mango or a cider-vinegar-like tang. Winemakers and brewmasters say this is in part to satiate a new thirst for complex flavours. It's also about a pursuit of terroir – the taste of the place where grains and fruits are grown and fermented.

Shea A.J. Comfort is an expert in alcoholic fermentation known in the industry as "the yeast whisperer." He says drinkers' palates are more embracing of wild flavours than they used to be. "The rise of organic and Slow Food movements have given us a general sense that things were tastier in the past," says Comfort, who lives in California.

"Plus we've got shops for pickling, kimchi and kombucha that are bringing the unseen world of fermentation to light. When indigenous fermentation works, you get an undeniable complexity that doesn't come from one cultured yeast strain."

But, he warns, it can be a dangerous game. "With every culture you pull up that you think is good, there are literally thousands more possibilities – you can wind up with flavours that taste like goats in the sun," he says. And if the nastier types of fungi get into a brewery or winery, they're almost impossible to kick out. To keep the baddies at bay, vignerons are vigilant about cleanliness.

The quest to uncover a uniquely Okanagan character in wine is what drove former wine agent Christine Coletta and her husband Steve Lornie to open Okanagan Crush Pad (OCP), one of the biggest and most ambitious "natural" wineries in the country, six years ago. The couple delayed retirement to do so. At OCP in Summerland, B.C., all wood has been expunged from the winery, including grape-picking baskets. Fungi control is part of the reason their wine is fermented in concrete tanks.

Coletta's philosophy is to use only what's available in their organic vineyard to make their wine, including the yeast. "When you use commercial yeasts, you get flavours that are not native. So for those of us that are making terroir-inspired wines, they're unwelcome guests," Coletta says.

There are many terms for the type of winemaking they practice – natural, organic, minimalist, biodynamic or wild – but in essence it describes a process where the vintner intervenes as little as possible.

Minimalist winemakers view commercial yeasts, and other common practices, such as oak aging, nutrients, enzymes and heavy sulphites as additives. (It's a position that rankles many Canadian winemakers who do use these things, and also believe their products are natural and express a taste of place).

Instead, natural winemakers take a gamble on nature. OCP, along with other minimalist wineries like Kelowna's Summerhill Pyramid Winery, Niagara-on-the-Lake's Southbrook Vineyards and Jordan, Ont.'s Pearl Morissette, harness the community of microbes living in the vineyard. After grapes are picked, they're crushed and left to ferment with the microflora living on their skins.

The end result is slightly hazy wines with an unnerving texture and layered complexity. OCP's 2014 Free Form Sauvignon Blanc has whiffs of sweetgrass, strawberries, musty apples and peaches, and finishes bone-dry and slightly medicinal. Unfiltered and left on their lees (yeast debris) in the bottle, the wines are living beings. If you don't like the first glass, put the bottle back in the fridge and you'll have a completely different flavour the next day.

While both beer and wine fans are getting into wild, or indigenous, yeasts, the process for making each drink is very different. Take brettanomyces, a species of microflora that natural winemakers hate at high levels, associating it with unflattering aromas such as wet dog, burnt plastic or smoked meat. Brettanomyces in all of its forms – from barnyard funk to ripe pineapple – is a major attraction in wild ales.

That's due in large part to the venerated Belgian tradition of lambic beer, a style that dates back to the 14th century in Brussels and the surrounding area. Unlike winemakers, brewers can't rely on fruit to collect microflora. Instead, lambic producers leave hot wort (a sugary mixture made by steeping barley in water) to cool overnight in a giant, shallow pan called a coolship, in a room with a window open to let in outside air.

As the wort slowly cools, various strains of microscopic yeast begin the fermentation process. The next day, the wort is transferred into old barrels to ferment a second time, this time as a motley crew of flora and fauna inside each barrel do their thing for up to three years. This technique is still practised by a handful of Belgian breweries today, most famously Cantillon, a pilgrimage site for beer lovers whose mouths pucker in reverence after sipping its bone-dry, vinous and lactic golden ales with delicate layers of woody spice, florals and funk.

Last May, after spending time in lambic blending houses, brewmaster Paul Gautreau of Alberta's Big Rock was inspired to start his own lambic-style side project. (Lambics are a protected appellation; spins on the style are loosely categorized as American wild ales). To keep the rest of his brewery from being infected, Gautreau built his own "wild-beer bunker" – a locked room with a 20-foot-long coolship, used wine barrels for aging, separate drainage, aprons, gloves and a boot washer, and only one key. To kick-start fermentation, he opens two large louvres in the walls, letting microflora from the the brewery's own garden and the region of northwest Calgary do its thing.

Ontario brewery Nickel Brook opened a Funk Lab last year in its original Burlington brewhouse, after it moved its main production to a larger facility in Hamilton. "We don't have the space for a coolship," says brewmaster Ryan Morrow, standing in front of bourbon and wine barrels stacked three high. Unlike "natural" winemakers who don't want to interfere with the science of nature, Canadian brewers MacGyver the funk out of wild ales, and Morrow uses a mix of techniques to make his beer.

Nickel Brook's Brett Pale Ale is fermented with a commercial strain of brettanomyces isolated from the tastiest lambic strains. Morrow also blends a "clean" malty ale with an older version that's aged in bourbon barrels, spiked with brettanoymces, for a year. Out comes the coveted Cuvée: a vinous, silky sipper with notes of plum, baking spices, sour cherry and oaky tannins.

If Morrow and his team come across a nasty barrel – they dump it. It's painful, but the loss is nothing compared to having to kiss an entire block of grapes, harvested just once a year, goodbye. Coletta hasn't had any batches she didn't like, but it is a risk.

Is it worth it? Comfort has mixed feelings about natural wines. "It's rare that there's not something in the background that bothers me a bit, it might be slightly metallic or funky," he says. "But I've also tasted some stuff that's been unbelievably phenomenal. It's like a unicorn in the woods – doing normal winemaking, you're never going to catch one of those."

The list of breweries and wineries on the chase keeps growing. Two new breweries launching later this year, Bench in Beamsville and Blind Enthusiasm in Edmonton, will do so with a coolship in place, and the term "wild fermentation" is showing up on an increasing number of wine bottles. 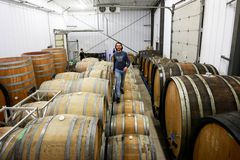 With clever craft-beer names running dry, brew makers turn to song lyrics
April 11, 2017
Ontario’s cider makers struggle with restrictive regulation
June 5, 2017
Follow us on Twitter @globefoodwine Opens in a new window
Report an error Editorial code of conduct
Due to technical reasons, we have temporarily removed commenting from our articles. We hope to have this fixed soon. Thank you for your patience. If you are looking to give feedback on our new site, please send it along to feedback@globeandmail.com. If you want to write a letter to the editor, please forward to letters@globeandmail.com.
Comments