My esteem for wedding planners runs deep. Theirs is a demanding skill set – equal parts etiquette maven, fashion consultant, economist, music scout, florist and therapist. Not my strong suits. (I have enough trouble matching socks with trousers.) Yet every year around this time I find myself channelling Jennifer Lopez to wrestle with that inevitable reader question: "I'm getting married! Can you recommend a decent red and white for 12 bucks? P.S.: We're having sushi, roast beef and vegan chana masala." Occasionally I'm also asked about bubbly and spirits.

Besides "lots" in response to that last consideration, I usually have as many questions as answers. Every wedding is unique, and tastes are hard to anticipate. According to a recent poll by Weddingbells magazine, the average Canadian reception this year is expected to include 124 guests. I dare say it's easier to land Mr. Right (or Jennifer Lopez) than identify two wines for $12 that will bowl over everybody in such a large group – regardless of the food on the table.

With that caveat in mind, let me (cautiously) offer some cheap-chic suggestions as well as general pointers should the Big Day be around the corner for you.

A top white option: Marques de Riscal Rueda 2012 from Spain ($11.40 in Ontario). It's light and crisp but substantial in flavour, offering notes of melon and red apple that should hold their own against the smog of cologne and perfume. On the red front, I'd suggest Pasqua Villa Borghetti Passimento Rosso 2010, a medium-bodied, velvety Italian that can span the spectrum from fish to beef. Full disclosure: It costs $12.95 in Ontario, but you're saving 60 cents on the Rueda, and it wouldn't be a wedding if you came in under budget. Alternatives: Fleur de Coucou Touraine Sauvignon 2011 from France ($11.75) and Castillo de Almansa Reserva 2009 from Spain ($11.95).

By all means opt for a broader selection, including a microbrewed beer and decent spirits, says Roseanne Dela Rosa, associate editor at Weddingbells. "Don't assume everybody has the same taste as you," she wisely notes. More choice won't tax the budget because the outlay ultimately comes down to consumption. If you're hosting at a private locale and shopping directly from a store, you can in most cases return sealed leftovers for a refund.

One category that could unnecessarily squeeze finances is bubbly. It's festive, certainly, but don't feel coerced merely because of the celebratory optics. Geneve McNally, one of the founding partners and principal planners of DreamGroup Productions, a Vancouver wedding and event-planning company, warns that sparkling wine is wasted on a lot of people. "They will just do a toast and then you have half-filled glasses sitting around," she says. "I say do it for the right crowd." Her current favourite: Blue Mountain Brut from British Columbia ($23.90), a brilliant choice, I might add. My bargain favourite: Segura Viudas Brut Cava from Spain ($14.25).

Alternatively, you could consider a themed cocktail, which ranks up there on the wedding-trend-o-meter with food trucks, live-streamed video and carbon-neutral receptions. I can't offer a recipe, since I don't know your tastes, but I gather that lavender, elderflower liqueur and the colour purple are in vogue. On that last point, McNally offers a warning. Fixating on a colour to match your flower hair clips or the bridesmaids' dresses is "a mistake. Don't send a venue a swatch of your dress and say 'match it' because it's going to be full of blue curacao."

Craft the drink to capture a mood rather than hiring Benjamin Moore to play bartender, she advises. It could be spiked lemonade in mason jars with fat drinking straws for a down-home feel, for example, or margarita shots served in hollowed-out lime halves for an upscale spring-break vibe. And take the time to taste in advance. McNally says she's seen more pitiable potations than pleasant in her 16 years in the business.

And yet, there are exceptions. Last summer McNally braced for disappointment when a purple-smitten bride and her gal pals devised a vodka-based pitcher drink to match the purple flowers planned for a tony Hotel Vancouver wedding. "It was delicious," McNally says. After the first few pitchers were drained, "they had to keep going back and making it. They couldn't keep up with demand."

What's your advice on picking wines for a summer wedding?
April 10, 2013 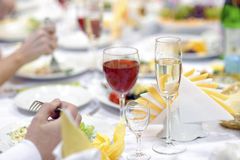 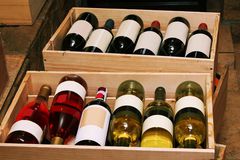 Raise a glass to budget bubblies
December 3, 2008
Follow Beppi Crosariol on Twitter @Beppi_Crosariol
Report an error Editorial code of conduct
Due to technical reasons, we have temporarily removed commenting from our articles. We hope to have this fixed soon. Thank you for your patience. If you are looking to give feedback on our new site, please send it along to feedback@globeandmail.com. If you want to write a letter to the editor, please forward to letters@globeandmail.com.
Comments