We took our children to the Toronto gay pride parade when they were 8 and 10, a long-ago outing I remember being filled with fun and goodwill - though not without its complexities, as when the leathered-up S&M guy marched by with his "Hurt the One You Love" sign.

Never mind. The mood was celebratory on that early summer day as we stood shoulder to shoulder with a gay elementary-school vice-principal who, when a Dame Edna look-alike sashayed past, bellowed: "Get a leg wax!"

The vice-principal complimented us on bringing the kids. But it didn't feel all that out there to expose our children to what was already a universal celebration of sexual and personal freedom.

Pride, of course, has always been political. But the politics have been about legitimizing and celebrating being gay. About supporting gay rights. And admonishing regimes - even as far away as Iran - for being homophobic.

Not any longer. By reversing their decision and, despite controversy, continuing to allow a group called Queers Against Israeli Apartheid (QuAIA) to march again this year, the parade organizers have made it about something much more complex and uglier.

The best sign I've heard about involving Jews at a pride parade was a clever one about who's really gay: "One in a minyan." (A minyan is a gathering of the 10 men - or, in more progressive Jewish circles, men and women - needed to hold a religious service.)

QuAIA is another story. "Israeli apartheid" is a loaded, misleading and inflammatory label. There is no policy of apartheid in Israel. There is, instead, a war over land in which both sides are culpable. The result is that many Palestinians live in deplorable conditions. On the other hand, many countries in the Middle East do not acknowledge Israel's right to exist. In some of those countries, by the way, being publicly homosexual is a death sentence. Anyone for Queers Against Murderous Mullahs?

Toronto's pride parade organizers initially banned QuAIA, sparking a firestorm within the lesbian and gay community. The group, framing it as a free-speech issue, swiftly began to marshal overwhelming support and spread the word that they were going to march anyway - in the thousands.

In the end, the organizers gave in to a juggernaut. In an agreement partly brokered by leading gay activist Brent Hawkes, senior pastor of the Metropolitan Community Church of Toronto, the parade's organizers decided that all groups are welcome as long as they sign a City of Toronto "anti-discrimination" clause. In other words, let the city decide what's inflammatory and what's not. (The city has said the phrase Israeli apartheid "may" contravene its anti-discrimination policies, but no final ruling has been made.)

There are some gay activists not on the side of QuAIA.

"I absolutely have trouble with the phrase 'Israeli apartheid' because it closes down the discussion," Rev. Hawkes told me in a phone interview. "Would I prefer it not be used? Yes." He is such an unabashed supporter of Israel, he says, that in a previous gay pride parade he carried three flags - the rainbow flag, the Canadian flag and the Israeli flag.

But even Rev. Hawkes, who describes himself as being in the "big middle," can't disguise the fact that for now pride has been politically hijacked, and the result may be disaster. The Tory government, likely in a nod to its socially conservative base, has already cut funding to the Toronto parade, even though it is a major tourist attraction. Now, corporate sponsors such as Rogers and Via Rail will also be under pressure to withdraw financing on the grounds they'd be supporting intolerance against Jews and Israel.

Of course, there is the free-speech argument that says that so long as they're not engaging in hate speech, let anyone march and let people make their own decisions about what to believe in. And it is certainly not anti-Semitic to question Israel's policies. If it were, many of that country's own citizens would be considered anti-Jewish bigots.

A bigger issue is what all this has to do with gay pride. And whether taxpayers will want to continue to support a parade that may be evolving way past its original purpose.

Because of the furor over QuAIA, the gay community is on its way to a searing and intensive review of what and who should be involved in the pride parade.

What began years ago as an angry proclamation of the civil and human rights of homosexuals has until now been a joyful and inclusive festival, with politicians and corporations fuelled by both principle and self-interest clambering aboard.

"You've got to give us some time," Rev. Hawkes pleads. "The gay community needs to wrestle with what this parade is all about."

Better hurry. The forces who are licking their chops at a chance to discredit and dismantle not just the pride parade, but gay pride itself, aren't going to let this opportunity go by. And that really would be a tragedy. 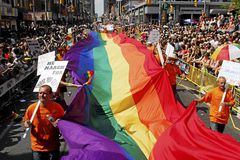 The straight dope on who’s gay: Who cares?
May 13, 2010
Group wins right to use its name in Pride Parade
June 24, 2010
Follow us on Twitter @globeandmail Opens in a new window
Report an error Editorial code of conduct
Due to technical reasons, we have temporarily removed commenting from our articles. We hope to have this fixed soon. Thank you for your patience. If you are looking to give feedback on our new site, please send it along to feedback@globeandmail.com. If you want to write a letter to the editor, please forward to letters@globeandmail.com.
Comments