Before Marc had his two daughters, we would admittedly both cringe in our airplane seats at the first screech of a bored toddler or, worse, the muffled kicking of school-aged feet at our backs. Now that we understand the trials of travelling with children (and of being a travelling child cooped up for hours in a metal cylinder) our instinct is to make a goofy gesture, or a joke to lighten the mood. At least for the first dozen times – and then all bets are off.

But before we get our grumpy face on, we know to be careful – few things are as touchy in North America today as reprimanding someone else's children. We've spent a lot of time in developing countries where a child is the whole community's responsibility, and we understand from stories our parents used to tell us that "it takes a village" was an ethic once practised here, too. But it seems like the current prevailing social code is that only a child's parent should parent their child.

Yet we've all been tempted to step in when we witness a preschooler throwing a public fit, a pint-sized bully tormenting his peers, or a teen up to no good. (Sometimes their parents aren't around to correct their behaviour, and other times they're standing by passively.) Parental instinct often dictates swooping in with our wagging finger, especially if our own child's safety or self-esteem is at stake. And what parent hasn't panicked when their child looks at them with a sense of injustice as they watch a peer break rules without repercussion?

Of course, you never really know what's going on in the mind or the life of that child, or their parent, and we now know, firsthand, that some days are tougher than others. Perhaps that's part of the problem – the less we know and interact with our neighbours, the less we're able to be a constructive adult influence in the lives of their children. After all, discipline rarely works in the absence of a respectful relationship with positive interaction as well.

All that said, what do you do when you witness other children deliberately leaving your son out of a playground game, the grade-schooler next door yelling at her little brother, or a gaggle of teens taunting the server in a restaurant? Is it worth risking confrontation when the child is quite likely to snap back that, "You're not my mother"? Is physical intervention allowed under any circumstance when even teachers are barred from touching their students? And how can we walk the line between pushover and neighbourhood nag without stepping on other parents' toes?

This week's question: How can we respectfully intervene to reprimand another's child?

Alyson Schafer, psychotherapist and author of Honey I Wrecked the Kids!

"You can't go wrong if you are respectful. I suggest the minimal response–remember you are simply dealing with one moment, not raising another's child. Frankly, most kids listen to just about any adult other than their own parent."

Alex Russell, co-author of Drop the Worry Ball: How to Parent in the Age of Entitlement

"The most important message is for parents whose child receives a reprimand from another adult: as long as your child really did something wrong, and as long as the other adult's reprimand was appropriate, they've just provided a natural consequence for your child that is effective and valuable. So swallow your anger (and pride) and quietly thank that adult later."

Joan Durrant, professor of family social sciences at the University of Manitoba

"First, ask why the child is behaving in that way–it's likely that the child needs to eat, rest or have someone help her calm herself. The 'village' should be there when the parent and child are stressed or worn out, to help maintain a rational perspective and resolve the problem constructively." Have your say: How do we equip our kids to deal with peer pressure?
September 3, 2014 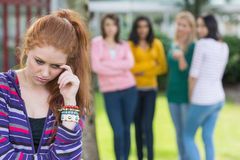 Have Your Say: How do we sidestep teaching gender stereotypes to our children?
August 20, 2014