People and organizations get involved for a variety of reasons, we found in speaking to five Free the Children and We Day participants. But they share a common passion. 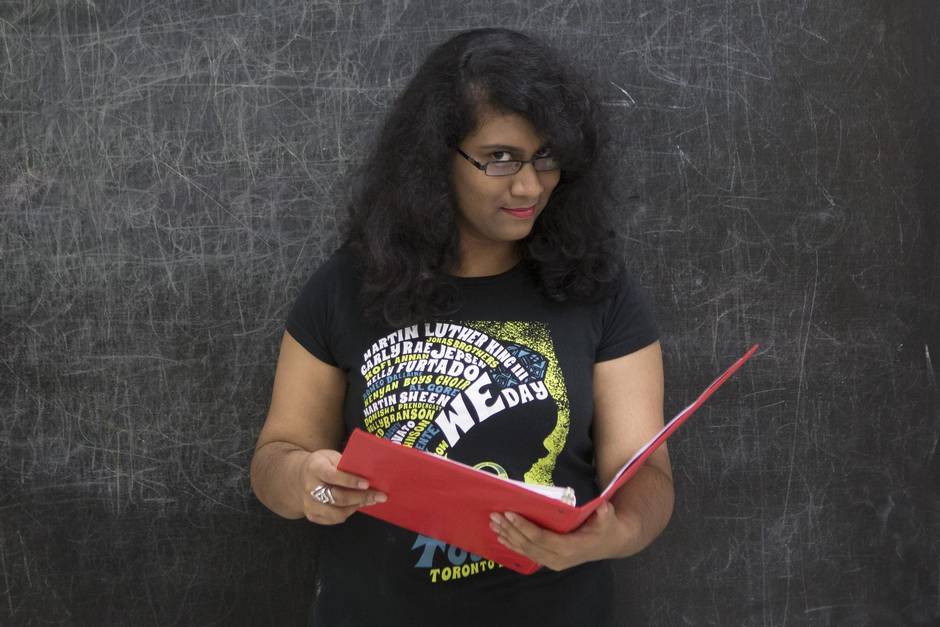 When Asha Navaneethan transferred to L’Amoreaux Collegiate Institute in Toronto, she was determined to get its Free The Children Club going again.

At her former schools, from the age of 12, she’d taken part in fundraisers after hearing double amputee and motivational speaker Spencer West talk “about how Craig [Kielburger] started the organization when he was 12.”

She’d collected, sorted and loaded cans for We Scare Hunger.

She stopped speaking for 24 hours for We Are Silent.

“It was hard but it was worth it,” she says. And the reward wasn’t just raising $150 for Free the Children. It was realizing “that a lot of people are silenced and that’s a lot harder than what we were doing.”

Ms. Navaneethan’s We Day experience when she was 14 was “amazing,” she says. “I will never forget that in my life because it was a whole day of things I was passionate about.”

Her goal now is to teach girls in India. In the meantime, Ms. Navaneethan has successfully restarted the Free the Children Club at L’Amoreaux. Her tips on how other young Canadians can give back:

1. Start volunteering and do what you can locally in your community before doing it globally.

2. Stay aware of what’s going on in the world. When you know what’s going on, you’re going to want to do something about it. If Mr. Kielburger hadn’t read the newspaper, Free the Children may not have existed.

3. Work hard at school. Education is important because then you can help educate others. 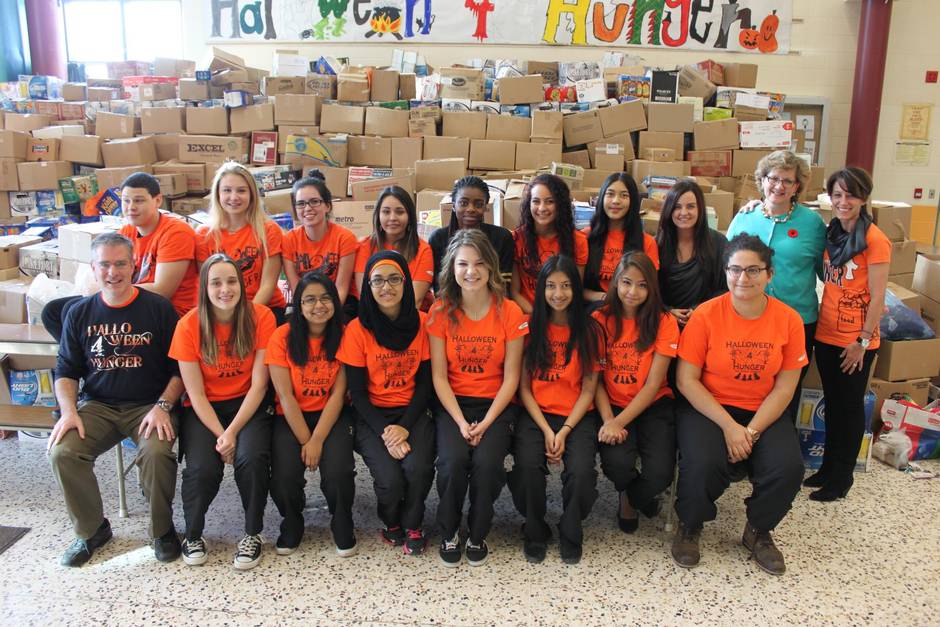 John Morelli, of St. Thomas More Catholic SS in Hamilton. The photos were taken on the day of the school’s We Scare Hunger food drive.

Appropriately for a teacher of religion, John Morelli is a modest man. “I don’t have to do very much,” he says about connecting his students at St. Thomas More Catholic Secondary School in Hamilton with the values of Free the Children and motivating them to help others.

“Teenagers have a very raw sense of justice,” he explains. “They’re very passionate and when there’s injustice, they respond.”
John Morrelli

Mr. Morelli recognized early on that Free the Children was an ideal channel for students’ passion.

The school raised funds to build a school in Nicaragua but much of the effort and energy has been directed to its own community. Mr. Morelli thinks that’s important for the students.

“They see neighbours in need, including children,” he says, “and they respond.”

An early initiative was the Halloween food drive. It has grown from 30 students participating to 800 students canvassing 23,000 homes and donating 81,000 pounds of food to grassroots food banks.

“It’s magic,” says Mr. Morelli. “The cafeteria is completely covered with food to be stacked. When the students see that, they get a great sense of accomplishment.”

He’s also come to realize that the We Scare Hunger food drive at Halloween is a terrific learning experience for students beyond their involvement with the community and the reward of helping others.

“They learn time management, event management, organizational skills, communication skills,” he says. “They could run it themselves.”

Mikayla Avonar, a 17-year-old student at the school, disagrees.

“The biggest thing is how he inspires us,” she says. “Without him, we couldn’t do it.”

Mr. Morelli’s inspiration comes from his faith, but attending We Day built on that. “Some of the speakers they’ve had!” he exclaims, mentioning Archbishop Desmond Tutu. “It’s very, very cool.” 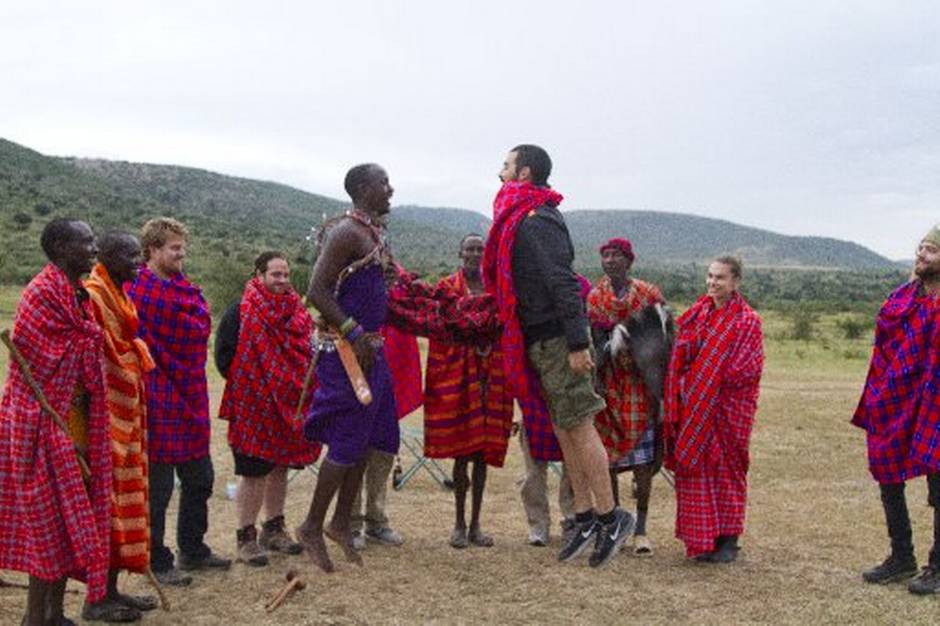 Ask 18-year-old Salome Maroko about Kisaruni, the high school she graduated from in Kenya’s Narok County, and she’ll mention the most important thing first.

“Kisaruni is a girls’ school,” she explains. “Kisaruni means a safe place for a girl child.”

The safety, support, education and encouragement Ms. Maroko experienced at the school founded by Free the Children in 2011 made it possible for her to be the first girl in Narok County’s history to earn an overall A grade on her exams. “Everyone in my community was so happy when they found out about my results!” she says. “I went to visit my primary school and the children ran toward me when they saw me coming.

“School has made me to be a role model to girls in my community.”

Her experience, she says, encourages other girls to become educated “and to achieve their desired change in the society.”

The community also took pride in Kisaruni’s first graduating class ranking No. 1 out of all 112 schools in Narok County in the Kenya certificate of secondary education (KCSE) exam.

Biology, mathematics, Swahili and English were her favourite courses. Other lessons were equally important.

“I learned leadership skills like confidence and public speaking, computer skills, how to interact with different people and how to be responsible,” she says.

The second oldest of six siblings – her older sister is married and the youngest is a preschooler – Ms. Maroko grew up in the rural community of Oloosiyoi. Her parents are subsistence farmers and Ms. Maroko worked during school holidays at neighbouring farms to earn money for school supplies, books and uniforms.

“My parents are very devoted to educating my siblings due to the change that Kisaruni has made in me,” Ms. Maroko says. “My siblings are working hard to emulate me.”

Ms. Maroko was offered a place at Kisaruni because she did so well at Oloosiyoi primary school. Her “humble background” and “willingness of my parents for me to get an education,” she says, “gave me the opportunity to be sponsored by Free the Children.”

Today, she’s a student at Kisii University in Kisii, Kenya, studying for a degree in biomedical science. She wants to be a doctor and to “go back to my community and share my knowledge.”

Kisaruni made it possible for her to be defined not by where she came from but where she is going.

“Being with able and caring education facilitators and friendly learners made Kisaruni a home to me. I came out as an empowered woman ready to make the world a better place.” 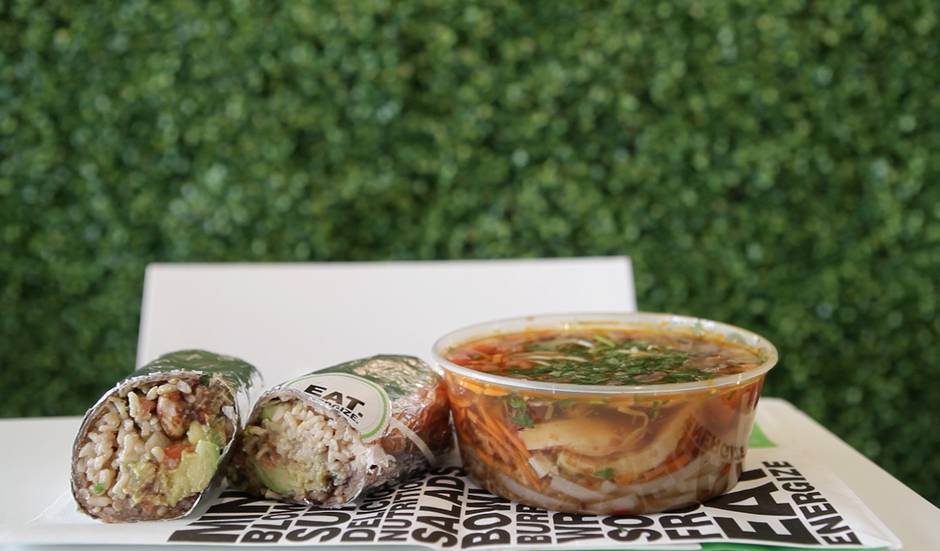 When Freshii founder Matthew Corrin sought the perfect fit for the philanthropy arm of his company, he and his team asked, “Which brands out there in the world touch multiple markets, target young people and millennials and have some brand alignment with how we can participate?”

Free the Children, he says, “is a fabulous fit for all of those. Freshii as a restaurant brand is largely surrounded by millennials – staff, customers and franchise partners in 15 countries.”

At 33, Mr. Corrin is the oldest member of the Toronto-based company’s management team.

Building vegetable gardens and school kitchens around the world with Free the Children fulfilled Mr. Corrin’s goals for his company.

“Freshii is about nutrition,” he says, “and now Freshii is supplying almost a million meals a year in developing countries through our school gardens and kitchens.”

Free the Children is also a perfect fit for Freshii franchise partners. “It’s our job to give them tools to use in local markets – including tools for philanthropy.”

1. Make it part of the business early on and consider it a full-time job, not an afterthought.

2. Pick your cause thoughtfully. Find one that ties in with your brand and that your team can be passionate about.

3. Go deep with one cause as opposed to “sprinkling” too many to have the most impact. 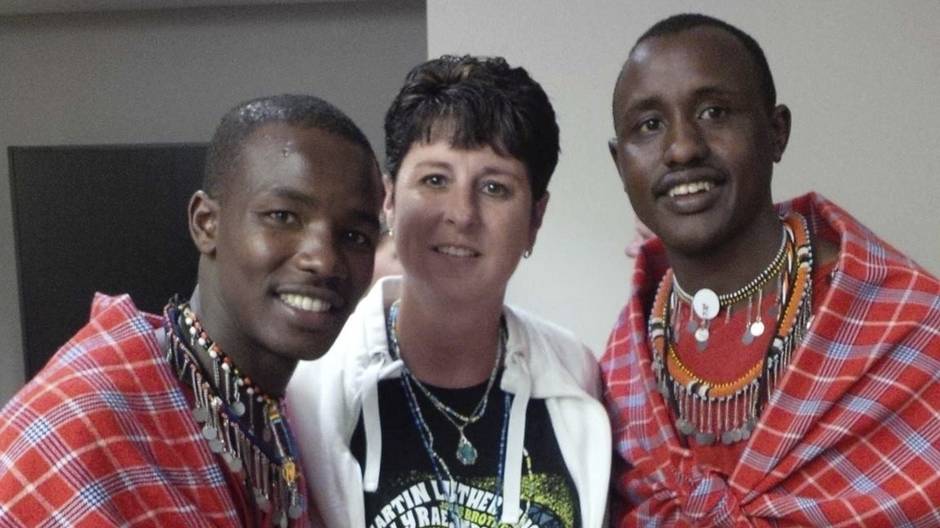 Ann Martell never thought her daughter Montana would want to fly to Africa. “She was always an anxious child, didn’t sleep well, didn’t like to be away from family.”

But after hearing double amputee and motivational speaker Spencer West at her school in 2012, Montana wanted to go to Africa with Free the Children.

“We kept saying no,” Ann recalls. “But I said, let’s go to We Day and see what it’s all about. At the end of that day, my husband and I looked at each other and said, how can we not let her go? That led to me helping with the planning and getting sponsorship.”

Montana, now a 19-year-old student at the University of Guelph studying social justice, went to Kenya in 2013 and to Ghana in 2014.

And together, Ann and Montana have gone to seven We Days as volunteers.

“It was fulfilling to take on something we both feel really passionate about,” says Ann.

“Working backstage is incredible – seeing all the work that goes into it culminate in that day: hundreds of people doing training, folding T-shirts, filling bags. Everybody is working together, nobody loses their cool. It’s never-ending enthusiasm.”

A school psychologist with the Bluewater District School Board in western Ontario, Ann especially enjoys wrangling the talent.

At a We Day in Illinois recently, actor and singer “Tyrese Gibson talked about how his teacher was his mentor. He didn’t know that his teacher was in the building. I spent the day hiding him. The whole thing, taking him to surprise Tyrese, was just amazing.”

Ann and Montana are helping to change the world with Free the Children but, she says, “It’s changed us for sure.”