Technology and science have the power to transform lives – to take humankind where no one has gone before, effect change, and better the Earth and beyond.

But the current cohort of young people, so far the most technologically integrated generation, have the potential to use technology for good or for harm.

As cities in North America and Britain prepare to play host to We Day – one of the world's largest forums for youth empowerment – global leaders and role models, such as Canadian space robotics expert and motivational speaker Natalie Panek, are focused on helping get the message across that "it's cool to care."

Panek and others aim to help young people, and especially women, embrace and channel technology for good.

"So much positive change can come from harnessing innovation and technology through the imagination of youth – it can open their minds, show them the power of what they can achieve to work toward a positive future," says Panek, a 29-year-old aerospace engineer at MDA Robotics and Automation in Brampton, Ont., a unit of MacDonald Dettwiler and Associates Ltd., of Canadarm fame.

Panek will bring her message of technological empowerment – among the many themes that will be addressed by motivational speakers – to tens of thousands of youth at Toronto's Air Canada Centre on Oct. 2 for the worldwide launch of We Day.

She is a University of Calgary graduate whose work helping build robotic arms that repair and refuel satellites is part of a sustainable approach to technology.

"We have all these satellites orbiting the Earth we rely on in our daily lives, and when they break down, they remain up there as space junk usually – instead of letting these satellites become space junk, we would refuel and repair them to be reused," Panek says.

"The idea is to extend our care of the Earth into orbit and beyond to be more sustainable and responsible about how we explore," says Panek, whose educational tools include the website thePanekRoom.com, a personal blog and a resources directory for women in science, engineering and technology.

The middle of three children, she was weaned on nature – her family got her into camping, hunting and hiking at a young age, kickstarting her "love of exploration and curiosity of the world around us" and her dream of becoming an astronaut.

One of her early role models was a female high-school physics teacher. Panek was one of just two female students in her class of about 35. "She challenged and motivated us and inspired us to believe you can be an intelligent woman and be challenging," Panek says.

As a University of Calgary undergrad, she helped build and drive a solar-powered car across North America as part of a competition with other schools. She interned twice at NASA – at the Goddard Spaceflight Center in Washington in 2008 and the Ames Research Center in 2009 – and also has her private pilot's licence.

"I kind of just fell into speaking publicly. I spoke at a youth conference in Toronto in 2012, stressing the message about empowering women in technology … and the feedback was great," Panek says.

"The idea was to have them listen to a female speaker who had driven a solar-powered car across North America, and had their pilot's licence and worked on robotics at NASA, and to visually see someone in that position at an age somewhat close to them and working on their career.

For all its awe-inspiring impact, technology's potential hazards, such as cyberbullying and cybercrimes, also need to be addressed. One of the best ways to do that is through education, say experts.

Although not involved in We Day, University of Toronto touch technology researcher Rhonda McEwen and Steve Thurbide, manager of science education at the Discovery Centre in Halifax, are among those working to shape young people's positive use of technology.

McEwen's lectures and research focus on technologies such as computer tablets and cellphones and how they can be used as helpful tools, for instance for schoolchildren with autism, or in combatting cyberbullying, cybercrimes and youth isolation.

No matter how tech savvy a child seems, "they need to be taught about how to use technology," McEwen warns.

"There's a pervasive misunderstanding that they are digital natives, that they are natively better at technology because they're younger and have come up with it as their life was forming, and they were intuitively born for this technology," says McEwen, a professor at the Institute of Communication, Culture, Information and Technology at U of T's Mississauga campus, and at the downtown faculty of information.

"A lot of my work shows that's not necessarily true at all, and they need to be taught what happens to data … and literacy in the sense of, 'How do I question what I'm looking at and taking in, how do I understand credibility of information, what happens to me online in terms of my digital presence?'

McEwen says youth are more inclined to use technology positively if they're taught the science behind it – such as the potential health dangers of the electromagnetic frequencies on cellphones. "It's about getting as much information to them as possible, so they can make better choices."

Thurbide, of the Discovery Centre, a science centre with exhibits, live science shows, workshops and community outreach, stresses the importance of getting young people involved in fun hands-on projects, and even making them a family affair.

For example, the Discovery Centre's programs have included a series of Digital Discovery Camps this year where 10 to 15 year olds learned about robotics using Lego NXT technology and new Lego EV3 models.

"We had a couple of campers, and, all joking aside, they were probably on a level with the technology background and experience of our counsellors," says Thurbide.

"We were absolutely amazed with the kids who had previous experience using the next wave of robotics, and a lot of it starts at home – parents being active with their kids' lives and not just giving them a cellphone or computer, and saying, 'Take this and go into a corner.'" 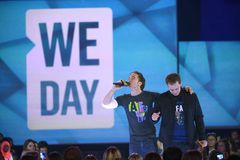