Earlier this year, British chef Peter Gordon decried the popularity of local food in an article he wrote for his country's Independent newspaper, complaining that a focus on where food comes from has led to "culinary xenophobia."

But on this side of the Atlantic, exactly the opposite is taking place. In Canadian restaurants, chefs are matching food traditions from other countries with ingredients from nearby producers to create a new made-in-Canada global-local cuisine.

In Vancouver, chef Vikram Vij blends recipes from India with vegetables and meats raised nearby to create dishes such as a fish curry traditionally made with pompfret that showcases local mussels and sturgeon instead. "Rather than having white fish flown in from Bombay, we used fish from here," Mr. Vij says. "We are creating something new."

The menu at Vancouver's Maenam, a Thai restaurant, includes dishes such as Hot and Sour Sloping Hill Pork Soup, named after the nearby farm where the free-range, heritage pork is raised.

Toronto chef Johan Maes makes Belgian waffles at his restaurant Le Petit Déjeuner the same way it's done in the city of Liège, but with red fife wheat, a Canadian heritage strain.

And at Toronto's Pizzeria Libretto, where the pizza is certified by the Italian government to be in the true Neapolitan style, they have traded tomatoes for beets in the colder months to make their Caprese salad.

"We are Italian, specifically Neapolitan. It doesn't mean we have to import ingredients from the globe," says proprietor Max Rimaldi. "Beets are available right now and they have a sweetness to them, like tomatoes do."

Swapping traditional ingredients for local ones is faithful to the philosophy of Italian cuisine of using what you have around you, Mr. Rimaldi says.

"It's a micro-cuisine," he explains. "One town will make a dish with different ingredients from another five minutes away."

So rather than offering the typical North American-style bruschetta, toasted bread rubbed with garlic and topped with chopped tomatoes found on menus here 12 months a year, this spring Pizzeria Libretto offered bruschetta made with fiddleheads instead.

The reason so many chefs are drawn to ingredients raised nearby, often by smaller-scale farmers who practise sustainable agriculture, is taste, chefs say.

"Local ingredients are always better," Mr. Pohorelic says. "Food made to eat locally tastes better than food made to travel."

In the case of the Mexican restaurant Milagro in Toronto, operations manager Andrés Márquez could source higher-quality dairy products in Ontario than he could import from Mexico. He now buys the cultured cream, crema la vaquita, that they use in many of their dishes, as well as cheeses such as queso fresco from Local Dairy Products in Ingersoll. The dairy, which also makes paneer, an Indian cheese, uses more than 4,000 litres of fresh milk a day from nearby farms rather than imported products.

"We like knowing we are supporting local farmers, but the taste is incomparable," Mr. Márquez says.

When Eduardo Lee opened the Arepa Café on Queen Street West, he wanted to bring typical Venezuelan cuisine to downtown Toronto. He went back to his hometown, Caracas, to study how to make authentic arepas - English-muffin-sized corn cakes stuffed with fillings such as cheese or beans.

But back in Canada, he learned that corn here is different than the corn grown in Venezuela, and this meant fiddling with tradition.

"The corn here is more watery and sweeter," he says. "In Venezuela, we add sugar. But here we don't have to."

This past fall, Mr. Lee purchased several cases of corn that he processed and then froze so he could continue using local ingredients well into the winter. As a bonus, he saved money.

"The funny part is that it is cheaper. It's less expensive than buying things that are coming from far away," he says. A case of corn he purchased from a farmer at harvest season cost $19, as opposed to $31 for a case of fresh American corn. Next, he hopes to find someone to produce the corn flour he now imports from South America.

"It feels pretty amazing," Mr. Lee says. "The statement we are making here, working to provide food from a different culture with products from here - it's like, wow." 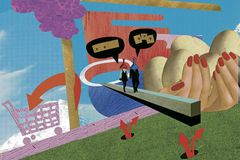 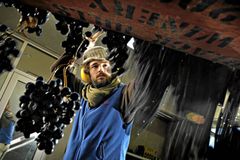