One of the first images you see after entering Grace Kelly: Style Icon, a new exhibition at the Victoria and Albert Museum in London, is a photo of her in a stunning pink ball gown, captured halfway up the marble staircase of Monaco's Princess Palace, almost as if in flight. She is ethereally beautiful, the stuff of little girls' dreams. And yet the look on her face is slightly startled, as if the clock has just struck midnight and she has realized she's missing a shoe.

It takes only a minute of wandering around the show, which brings together the highlights of Kelly's wardrobe from Hollywood and Monaco, to see why her image has endured (28 years after her death, she is on the cover of both Vanity Fair and Intelligent Life magazines). Each carefully chosen dress, glove and handbag suggests elegance, control, restraint - all the supposed tools of repression that are in fact the tools of seduction, lost in this era of casual living.

The first section is devoted to Kelly's brief but accomplished career in Hollywood and showcases the extraordinary satin dress that Edith Head designed for her to wear when she collected her Oscar for The Country Girl in 1955. (Some scoffed that she won only because the role was so unglamorous. Take note, Charlize Theron: Uglying up to win is not a new trend.) Across the aisle is a black chiffon evening dress that Kelly wore in Rear Window, but not, alas, the flouncy negligee-in-a-case that nearly brought Jimmy Stewart's housebound photographer to his feet despite his broken leg.

When Paris Match arranged a photo shoot with Kelly and Prince Rainier of Monaco - a fated meeting - a power outage in the actress's hotel meant that she couldn't iron any of her gowns and was forced to wear a floral frock made from a McCall's sewing pattern. For Rainier, it was, clearly, the filling that mattered, not the wrapping.

That McCall's dress - surprisingly lovely, but that's what good tailoring will do for you - is on display next to a gorgeous cream shirtwaist number that Kelly wore on the day her engagement was announced. Designed by the American design house Branell, it is the favourite dress of the Philadelphia Museum of Art's Kristina Haugland, who wrote the exhibition catalogue. Branell reissued the outfit to capitalize on the frenzy of publicity following the engagement, Haugland says, "and they called it the 'To Catch a Prince' dress."

Once the prince was caught and Kelly became Her Serene Highness and moved to the land of casinos and fast cars, her outfits caught a whiff of Mediterranean madness. One of the most stunning from this period is "la Bayadere," a chiffon evening dress patterned in glowing chevrons that looks like something out of an acid dream. (On second thought, maybe it was just the 1960s vibe that was contagious.)

The dress, by Marc Bohan for Christian Dior, seems more Cher than Grace, but it was one of the princess's favourites. At that time, she was also wearing the designs of Givenchy and Yves St. Laurent (one of his Mondrian-esque "crusader" dresses is on display).

But even if Kelly loosened up a bit, the trademark tailoring and precision are always there: As Haugland says, this is a woman who spent an awful lot of time practising her posture in her youth.

Unfortunately, the princess's wedding dress, which is too fragile to travel, is not on display, but Haugland says Kelly, not normally a dieter, lost so much weight because of prenuptial nerves that the gown has a 21-inch waist. (The pretty, simple lace dress she wore to her civil wedding ceremony is here.)

And yes, accessories freaks, there is plenty for you as well, including a caramel-coloured Kelly bag covered in scuffs of regal origin, enough turbans and sunhats and gloves to make a vintage fan weep and a small selection of jewellery, from a diamond-and-sapphire daisy brooch she wore on a trip to Ottawa in 1967 to one solitary tiara.

After all, every princess's story requires a tiara. And Grace is the ultimate princess - beautiful, regal and, thanks to a cruel twist of fate and a bad bend of road, forever frozen in time.

Grace Kelly: Style Icon is at the Victoria and Albert Museum in London until Sept. 26. Visit www.vam.ac.uk for details. 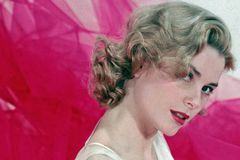