Adding a serving of yogurt to your daily diet may do more than help keep your bones strong. A new study suggests it could also lower the risk of heart attack and stroke.

We've long been advised to limit our intake of cholesterol and saturated fat from dairy products to cut heart-disease risk. Yet several studies have found that regular consumption of dairy - in particular fermented milk products - benefit the heart.

Fermented milk products such as yogurt and kefir contain friendly probiotic bacteria that may help guard against disease.

A new study published online in the July issue of the American Journal of Clinical Nutrition found that women who ate at least 100 grams (slightly less than half a cup) of yogurt every day had significantly less plaque build-up on the walls of their carotid arteries.

The carotid arteries are the major blood vessels supplying the brain with blood. The thicker the plaque in them, the less space there is for blood to travel through. The thickness of the two inner layers of the carotid artery (called carotid artery intima-media thickness) has been shown to predict the risk of stroke, heart attack and death from heart disease.

In the study, researchers measured the dairy consumption of 1,080 Australian women over the age of 70. Carotid artery thickness was measured by ultrasound three years later.

High consumption of yogurt - but not milk or cheese - was associated with lower carotid artery thickness and higher HDL (good) cholesterol levels. Women who ate 100 to 200 grams (half to one cup) of yogurt each day had significantly better test results than their peers whose daily diets provided less than 100 grams.

This finding remained strong even after accounting for other cardiovascular risk factors such as body mass index, physical activity, smoking, diabetes, calorie intake, fish intake and so on.

The results suggest - but don't prove - that increasing yogurt consumption may prevent thickening of the carotid arteries and, ultimately, guard against heart disease and stroke.

There are other reasons to add yogurt to your diet, providing, of course, you're not allergic to it. Yogurt's active bacterial cultures can help stimulate the immune system, reduce symptoms of antibiotic-associated diarrhea and improve the absorption of lactose in people with mild to moderate lactose intolerance.

(Probiotic bacteria break down the lactose in milk.)

The healthiest yogurt has no refined sugar added. A 175-gram tub of plain low-fat yogurt packs 9 grams of protein and 320 milligrams of calcium, as well as a fair amount of riboflavin (B2), vitamin B12, zinc and potassium. All for only 100 calories.

Not all yogurts are created equal. You need to read labels to know if you're buying a really healthy yogurt.

To reduce your intake of cholesterol-raising saturated fat, choose a yogurt with 1 per cent milk fat (MF) or less.

If you don't eat your yogurt plain, you need to consider the amount of sugar in fruit-bottom and flavoured yogurts.

The sugar numbers on nutrition labels include added sugars and naturally occurring sugars such as lactose. A 175-gram serving typically contains 12 to 14 grams of lactose, and sweetened yogurts have 2 to 4 teaspoons of added sugars. That extra sugar also reduces the protein content.

Choose a yogurt with no more than 20 grams of sugar per 175-gram serving, including the 12 to 14 grams of natural milk sugars.

Smaller tubs will have lower cut-offs. For example, if comparing 100-gram tubs, choose a product with no more than 12 grams of sugar.

Unlike many unhealthy foods that are growing in size, tubs of yogurt are getting smaller. That means they don't supply as much calcium as you might think.

The amount of calcium is expressed as a percentage of daily value (% DV) on the nutrition label. The % DV is based on the average recommended daily intake for calcium (1,100 milligrams).

Look for at least 20 per cent DV for calcium per 175-gram serving. That means you're getting a minimum of 220 milligrams of calcium.

Look for at least 12 per cent DV for calcium per 100-gram serving (132 milligrams of calcium). And remember, you'll need to eat more than a tiny tub to get a milk serving's worth of calcium. You're better off buying a large tub of yogurt and portioning out a 175-gram serving.

If you want creamy, rich-tasting yogurt that's higher in protein, try Greek-style yogurt. Once the milk has been heated and cultured, it's strained in a filter to remove the whey, the liquid part of milk. The result is a thick yogurt with twice as much protein as regular yogurt. One serving (175 grams) of plain Greek yogurt has 18 to 21 grams of protein. (The zero-fat variety contains 120 calories.) 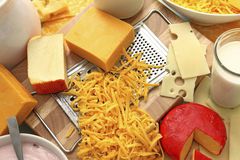 The DASH diet may cut your risk of heart failure in half
May 13, 2009
Follow Leslie Beck on Twitter @lesliebeckrd
Report an error Editorial code of conduct
Due to technical reasons, we have temporarily removed commenting from our articles. We hope to have this fixed soon. Thank you for your patience. If you are looking to give feedback on our new site, please send it along to feedback@globeandmail.com. If you want to write a letter to the editor, please forward to letters@globeandmail.com.
Comments