Doctors are increasingly prescribing a class of drugs for low back pain as they look for alternatives to addictive opioids, despite evidence the drugs are largely ineffective and carry substantial risks, according to new research.

The study, published Tuesday in the Canadian Medical Association Journal, reviewed existing evidence and found there is no solid proof to show gabapentinoids such as pregabalin or gabapentin effectively treat low back pain. In addition, the drugs can cause potentially serious side effects, such as drowsiness and sedation, which can lead to car crashes, falls among the elderly, respiratory depression and death.

“In light of the evidence, we should proceed with caution with using gabapentinoids for low back pain ... and learn from the lessons of the opioid crisis,” Christine Lin, lead author and associate professor at the University of Sydney School of Public Health, said in an e-mail. “We do not want to head to a gabapentinoid crisis in the near future.”

But reports also suggested the drugs could provide pain relief to a wider range of people dealing with chronic pain and doctors began prescribing them more, even though they weren’t approved for those uses, a practice known as off-label prescribing. In the past few years, prescriptions for the drugs have skyrocketed, coinciding with mounting public concern over the high rates of opioid addiction, dependence and misuse in Canada.

The trend reflects the pressure many doctors feel to avoid or reduce the use of opioids while providing something to help patients in pain, said David Juurlink, head of clinical pharmacology and toxicology at Toronto’s Sunnybrook Health Sciences Centre, who was not involved with the study.

And considering the risks of the drugs, namely drowsiness, dizziness and sedation, the prescribing numbers are a concern, Dr. Juurlink said.

In 2013, there were 3.4 million prescriptions for pregabalin dispensed from Canadian pharmacies, according to figures provided by health-data company, IQVIA Canadian CompuScript Audi, and obtained by The Globe and Mail. By 2017, that number had jumped to 6.1 million. There were 3.1 million prescriptions dispensed for gabapentin in 2013. In 2017, that rose to 4.7 million.

Another big part of the problem, Dr. Juurlink said, is that many people taking gabapentinoids are also taking opioids, which dramatically increases the risks associated with the drugs.

Dr. Juurlink and his colleagues published a study last year that found patients taking opioids and gabapentinoids were 50 per cent more likely to die from opioid-related causes. Nearly one in 10 people are taking both drugs at the same time, according to the study. About half of people taking gabapentin had also been prescribed an opioid, the study found.

In Ontario last year, 15 cases of opioid-related deaths were linked to gabapentin, less than two per cent of the total, chief coroner Dirk Huyer said in an interview. In 11 of the 15 cases, gabapentin was found to be one of the direct causes of death.

Pfizer Canada, which sells gabapentin and pregabalin, said in an e-mail statement that it stands behind the safety of the drugs. Spokeswoman Christina Antoniou wrote that the drugs are not approved to treat low back pain and that the company doesn’t comment on off-label prescribing.

In 2016, Health Canada conducted a safety review of gabapentin and concluded it is linked to the risk of serious breathing problems.

Health Canada spokesman Eric Morrissette said in an e-mail that the department will review the new CMAJ study “and will take any necessary actions.”

Gabapentinoids are not classified as narcotics and the usage is not being monitored by most provinces in the same manner as opioids. 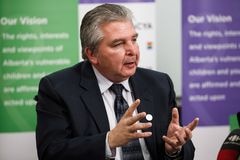