I first tried hok skis, a hybrid of cross-country skis and snowshoes, last February at Camp de Base Gaspésie, a charming cabin getaway in Quebec just south of Gaspé.

“Guests just love them and wonder why they ever bought snowshoes,” Pascale Deschamps tells me. She and co-owner Jean-François Tapp rent them out to overnight and day visitors.

“What they find really great about them is that it’s fluid, so you can really go in the snow well with less effort. You can go even further and do longer trails.”

Hok skis are the creation of American Nils Larsen and Canadian Francois Sylvain, who drew inspiration from the traditional gear used by Indigenous skiers in the Chinese Altai Mountains. Wider and shorter than traditional skis, the hoks feature a permanent faux-fur skin, which provides extra grip for climbing. Shushing downhill, walking uphill, gliding across flat surfaces – it’s all possible.

In basic terms, this is cross-country skiing for idiots.

At Camp de Base Gaspésie, guests of all ages can ski across pristine snowy terrain overlooking the beautiful frozen Gulf of St. Lawrence – or even venture a try in nearby Forillon National Park if they’re feeling up to it.

Alas, Hamilton, where I live, is far from backcountry. Never did I feel this more than mid-February, when the COVID-19 blues finally hit me. I wasn’t eating well, I had stopped exercising and I was spending far too many hours scrolling through Instagram on my sofa. I needed to change my mindset and I knew from past experience that meant getting outside and into nature. But it was so freaking cold. And although spring was drawing tantalizing close, let’s be honest: It doesn’t truly arrive until April.

So, after a year of wanting a pair of hoks, I finally put in my order. They would help improve my mood by getting me off my butt and embracing the snow, I reasoned, even if my only motivation to use them ended up being a reluctance to waste $450. But now the question was, where would I go?

“I have a very generous definition of nature,” says Florence Williams, author of The Nature Fix: Why Nature Makes us Happier, Healthier and More Creative.

The writer, whose book looks at the science behind the positive effects being outdoors has on the brain, had to adapt her mindset after moving to Washington from Boulder, Colo. Now she finds beauty in little things on even short strolls near her home. It’s an idea she promotes as an ambassador of the Arc’teryx Outer Peace initiative, a new $1-million commitment from the Vancouver company toward outdoor accessibility and nature conservancy that aims to address structural inequalities and barriers.

“I think it’s a great exercise to just ask yourself, ‘What can I see today on this walk? I want to find something beautiful,’ Williams says. “If you don’t ask yourself, you don’t necessarily notice it. And sometimes it’s just like an arrangement of leaves on the sidewalk. And then once you see it, actually stop for a minute and take a few deep breaths. It seems a little bit hokey, but it’s actually very powerful.”

As it turned out, part of the country-spanning Great Trail of Canada runs just a couple of blocks over from my house. It seemed the perfect blend of nature and urban to put her approach into action, and my new gear to the test.

So as the snow fell heavily one morning I headed out to the trail. As I had remembered, the hoks were easy to put on and within a couple of minutes I was gliding along. I loved the way the skis disappeared under the sparkling powder; I climbed up small hills and slid back down. I felt like the whole forest was mine to conquer. But I also made a point to stop frequently and take it all in: the sound of cardinals chirping, the snowflakes dancing in sunbeams, the distinct smell of a crisp winter’s day.

Back at my home office an hour later, I felt like I had accomplished something significant. My mood was far more positive and upbeat than it had been in some time.

I kept at it, challenging myself to at least 20 minutes of physical activity outdoors for seven days straight, hoping to experience the “transformative and healing power,” promoted through the Outer Peace initiative. And over the week, I could feel optimism begin to replace the dread.

The hok skis were a success. But, ultimately, the solution was nature itself.

“We know any exercise we can do in a natural environment – it could be anything, it could be walking – can help toward reducing a negative emotion,” says Dr. Katy Kamkar, clinical psychologist at the Centre for Addiction and Mental Health in Toronto.

Of course, skiing or walking is not going to solve all mental health problems. A recent survey by CAMH shows that at least 20 per cent of Canadians are experiencing increased depression, anxiety or loneliness during the pandemic. Anyone feeling worsening symptoms or who is having difficulty functioning day to day, should seek professional help, Dr. Kamkar says.

But it’s nice to know that even a short amount of time outdoors can be beneficial. “Sometimes even 20 minutes might be overwhelming to think about,” she says. “I always say to everyone, anything you want to do above zero counts. So if you feel, ‘You know what, let me do just five minutes,’ kudos to you. That’s a success. Checkmark.”

I’ll have to remind myself of that when the sunny snowy days give way to grey rainy skies.

Editor’s note: A previous version of this story incorrectly identified the Quebec location where the writer first tried hok skis. The pandemic is worsening negative thought patterns, but with mindfulness we can help the mind help itself
March 1, 2021 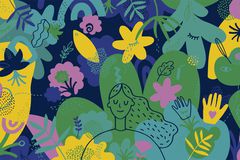 Stress is the biggest epidemic of our time, says Deepak Chopra, and he’s trying to make it easier for everyone to quiet their minds
Subscriber content
March 1, 2021 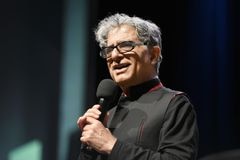