Pretty much everyone agrees that modern kids need to get more exercise. A reasonable benchmark for ages five and up, according to health experts, is 60 minutes of physical activity a day. But there’s a piece missing from that prescription.

“The next question – and it’s an important question – is 60 minutes of what?” says Avery Faigenbaum, a professor of health and exercise science at the College of New Jersey. “Most of the guidelines are ‘just accumulate your 60 minutes and it doesn’t matter what you do.’”

At a joint conference of the American College of Sports Medicine and the National Strength and Conditioning Association in Hartford, Conn., last month, Faigenbaum laid out the case in favour of strength training for kids. Simply telling kids to get out and play more sounds nice, he said, but clearly isn’t doing the job.

Indeed, study after study has found that strength and fitness levels are declining among children from generation to generation. Last November, for example, Canada’s 2018 Report Card on Physical Activity for Children and Youth revealed that only 35 per cent of kids between the ages of 5 and 17 were meeting that 60-minute goal for daily moderate or vigorous activity.

It’s easy to blame iPads and video games for the deficit, but Faigenbaum thinks there is a deeper underlying factor: A generation of sedentary children is failing to acquire the minimum strength and basic movement skills needed to enjoy sports and outdoor activities as they get older.

“I think there’s a strength barrier, because prerequisite strength levels are needed to move,” he says. “If you don’t believe me, watch a six-year-old kick a soccer ball.”

This problem, he adds, is distinct from the issue of obesity. Many of the children he works with have normal, healthy weights but are simply weak – they’re like “little wet noodles,” unable to perform basic movements in introductory gymnastics or martial-arts classes. That makes them far more likely to join the flood of children who quit sports before they’re 10, and sets them on a path toward life-long inactivity.

Proposing formal strength training for children is, admittedly, a tough sell. Many people still have concerns about whether it’s safe or effective, despite position stands from the Canadian Society for Exercise Physiology and other organizations concluding that resistance training for children, with appropriate guidance and supervision, “can be relatively safe and improve overall health.”

“Tell kids to play hopscotch and nobody worries,” Faigenbaum says. “But call it a single-leg plyometric and everybody loses their mind.”

For kids as young as 7 or 8, the guidelines suggest resistance training a couple of times a week, with one to two sets of eight to 15 repetitions per exercise, with appropriate supervision and loads less than 60 per cent of one-rep maximum. Initial exercises might include body-weight lifts such as push-ups and medicine-ball games, and learning proper form for more advanced exercises such as squats and lunges using a broomstick instead of a barbell.

For younger kids, Faigenbaum says, the training should be game-like, replicating the vigorous running, hopping, skipping, lifting and climbing that free outdoor play – and, for that matter, the activities of daily life – used to involve for previous generations, before the spread of labour-saving devices and safety-proofed playgrounds.

All of which raises an important question: Why not just do more to encourage kids to play like that?

“I don’t think we need to be afraid of kids doing things that involve strength,” says Mark Tremblay, the director of Healthy Active Living and Obesity Research at the Children’s Hospital of Eastern Ontario in Ottawa and a co-author of the 2018 Report Card on Physical Activity.

But introducing words such as “structured” and “training” for six-year-olds makes Tremblay hesitant. “Kids should be free to play without borders, doing things like climbing trees that involve strength and risk – and doing it of their own accord,” he says.

There’s probably no one-size-fits-all solution for all kids. Some may leap at the opportunity to try formal resistance training; others may thrive in semi-structured environments such as swimming lessons and gymnastics; and others might get everything they need from parks, forests and playgrounds. The important thing, Faigenbaum says, is to make sure that they’re learning to move – and strong enough to move well. 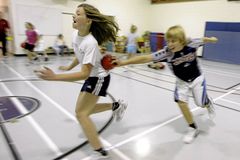