Here’s one familiar pre-COVID-19 scene that runners won’t miss this summer: the long, tense lineup for the portable toilets before the start of a mass-participation race.

Of course, that doesn’t mean no one is currently suffering from runner’s trots or other exercise-linked gastrointestinal hassles. If anything, the reported surge in social-distance-friendly workouts such as running and cycling is reminding a whole new cohort that eating and exercising don’t always mix well.

But the solution obviously isn’t simply to avoid eating. As Patrick Wilson points out in his new book The Athlete’s Gut: The Inside Science of Digestion, Nutrition, and Stomach Distress (VeloPress, 2020), sometimes avoiding food for too long before exercise can raise your risk of mid-workout nausea as much as scarfing a meal right before you warm up.

The path to a happy gut is nuanced and context specific. Wilson, a physiologist and dietitian who heads the Human Performance Laboratory at Old Dominion University in Virginia, lays out the causes and possible solutions for a long list of symptoms ranging from mere bloating and reflux to the uncontrollable urge to soil your pants. Here are three key points to consider.

IT’S NOT JUST YOU

There are several reasons for this, but perhaps the most important is that your muscles demand oxygen-rich blood during exercise, which diverts blood away from the gut. The oxygen-starved digestive organs then struggle to deal with whatever partially digested food remains there.

For that reason, hard exercise is a more potent trigger than easy exercise. Activities with lots of jostling, such as running and horseback riding, increase your risk. Women report more gut problems than men, for reasons that aren’t understood. The bottom line: Most symptoms have more than one contributing factor, which means you’ll need to experiment with several possible countermeasures.

THE GUT IS TRAINABLE

It’s clear that what you eat and when has a significant impact on any gut symptoms you experience during exercise. But reassuringly – or, depending on your perspective, disappointingly – Wilson does not lay down any hard-and-fast universal rules on what you’re allowed to eat and drink.

Is it the lactose that’s messing up your workout? For a few people, yes; for most people, no. Same goes for the gluten, the fructose, the fibre, the too-big or too-small meals, the underdrinking or overdrinking. Only you can figure out what your stomach can tolerate.

But once you figure it out, you can change it. Just like your muscles, your digestive tract adapts to the stresses you put on it. If you carb load, your intestine will develop more transporters to ferry those carbohydrates into your bloodstream more quickly. If you practise drinking on the run, your stomach will adapt to feel less full with a bellyful of liquid.

Here’s a great Canadian contribution to our gastrointestinal knowledge: After a Quebec fur trader named Alexis St. Martin was accidentally shot with a musket in 1822, he healed with a hole that allowed doctors to peer directly into his stomach. Among the many insights gleaned from this remarkable coureur de bois: the pale lining of his digestive tract flushed red in response to “fear, anger, or whatever distresses or disturbs the nervous system.”

In other words, there’s a reason that prerace toilet line is so long: Stress and anxiety kick the autonomic nervous system into overdrive, altering blood flow to the gut, slowing the passage of food and drink through your stomach, and activating your colon muscles.

And if none of these options work, Wilson has one final remedy up his sleeve: time. Both age and training experience are associated with fewer gut symptoms. So if you’ve laced up the running shoes for the first time recently and are struggling with your bowels, take heart: This too, if you’ll pardon the pun, will pass.

Exercise keeps our brains healthy – but does cognitive decline lead to physical decline?
May 24, 2020 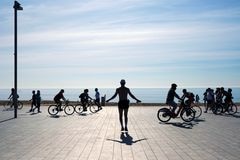