The day Clair called the RCMP on her husband, David Kirkpatrick, was one of the hardest in their marriage. At just 66, Clair had been diagnosed with Alzheimer’s disease. She’d grown wary around Kirkpatrick, her recognition of him coming and going. That particular day, Clair mistook her husband for an intruder in the home and called police.

Kirkpatrick, a retired Vancouver psychiatrist, shows the disintegration of a marriage at close range in his new book, Neither Married Nor Single: When Your Partner Has Alzheimer’s or Other Dementia.

This is a disease that is often hardest on the family, experts say. Perhaps no one feels the pain more acutely than spouses. As they transform into caregivers, husbands and wives face complete uncertainty in their radically altered marriages.

Kirkpatrick examines how dementia interrupts couples’ intimate lives and their “mutuality” – all the common ground they used to share. “How do you say goodbye to someone who’s still here in body?” Kirkpatrick writes.

Interviewing husbands and wives in his dementia support groups, Kirkpatrick realized how little they all had to go on. Physicians don’t ask the spouses of dementia sufferers how their marriages are faring. With the exception of two films – 2014’s Still Alice, starring Julianne Moore, and 2006’s Away From Her, from Canadian director Sarah Polley – the issue remains socially overlooked.

Clair’s decline wasn’t linear: there were good days and bad days. As with her shifting awareness, Clair’s physical affection for her husband was also “on-again, off-again.” Kirkpatrick gauged his wife’s interest and her consent by asking, listening and by watching for cues – by “being cautious and going slowly.”

“If I wanted to be closer, I’d kiss her forehead or rub her back, caress her,” he said. “Usually, but not always, she seemed responsive.”

Clair was moved into long-term care in 2011; the last time the couple made love was in her private room. Worried about discretion, Clair grew uncomfortable and pulled away.

“How do you not personalize something that’s quite personal, like the intimate marriage we had enjoyed up until that time?” said Kirkpatrick, who sought counselling.

We often discount the “extreme heartache” of families staring down dementia, said Mary Schulz, director of education at the Alzheimer Society of Canada. Spouses need more support and education on this disorder – and on the seismic shifts that hit their marriages. Schulz said husbands and wives also need help coming to terms with a difficult reality: Their spouses’ unsettling behaviour truly isn’t personal.

“At the end of the day, this isn’t about you,” Schulz said. “This is about the best day possible for the person with dementia, when they’re that advanced.”

Retired American Supreme Court justice Sandra Day O’Connor drew headlines in 2007 for supporting her Alzheimer’s-stricken husband of 55 years as he pursued a relationship with another resident at his nursing home. The ailing husband had grown suicidal, but after meeting the new woman, Kay, was like “a teenager in love,” according to his son Scott. O’Connor decided if this brought her husband comfort, it did her, too.

The 2014 case of Henry Rayhons was less sunny. Rayhons was charged with felony sexual abuse of his wife, who’d suffered from severe Alzheimer’s before her death that year. Rayhons, a former Iowa state legislator, was accused of having sex with his wife in a shared room at the nursing home, days after nurses decided she was mentally unable to consent. He was later acquitted.

Sexual consent is a serious, intricate issue for those living with advanced dementia and their partners. So is infidelity, as some nursing home patients with dementia take up with their fellow residents and overlook the fact that they’re already married – just as O’Connor’s husband had.

“We’ve had this, where the wife is very hurt that her husband wants to canoodle with somebody else,” executive director Janet Iwaszczenko said. “But we have resources to help. We have a social worker as well to talk to the wife and to smooth things over.”

Other husbands and wives understand that their spouses aren’t being intentionally cruel – that this is the disease talking.

“Another family member will say, ‘That’s okay. They don’t recognize me. They probably even perceive this other person as being me. As long as they’re happy and it gives them some contentment, [I’m] fine with that,’” nurse practitioner Catherine Bennett said.

Another challenge for spouses involves “informal caregiving.” Family members of people living with dementia spend 26 hours a week on caregiving responsibilities, according to a national report from the Canadian Institute for Health Information released in June. Bracing for their loved ones’ decline, some 45 per cent of caregivers said they felt distressed.

Roger Marple’s common law partner sat next to him when he received his diagnosis of early onset Alzheimer’s at the age of 57.

“She was dumbstruck, same as me,” Marple, now 60, said in an interview from Medicine Hat, Alta.

Marple, who’d worked providing medical surgical supplies with Alberta Health Services, had been forgetting things. One day he sent an inscrutable Excel spreadsheet to his boss, who castigated him but later urged him to see a doctor.

The forgetfulness intruded on his relationship, too. One night, Marple and his partner were booking a holiday to Mexico. As he keyed in their information online, Marple forgot her surname.

“I’m sitting there trying to think and she goes, ‘Oh my God, Roger. You don’t know how to spell my last name?’” Marple said, remembering his embarrassment.

“You can’t hide the disease,” he said. “You forget things. You screw up.”

Following the diagnosis, Marple said his partner grew distant, deflecting whenever he talked about his symptoms. So Marple stopped talking about it. After six years together, she told him she was unhappy and wanted to move on. It wasn’t just the dementia, Marple said, “Although it sure as hell didn’t help.”

Having read testimonials from spouses caring for partners with dementia, Marple says he didn’t blame her. “I was almost relieved that she wouldn’t have to endure this journey,” he said.

Marple’s advice to the spouses of people with dementia is to join support groups and learn everything they can about the disease. He cautioned them not to coddle their partners. If they like playing golf, let them play golf, but at the same time, don’t let them off the hook with laundry, dishes or mowing the lawn. He entreated spouses with dementia to reciprocate: “It’s still a give-give relationship, for as long as possible.”

Today, Marple wants companionship but worries about burdening a girlfriend with a caregiver-patient dynamic. “When things start getting pretty bumpy, you just know it’s going to be hard on your significant other,” he said. “I wouldn’t want them to experience that.”

Writing in Neither Married Nor Single, Kirkpatrick described the final decline of his wife Clair, a clinical psychologist who died in January, 2017. Alzheimer’s had “bleached out” her vocabulary, memory and personality, Kirkpatrick wrote. “I can’t feel anyone,” Clair told him at one point.

In her last days, Clair would stare straight through her husband. As Kirkpatrick realized he was no longer recognizable to his wife, he tried not to take it personally.

“Because she stopped loving you,” he said, “doesn’t mean you need to stop loving her.” 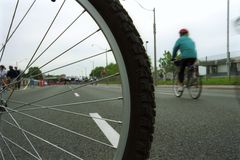 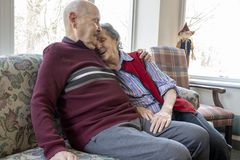