It has no candy coating or cartoon mascot, which makes Kellogg's All-Bran cereal a favourite among health-conscious consumers. But with all the salt it contains, a box of Sugar-Os may be the healthier choice - in Canada, at least.

And it's not just cereal.

Burgers, submarine sandwiches and onion rings sold in Canada by international restaurant chains contain significantly higher levels of sodium than the same products sold in other countries, reveals a new report that is raising new questions about efforts to reduce the country's dangerously high salt consumption, a leading cause of high blood pressure and cardiovascular disease.

"Most people have no idea how much salt they're getting," said Norm Campbell, a professor of medicine at the University of Calgary and Canadian Chair in Hypertension Prevention and Control. "Canadians should be outraged by this."

The analysis was compiled by World Action on Salt and Health (WASH) , an international health-advocacy organization whose membership includes prominent experts who specialize in hypertension.

Using nutrition information available on the websites of food manufacturers, WASH compared more than a dozen fast-food and processed-food items available in a variety of countries around the world. Although the survey was limited to a handful of products, differences in sodium levels from one country to another can likely be extrapolated to a wide range of foods, said WASH co-ordinator and nutritionist Katharine Jenner.

In every product studied, the survey found that the amount of salt differs from country to country. In many cases, sodium levels are highest in Canada and lowest in Britain, which launched an aggressive campaign several years ago to reduce salt consumption.

The report underscores the fact that Canadians are exposed to much higher levels of salt in common fast-food items, such as the McDonald's Big Mac, than people who live in other countries. For instance, onion rings sold by Burger King in Canada contain 620 milligrams of sodium per serving, the highest of any country surveyed, compared with 200 milligrams per serving in Britain.

Burger King Corp. did not respond to a request for comment, and no company contacted agreed to an interview on sodium. Several, including KFC Canada and McDonald's Restaurants of Canada Ltd., declined an interview request but sent a statement via e-mail.

A McDonald's Canada spokesman said the company reviews its menus frequently, while KFC Canada said sodium levels may be higher in one country than another due to consumer preference.

Kellogg Canada Inc. also declined an interview request, but said in an e-mail statement that "geographical variances in consumer taste preferences and ingredient supplies" explain why some of the company's products contain different amounts of sodium in different countries. The company's products contain "the minimum amount of sodium needed to meet consumers' taste preference in new products," according to an e-mail statement from Christine Lowry, vice-president of nutrition and corporate affairs.

The report undermines the basic argument some food manufacturers use to reject calls for swift action to reduce the amount of salt in their products - namely, that doing so would require a complex and costly product-reformulation process.

"These companies could quite easily reduce salt in all of the countries to the lowest level of the country that is currently there," said Graham MacGregor, chairman of World Action on Salt and Health and a professor of cardiovascular medicine at St. George's Hospital in London. "They have a moral and ethical responsibility to do so."

In addition to All-Bran, the WASH survey identified major variances in sodium levels in other Kellogg cereals. A 100-gram portion of original Special K, for instance, contains 931 milligrams of sodium in Canada, compared with 450 milligrams in France, Norway, Britain and a number of other countries, and 400 milligrams in Turkey.

Everyone needs salt, also known as sodium chloride, to live. But the average Canadian consumes nearly 3,100 milligrams of sodium a day, according to Statistics Canada, more than double the daily recommended amount for adults.

That amount is also higher than the upper tolerable limit for all age groups, beyond which the risk of health problems increases.

But the problem isn't in the salt shaker. Up to 80 per cent of the sodium Canadians consume comes from packaged or processed food, including fat-free salad dressings, breads, canned vegetables and pre-made meals.

A growing number of experts, such as Dr. Campbell, are calling for immediate action to educate consumers about the dangers of excessive sodium consumption, along with measures to encourage or force food manufacturers to bring levels down.

The federal government has created a working group to examine the problem and propose solutions, but it has yet to release a plan. 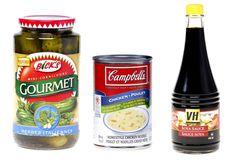