The Question: I have two excellent doctors: A brilliant male doctor whose Pap tests are rough, and a female who works four days a week and has cancelled almost a third of our appointments due to illness. My 21-year-old daughter is not sexually active but needs birth-control pills for her complexion. I would like to keep our female doctor for our Pap tests and our male doctor for everything else. Am I obliged to let them know?

The Answer: The Pap test, I think it is fair to say, is universally disliked. No woman likes having a metal object inserted into her body, then expanded. I doubt it would rate as the highlight of any doctor's day, either. Most physicians do them dispassionately, with the same level of interest they would display changing a tire. It's an important, yet routine part of the job.

Most patients see the procedure, which takes a few minutes, as a "discomfort they have to tolerate," according to Frank Martino, chief of family medicine at William Osler Health Centre in Brampton. Having said that, he's heard of cases where there are two physicians for one patient where the female physician does the Pap test (which is a test that looks at the cells of the cervix).

Personally, I think it's an arrangement that's hard to keep quiet. Pap tests are typically required every year once you start having sex, then every two to three years after having had normal tests three years in a row. At some point, your male physician is going to suggest you or your daughter have one and you will need a ready response.

I find the easiest thing to remember is the truth. If you have two doctors, be upfront with both. You could tell your male physician you have a female who does Pap tests because it hurt a lot the last time he did one.

But before you do that, think about whether you want them both. What if you or your daughter develops a serious gynecological condition? Which doctor is going to be in charge of your care? With two physicians, things are at risk of falling through the cracks because neither may feel in charge. If you insist on having both, one must be in charge.

I don't think for a minute that you should expose yourself to a doctor who hasn't mastered the Pap test and the equally uncomfortable gloved internal examination of the vagina, uterus and ovaries that typically follows.

"Some are clumsy, others are more finessed. Some may be rough and not know it," Dr. Martino said in a telephone interview. "The doctor may be nervous and may not gently insert the speculum. But the patient may be nervous because it's a male physician and contract her pelvic muscles and make that experience a little more painful."

I'm guessing your doctor is the rough-but-doesn't-know-it type but you say he's brilliant, so why not explain things to him. If you feel particularly daring and want to try it again, why not ask if he could use a different speculum, make it warmer, or even turn on the water or radio or whatever might help get you through it. See it as a public service for all those women who are grimacing in the stirrups, wishing it would just be over already.

The Patient Navigator is a column that answers reader questions on how to navigate our health-care system. Send your questions to patient@globeandmail.com. 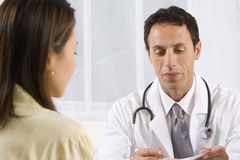