In the beginning, breast is still best, but in the long run, it's more or less the same as the bottle.

That's the finding of an exhaustive and landmark breastfeeding study published in the journal Social Science & Medicine last month, which looked at thousands of children from a variety of cultural and socioeconomic backgrounds over a period of 14 years. When looking across families, researchers from Ohio State University confirmed what the medical establishment generally accepts to be true: that children who were breastfed did better in terms of long-term health and academic success.

But – and this is crucial – the study also looked at several hundred families in which one child was exclusively breastfed and another exclusively formula-fed. When comparing within families, researchers found the benefits of breastfeeding to be almost non-existent.

It's an astounding result, if only because it proves that the accepted wisdom about breast milk – that it's a magical elixir of life, which, if administered exclusively and at length, will provide your child with long-term protection from everything from obesity to idiocy – is simply not true.

I'm not saying breastfeeding is without benefits. It has been definitively proven to boost health and immunity in newborns. It's also healthy, free, organic and convenient if it works for you. But will it ensure your child is going to live a good life? Nope. A far better predictor of that is to look in the mirror. Are you rich, healthy and highly educated? Then your child will likely follow suit. Are you poor, obese and illiterate? Same goes.

Sorry lactivists, but it seems that over the long term, breastfeeding is comparatively less important than such factors as reading, sleeping, solid-food diet, exercise and play – but does anyone ever tell you that as a new mother? No! All the health-care workers I met assured me there was a direct link between my willingness to breastfeed exclusively for the first six months of my son's life and intermittently until he was two (the amount recommended by Health Canada, the World Health Organization and the U.K. National Health Service) and his future IQ and long-term health prospects. So I did what I was told, because it seemed so important.

But will this new hard evidence cause public health agencies in rich Western countries (in which water quality is not an issue) revise their extreme position on extended breastfeeding? Will they quit implying that women who choose not to do it – because they're exhausted, they need to work, or their nipples resemble minced sausage – are putting their children at risk?

I very much doubt it. And that's because the debate about breastfeeding isn't about breastfeeding any more. It's about all sorts of other fraught stuff, such as feminism and public nudity and parenting philosophies. Just this week thousands of breastfeeding women demonstrated in the U.K. after a Staffordshire mother was allegedly called a "tramp" on Facebook for breastfeeding in public. In Ottawa, a woman caused a brief stir after she complained to the news media and on a Facebook site that an IKEA employee had allegedly called her "disgusting" for breastfeeding her baby in a store lineup. The retailer apologized, but after reviewing its video footage found no evidence of any altercation, nor did the woman even have her baby with her in the lineup.

The point is, the "debate" about breastfeeding is propped up with straw men. Breastfeeding in public is accepted now in most affluent Western countries and there is no need for public protest because of Facebook postings. But lactivists seem to still need something to rail against now that their cause has been fought and won.

We've come a long way from the 1950s, when my grandmother gave birth to her five children under general anesthetic. And the 1970s, when my mother gave birth on her back in wrist restraints and was then discouraged from breastfeeding because it was a hassle for the maternity ward nurses. Women today owe a great deal to organizations such as La Leche League and the U.K.'s National Childbirth Trust.

The correction has been made, public outreach has been successful: Most women in Canada are well aware of the "natural option" when it comes to birthing and feeding their babies. If anything, however, these organizations have grown louder and larger and more powerful. And how do they do this? At least in part, by exaggerating, either explicitly or implicitly, the benefits of breastfeeding and the dangers of opting not doing so.

Nearly 90 per cent of Canadian women now start off breastfeeding, but less than a third of them continue exclusively for six months. Health Canada, the Canadian Paediatric CCT Society, Dietitians of Canada and the Public Health Agency of Canada have all invested time and resources running campaigns to encourage women to continue breastfeeding. But if these agencies are serious about improving maternal and child health, wouldn't they be better off focusing on issues that have demonstrable long-term consequences – such as affordable day care, flexible work hours and better benefits for mothers, and outreach and support for low-income mothers or parents at risk?

It's time for the lactivists to back off. Anything else simply sucks for mothers. 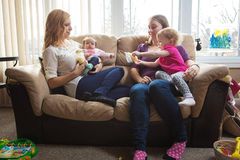