Doctors fear Canadians won't bother to get vaccinated when faced with a future influenza pandemic - or even to get their annual flu shot now that the season is upon us - after so many sailed through last year's global infection unscathed and unimmunized.

Three out of four of the 20,855 Canadians who took part in the Canadian Community Health Survey and who did not get the H1N1 vaccination in 2009 said they simply did not believe it was necessary. Another 13 per cent said they just didn't get around to it.

That blasé attitude toward vaccination came even after public-health experts repeatedly warned that the disease could claim many lives and that no segment of the population was certain to be spared.

The findings of the survey, which was conducted between January and April of this year, were published in the December issue of Health Reports, a Statistics Canada compilation of recent health research.

In the end, although 428 people died and more than 8,000 people were hospitalized, the H1N1 pandemic was not as bad as the worst-case scenarios had predicted.

This has left doctors wondering whether large numbers of Canadians will point to the pandemic experience of 2009 as justification for not getting vaccinated should a new strain of influenza develop in the future. Most experts believe that the next pandemic is likely a decade or more away, but they fear that when it occurs, people will accuse the health-care community of crying wolf.

"That's the challenge that we have - how to engage with the public and explain risk," said Scott Halperin, director of the Canadian Center for Vaccinology at the IWK Health Centre in Halifax. Doctors, he said, must dispel the notion that "it missed me this time, therefore I was right not to get it."

It's impossible to accurately assess the protective effect of the vaccine that was rolled out through November and December last year, just as the second wave of the pandemic was reaching its peak, Dr. Halperin said.

"The question is, what would that second peak have looked like had we not had the population immunized? Would it have been a larger, broader, more prolonged peak? Would there have been a third wave? None of these things we really can tell," he said.

Studies released earlier this year show that about 11 million people, or 41 per cent of the adult population, got the H1N1 shot - with participation varying dramatically across the country from a high of 69 per cent in Newfoundland to a low of 32 per cent in Ontario.

Andrew Simor, a disease expert at Sunnybrook Research Institute in Toronto, said the fact that just two in five adult Canadians were vaccinated when confronted with the first pandemic in four decades cannot be called a success.

"Certainly in the setting of a pandemic you want higher rates and, as we know, there's been a lot of discussion about the failure of our vaccine policy during the pandemic. We were just very fortunate that it was a relatively mild pandemic," Dr. Simor said.

Like Dr. Halperin, Dr. Simor worries that the experience will feed a feeling of imperviousness, not just in the case of a future pandemic but also in terms of the seasonal flu.

The reality is most people do not suffer a life-threatening illness when they come down with a case of the seasonal flu, Dr. Simor said

"But, in an average year, 5,000 or 6,000 Canadians die related to influenza. That's a pretty substantial burden of disease. And there are many more who end up in hospital or lose time from work," he said.

Elderly people, pregnant women and people with chronic underlying issues like lung ailments, heart trouble, kidney disease, or cancer can all fall seriously ill with influenza. And people who get vaccinated, even when they are healthy, he said, are less likely to spread it to those who are not - whether it's a seasonal outbreak or a pandemic.

Children rarely succumb to influenza. But "they may be visiting with their grandparents who are a little more frail and who can't tolerate influenza as much," said Dr. Simor, "and it's the children who bring it into the home and infect the grandparents who end up in hospital with pneumonia and potentially dying from it." 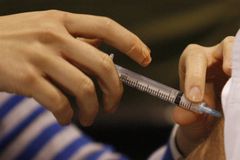 Opinion
If only there were a shot against irrational fears
January 29, 2011
New flu vaccines work to reduce pain
December 27, 2010 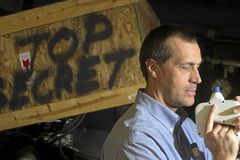 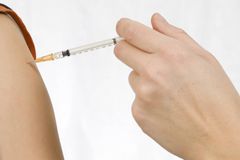 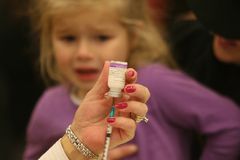 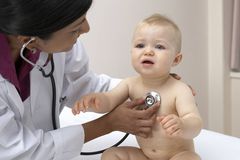 Why is there no national vaccination strategy?
December 8, 2010
Follow Gloria Galloway on Twitter @glorgal
Report an error Editorial code of conduct
Due to technical reasons, we have temporarily removed commenting from our articles. We hope to have this fixed soon. Thank you for your patience. If you are looking to give feedback on our new site, please send it along to feedback@globeandmail.com. If you want to write a letter to the editor, please forward to letters@globeandmail.com.
Comments