Now, a study published online in the International Journal of Obesity suggests this proverb contains sound advice toward a leaner body and better health.

According to the new findings, starting your day with a high-fat breakfast - and eating a lighter evening meal - can offset weight gain and lower the odds of metabolic syndrome.

A person is thought to have metabolic syndrome if he or she has a large waist circumference plus two or more of the following: high blood triglycerides (blood fats), high blood pressure, elevated fasting blood glucose and low HDL (good) cholesterol. The condition is thought to double the risk of heart attack and increase fivefold the likelihood of developing Type 2 diabetes.

In the study, researchers from the University of Alabama at Birmingham examined how meal composition and timing affected the development of metabolic syndrome in mice.

When mice were fed a high-fat meal at the beginning of their active phase (upon waking), they maintained their weight and did not develop any features of metabolic syndrome. In subsequent meals, they were able to adjust their food intake and calorie burning to maintain a normal weight.

By contrast, eating a carbohydrate-rich meal at the start of the day led to metabolic disorder. The mice experienced weight gain, increased body fat, glucose intolerance, high triglycerides and other markers of metabolic syndrome.

When mice were fed a high-fat meal at the end of the day, their body weight increased, as did the risk of metabolic syndrome.

The researchers speculate that the first meal you eat programs your metabolism for the rest of the day. Fat intake at the time of waking is thought to turn on fat metabolism and help the body efficiently burn different types of food later in the day.

If the findings from this study translate to humans, it means that eating a carbohydrate-rich morning meal, such as cereal and toast, seems to "fix" your metabolism toward using carbohydrate for energy and impairs the body's ability to burn fat later in the day.

A higher-fat breakfast, on the other hand, promotes a more flexible metabolism that can burn energy from fat and carbohydrate.

In other words, if you want your metabolism to respond efficiently to mixed meals during the day, then a higher-fat breakfast (think cheese, nuts, seeds, nut butter) - and a lower-fat dinner - could help prevent weight gain and keep metabolic syndrome at bay.

It's the opposite of what most of us do. We tend to eat a high-carbohydrate breakfast and then increase our fat and calorie intake at later meals.

Previous research has hinted that time of eating matters when it comes to weight control. Studies have shown that individuals who skip breakfast have a greater risk of becoming obese and developing insulin resistance than those who eat the morning meal. People who routinely eat breakfast also tend to consumer fewer calories later in the day.

Conversely, eating later in the day has been associated with weight problems. People who suffer from night-eating syndrome, a disorder characterized by a lack of appetite in the morning and overeating at night, tend to have higher body mass index. Night-shift workers are also inclined to have an elevated BMI as well as a greater risk of Type 2 diabetes and heart disease.

While studies are needed to determine if the new findings hold up in humans, it is possible that adjusting the fat content of breakfast and dinner could help you hold your weight steady.

Adding a source of fat to breakfast can help put the brakes on your appetite later in the morning. And it makes sense to eat a lighter, lower-fat dinner based on previous research indicating the body burns fewer calories to digest an evening meal than it does a morning or mid-day meal.

However, when it comes to preventing metabolic syndrome, and ultimately diabetes and heart disease, research suggests the following strategies should not be neglected.

Shedding weight can reduce blood pressure and fasting blood glucose and raise HDL (good) cholesterol. Trials have demonstrated that modest weight loss (5 to 7 per cent of body weight) and 150 minutes of exercise each week can prevent Type 2 diabetes in overweight people with impaired fasting blood glucose (or pre-diabetes).

A higher intake of red meat, especially processed meat, is linked to a greater risk of metabolic syndrome. It's thought that saturated fat in meat plays a role by boosting blood cholesterol, blood pressure and diabetes risk.

Choose lean cuts of meat and limit portions to no more than three ounces (90 grams) a day. Limit or avoid processed meats such as hot dogs, sausage, deli meats and bacon.

Milk and yogurt (1 per cent milk fat or less) may guard against metabolic syndrome by providing calcium and magnesium, minerals that help promote normal blood pressure and regulate blood sugar. Include two to three servings a day.

A regular intake of whole-grain foods is associated with reduced blood pressure, triglycerides, body weight and diabetes risk and with higher levels of HDL ("good") cholesterol.

Is it better to eat an unhealthy breakfast than to skip it?
May 3, 2018 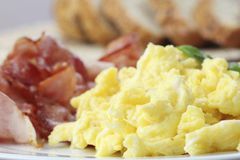 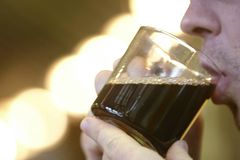 How one man went from anorexia to extreme eater
December 15, 2017 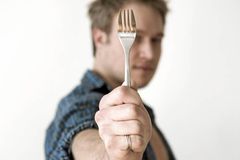 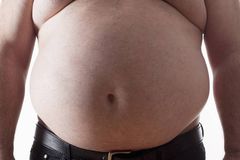