It is difficult for navy veteran Aubrey Francis to talk about the faces that have haunted him for years in flashbacks and in nightmares, but this week, he sat for an interview and compelled himself to recall one of the worst days of his life. His goal: to make others aware of an experimental treatment for post-traumatic stress disorder that has blunted the destructive power of his memories.

"I was in Syria, in 1999, I was with the UN. I was having a stroll through Damascus," Mr. Francis began, sitting in a quiet room in his psychiatrist's house in Kingston, Ont. "It was my weekend off. There was a square, with a statue of the president, covered in flowers, with a nice floral scent. I sat there and had a sandwich and a drink of water. Just outside the courtyard there was a marketplace. A young boy runs past. He might have been no more than 8.

"Two security guards ran in behind, and they grabbed him. He had an orange. He was a little street urchin. One held his arms, the other took out a club and beat his brains out. Before they hit him, he looked at me and I just froze. And the guards looked at me and said, 'What are you going to do, UN?' They beat him and the blood went all over my beret. I walked away. But my life changed that day."

That was one of many horrifying incidents during 20 years in some of the world's most troubled places. Mr. Francis was diagnosed with PTSD in 2003 after returning from a tour in Afghanistan. In 2008, he had to leave the service, suffering from flashbacks, nightmares and other symptoms, until a therapy called neurofeedback delivered some relief. Designed to help people influence the activity of their brain waves, it offers a new approach to a disorder that affects one in 10 Canadians.

"I'm not back to normal, but I am functional. I wasn't functional before. The dreams aren't so intense, the flashbacks aren't so hellish. The terror is not there," Mr. Francis, 42, said.

Neurofeedback is still experimental and costs up to $150 a week. But the idea of using it for PTSD is gaining steam among veterans in Kingston, who are encouraged that Veterans Affairs Canada agreed to cover the cost for many of them.

Mr. Francis first tried the therapy two years ago at the suggestion of his psychiatrist, Janet McCullough.

Dr. McCullough is a clinician, not a researcher, but she and two colleagues did a small pilot study that showed the therapy significantly reduced the severity of PTSD symptoms in 12 veterans. So far, Dr. McCullough has treated more than 40 men.

Many relive traumatic events in dreams or flashbacks that can be triggered by sounds and smells. Some withdraw from family and friends, and many have difficulty sleeping. It is an anxiety disorder, but is linked to depression and addictions to alcohol or drugs, as well as an increased risk of suicide. Treatments include medication and talk therapy.

Neurofeedback was once seen as alternative medicine, but a growing number of preliminary studies suggest it could help with several brain disorders. U.S. researchers are planning trials to see if it can help veterans with PTSD.

During each session, Dr. McCullough places electrodes on the patient's scalp that record brain waves. The pattern goes through an amplifier to a computer that analyzes electrical activity as it occurs. Information is sent back to the patient through audio and visual feedback. Patients wear earphones and listen to music. They also watch constantly moving colourful patterns on a screen. When their brain-wave activity becomes too intense they hear static in the music and see a slight jump or hesitation in the movement on the screen.

"It acts like a rumble strip on a highway," Dr. McCullough said. "The brain self-corrects."

It is unclear exactly how it helps reduce the symptoms. Mr. Francis said he had more energy almost immediately. He is off antidepressants and other medication.

Veterans Affairs recently authorized payment for Mr. Francis to have the system at home. It costs about $5,000, Dr. McCullough said.

Mr. Francis was a cook in the navy, and now has a chip wagon near his home in the Kingston area. His wife, Tracy, said they had put off having children, but last year decided he was well enough. Their son, Perry, is now three months old.

"Three years ago, would I have been able to have a baby? No. Neurofeedback has given me hope," Mr. Francis said. 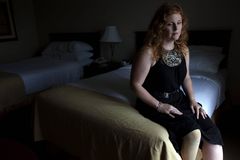 Regina researcher wants to treat soldiers suffering from post-traumatic stress disorder with aerobics
August 7, 2011
Old-fashioned letters reduce post-traumatic stress disorder in soldiers
June 6, 2011
One-quarter of Canadian soldiers return from Afghanistan with mental-health problems
May 30, 2011
Follow Anne McIlroy on Twitter @AnneMcIlroy
Report an error Editorial code of conduct
Due to technical reasons, we have temporarily removed commenting from our articles. We hope to have this fixed soon. Thank you for your patience. If you are looking to give feedback on our new site, please send it along to feedback@globeandmail.com. If you want to write a letter to the editor, please forward to letters@globeandmail.com.
Comments