Anyone who has ever played Wii Fit or participated in any other form of exergaming will tell you that it has an inevitable flaw. Work out long enough in front of a video-game console and you'll realize that you're … exercising in front of a video-game console. Running on the spot in your rumpus room while your avatar on the TV screen wins the track-and-field Olympics might be fun the first few times, but after a while it hardly seems like satisfying exercise.

But that doesn't mean you should throw the baby out with the barbells.

The founders of a new social-networking fitness site called Fitocracy are aiming to prove that the principles of gaming can be almost perfectly applied to exercising. The site has people go on "quests" by performing an array of exercises, and only once those are completed and the required points have been earned can they move up to a new level, just like a classic role-playing game. Add in data-tracking and a social hub of other regular Marios looking to get super and the result may be an obsession to get fit that's just as powerful as your desire to conquer World of Warcraft.

"There are a lot of parallels between exercise and video games," says Fitocracy co-founder Richard Talens. "In both, you're constantly trying to beat your previous best, you're trying to [get to the next level]"

Mr. Talens and his co-founder, Brian Wang, met while freshmen at the University of Pennsylvania. The two men were fitness diehards. They are now both 25, both amateur bodybuilders.

"We kind of recognized each other because we saw each other eating broccoli and tuna in the cafeteria," Mr. Talens says. "We both had a very similar mentality to fitness just because we both grew up very out of shape, we both grew up playing video games and we both saw fitness as like a game."

Fitocracy launched in February and is currently invite-only while it remains in its beta version. There are presently 120,000 users, and another 120,000 on the waiting list, according to Mr. Talens.

Different exercises are worth different points, which, along with the quests themselves, are designed to push people to try new things.

"If you're favourite exercise is worth 200 points and you see another thing that's worth 500 points, you might think, 'Oh, maybe I should try that,'" Mr. Wang says.

Like most video games, Fitocracy is set up so that each new level is more difficult than the one before. A person new to the site might be tasked with running or walking one mile in 15 minutes. Someone very advanced might find himself faced with the widow maker, a perfectly gruelling name for perfectly gruelling barbell squats.

"If you've ever experienced one [set of 20]you kind of want to die afterwards," Mr. Talens says.

Fitocracy is not the only digital tool that is turning exercise into a video game. Nexercise, a new iPhone application, doles out points and medals for completing exercises and allows users to compete against friends.

But Fitocracy is the best example yet of a digital domain applying the basics of games to getting in shape. Besides compelling users to go on "quests," it also allows them to track as much data as they like, whether it is sets and reps or your heart rate during a particular run. Every gamer, after all, wants to know their stats – and brag about them.

The stereotypical image of playing video games may be of someone alone in a dark room, and going to the gym can often be a solitary pursuit, but Fitocracy's most motivating tool may be its social aspect.

Users can join groups where they meet people who share their interests in certain activities and sports, swapping information and ideas. Because the question Mr. Wang and Mr. Talens have in mind ultimately isn't, "How can we make you addicted to a fitness game?"

"It's really kind of, 'How do we get you inside a community of like-minded individuals who can motivate you?" Mr. Talens says. 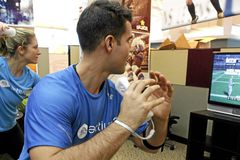 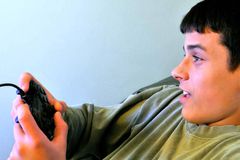